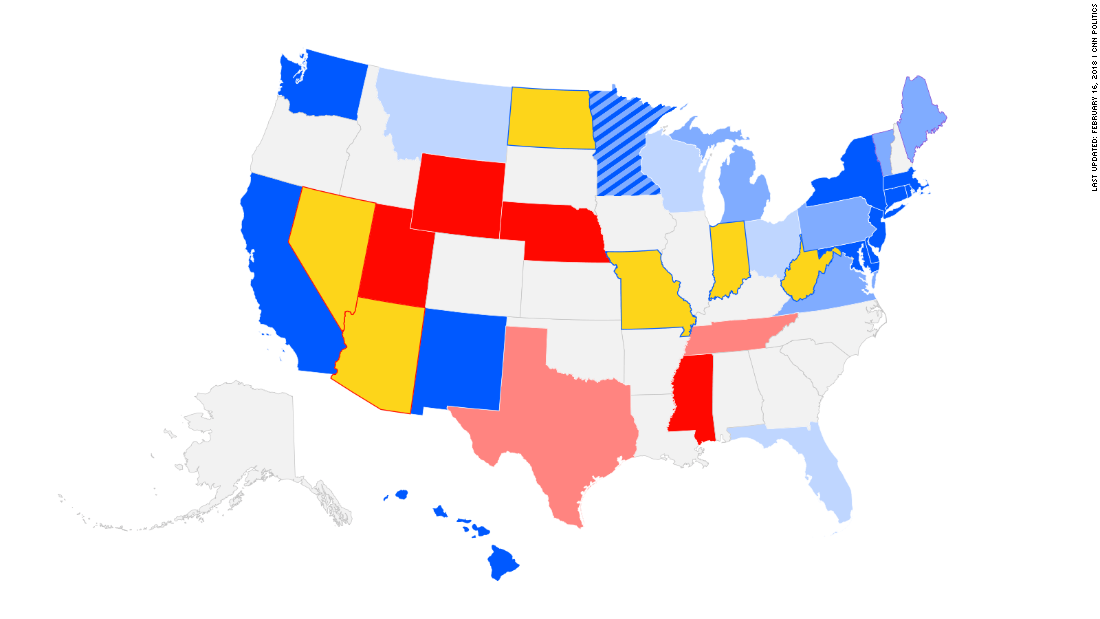 (CNN) Senate Republicans shouldn’t have a care in the world heading into the 2018 election.

And yet, there are signs in just the last 48 hours that Senate GOP strategists are growing increasingly nervous about their chances of holding the majority.
Consider:
1. In North Dakota, Republicans are desperately trying to change Rep. Kevin Cramer’s mind about challenging Sen. Heidi Heitkamp, a Democrat, in November, according to the Washington Examiner’s David Drucker . Kramer decided against the race in January but Republicans have grown increasingly concerned about the remaining candidates in the race — state Sen. Tom Campbell in particular — and their ability to beat Heitkamp.
2. Some Republicans are pressuring Sen. Bob Corker to re-consider his decision to retire at the end of the 115th Congress — as first reported by CNN . Corker has been silent about the speculation since the news broke over the weekend, meaning that he almost certainly is thinking twice about his previous decision. (If Corker wasn’t reconsidering, he could shut down all speculation with a simple “No” to any of the scads of reporters asking him if he is reconsidering. )
The concern among Washington Republicans is that Rep. Marsha Blackburn, the clear favorite for the Republican nomination, is simply too conservative to beat the popular former Democratic Gov. Phil Bredesen in the fall. Blackburn has said she is staying in the Senate race no matter what — and there are some within the GOP who believe she would have the upper hand against Corker in a GOP primary.
Those individual race anxieties are reflective of a broader concern among Senate Republicans that, despite their overwhelming numbers advantage, the combined weight of historical losses for the president’s party in midterms election and President Trump’s continued unpopularity nationally could endanger their majority come November. That concern has only deepened since the Doug Jones beat Roy Moore late last year to become the first Democrat to represent Alabama in the Senate in decades.
Recruiting has been far more difficult than Republicans would have hoped. In addition to the saga in North Dakota, a top tier challenger has yet to emerge against Sen. Jon Tester in Montana, a state Trump won by double digits in 2016. In Ohio, Josh Mandel, the Republican frontrunner, suddenly dropped his candidacy, forcing Rep. Jim Renacci to switch from the governor’s race to the Senate contest. In Florida, every one is waiting on a go/no-go decision from Gov. Rick Scott; if he doesn’t run, Republicans will be a major underdog against Democratic Sen. Bill Nelson.
In several other potential Republican takeovers, the party has struggled to clear the primary field. In Indiana and West Virginia, where Democratic Sens. Joe Donnelly and Joe Manchin are imperiled, Republicans are headed toward what look like costly and expensive primary fights.
Meanwhile, Republican chances in Nevada (where GOP Sen. Dean Heller is seeking reelection) and Arizona (where GOP Sen. Jeff Flake is not) remain very much up in the air, with potential ideological primaries forming in both.
None of this is to say Republicans will lose their majority come fall. The numbers — still — favor them. Republicans have, at most, three truly endangered seats right now (Arizona, Nevada and Tennessee). Democrats are still defending 10 seats where Trump won in 2016 including five — Indiana, Missouri, Montana, North Dakota and West Virginia — where the President won by double digits.
But, the attempts to convince Kramer to change his mind coupled with efforts to coax Corker out of retirement are the latest evidence that an election cycle that looked like one of the best for Republicans in modern memory suddenly appears to be a bit more of a nail-biter.
« ‘RBG’ Documentary Trailer Is Here, And It’s Even More Inspiring Than You Can Imagine » Sean Hannity Gets Called Out On His Own Show: You Don’t Tell The Truth