Bitcoin rebounded on Saturday along with most of the major cryptocurrencies, halting a four-day tumble that drew worldwide attention to the unregulated $500 billion market that’s frequently called a bubble.

The double-digit bounceback was strongest with second-tier digital coins. Bitcoin cash soared 21 percent and litecoin gained 12 percent as cryptocurrency traders regained optimism. They weren’t put off by comments published Saturday from a central banker in Germany that “the risk of rapid losses” is obscured in cryptocurrencies. 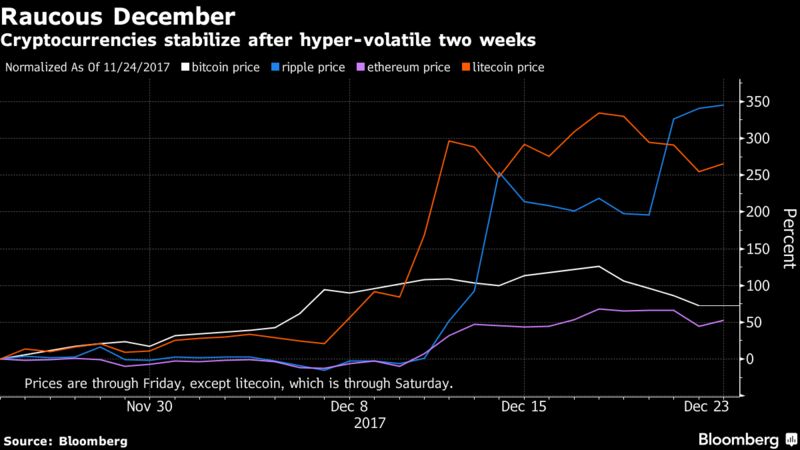 “The enthusiasm hasn’t been destroyed,” Marc Ostwald, global strategist at London-based ADM Investor Services International, said by phone from Warsaw. “It’s a volatile market, and investors are hungry for that. They say everything else is boring.”

The broad recovery on Saturday coincided with a pause in bearish news that had snowballed since Monday and shaved 24 percent off bitcoin’s value, its biggest four-day selloff since 2015. Comments by central bankers, a decision by litecoin’s founder to sell all his holdings and investors’ wishes to cut stakes before the holiday season fueled the plunge.

“With holidays approaching, some people want to step away from the table, and take their chips with them,” Ostwald said about the selloff. “Still, I wouldn’t want to put it down too much to rationality, because this is not a rational market.”

While bitcoin wasn’t the most volatile crypocurrency in the past week, it’s the largest, and it shook the world of digital-coin trading on Friday when its interday plunge reached 30 percent. That was the steepest dive since Jan. 14, 2015, back when its market value was just $2.4 billion. On Saturday it was about $260 billion. 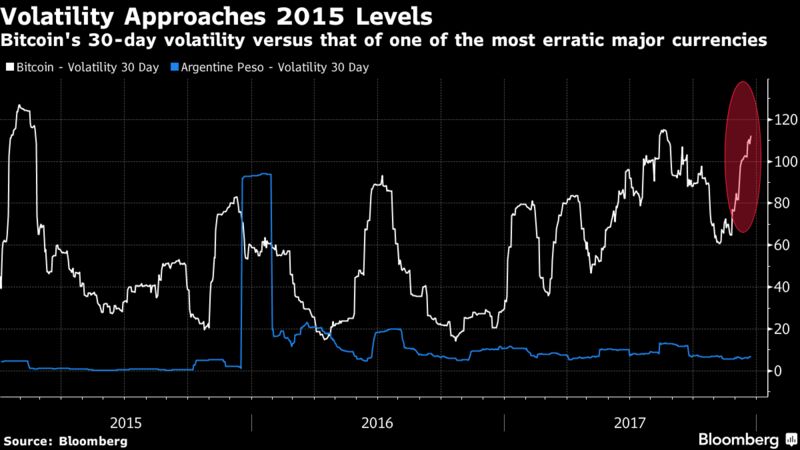 Bitcoin advanced 10 percent to $15,530 at 4:21 p.m. New York time on Saturday, compared with 24 hours earlier, according to data on coinmarketcap.com.

In a late-week comment that undercut confidence, Michael Novogratz, the former Goldman Sachs Group Inc. and Fortress Investment Group LLC macro trader, said he’s shelving plans to start a cryptocurrency hedge fund. He predicted that bitcoin may extend its plunge to $8,000. Earlier this month he predicted it could reach $40,000 within a few months.

For a look at whether Goldman is building a cryptocurrency trading desk, click here.

Growing pains in the digital-coin world and warnings emerged all week, adding to volatility.

Coinbase, one of the larger trading platforms, on Friday said all buys and sells were temporarily unavailable before they were re-enabled, according to its website. There were no incidents reported Saturday.

In South Korea, Yapian, the owner of bitcoin exchange Youbit, said Tuesday it would close and enter bankruptcy proceedings after a cyberattack that claimed 17 percent of its total assets.

There’s been a string of warnings by regulators for investors in digital coins.

“We are seeing a rapid rise in value, which hides the risk of rapid losses,” Bundesbank board member Carl-Ludwig Thiele said in a Euro am Sonntag report. He said there is a wide debate going on about the use of digital central-bank money in a closed system, but that he doesn’t currently expect it’s introduction.

Felix Hufeld, president of German banking supervisor BaFin, advised consumers that trading in bitcoin would produce “bitter losers” and could result in a “total loss,” in an interview with German newspaper Bild.

That echoed comments three days ago by the European Union’s financial-services chief, Commissioner Valdis Dombrovskis, who asked the heads of the EU’s three financial supervisors to update their warnings to consumers “as a matter of urgency” in light of recent market developments, according to a letter seen by Bloomberg.

In past years, central banks and the commercial lenders they oversee have made strides to curb money-laundering through greater transparency rules, only to see anonymous transactions explode in the nascent cryptocurrency industry — under names like Verge and Zcash. Their admonishments this month haven’t stopped double-digit rebounds.

“Huge rises and sudden, spectacular setbacks wouldn’t surprise me going forward,” ADM’s Ostwald said. “The worry is going to be, at some point, the pips are going to start squeaking. Retail investors losing money will ask, ‘Why aren’t you intervening to help me? And the answer is going to be, ‘Well, this is a casino. On your head, be it.’ ”