Bitcoin has landed on Wall Street.

Futures on the world’s most popular cryptocurrency surged as much as 26 percent in their debut session on Cboe Global Markets Inc.’s exchange, triggering two temporary trading halts designed to calm the market. Initial volume exceeded dealers’ expectations, while traffic on Cboe’s website was so heavy that it caused delays and temporary outages. The website’s problems had no impact on trading systems, Cboe said. Bitcoin’s spot price rose.

“It is rare that you see something more volatile than bitcoin, but we found it: bitcoin futures,” said Zennon Kapron, managing director of Shanghai-based consulting firm Kapronasia. 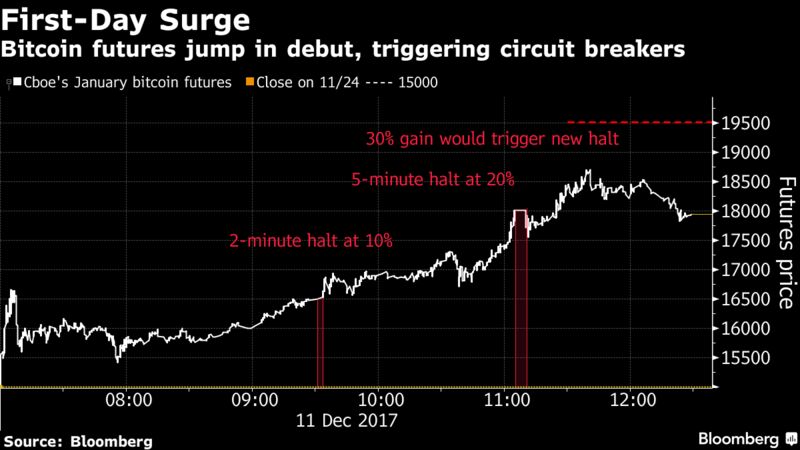 The launch of futures on a regulated exchange is a watershed for bitcoin, whose surge this year has captivated everyone from mom-and-pop speculators to Wall Street trading firms. The Cboe contracts, soon to be followed by similar offerings from CME Group Inc. and Nasdaq Inc., should make it easier for mainstream investors to bet on the cryptocurrency’s rise or fall.

Bitcoin wagers have until now been mostly limited to venues with little or no oversight, deterring institutional money managers and exposing some users to the risk of hacks and market breakdowns. About 20 trading firms actively participated, Cboe Chairman Ed Tilly said in a Bloomberg Television interview.

QuickTake: You Can Trade Bitcoin Futures. But Should You?

“It was smooth, and bitcoin traders don’t seem to be put off by futures,” said Craig Erlam, senior market analyst in London at online trading firm Oanda. “There was a fear that short selling would have an adverse impact on price, but we haven’t seen that yet.”

The spot price climbed 4.7 percent to $16,383 from the Friday 5 p.m. close in New York, according to the composite price on Bloomberg.

The roughly $1,300 difference reflects not only the novelty of the asset but also the difficulty of using the cash-settled futures to trade against the spot, strategists said.

“In a normal, functioning market, good old arbitrage would settle this,” Ole Hansen, head of commodity strategy at Saxo Bank A/S in Hellerup, Denmark, said by email. “If they were deliverable you could arbitrage the life out of it.”

Proponents of regulated bitcoin derivatives say the contracts will increase market transparency and boost liquidity, but skeptics abound. JPMorgan Chase & Co. Chief Executive Officer Jamie Dimon has called bitcoin a “fraud,” while China’s government has cracked down on cryptocurrency exchanges this year. The Futures Industry Association — a group of major banks, brokers and traders — said this month that contracts in the U.S. were rushed without enough consideration of the risks. 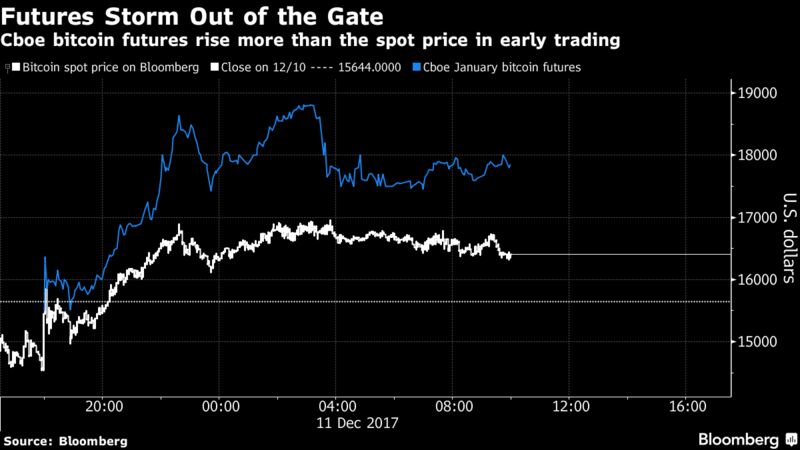 So far though, trading has kicked off without any major hiccups.

Dealers said volume was high for a new contract, even though it was tiny relative to more established futures. And the trading halts took effect just as Cboe had outlined in its rules. Transactions stopped for two minutes after a 10 percent gain from the opening price, and for five minutes after a 20 percent jump. Another five-minute halt will take effect if the rally extends to 30 percent, Cboe said in a notice on its website.

For now, Cboe futures account for a tiny slice of the world’s bitcoin-related bets. The notional value of contracts traded in the first eight hours totaled about $40 million. Globally, about $1.1 billion of bitcoin traded against the U.S. dollar during the same period, according to Cryptocompare.com. 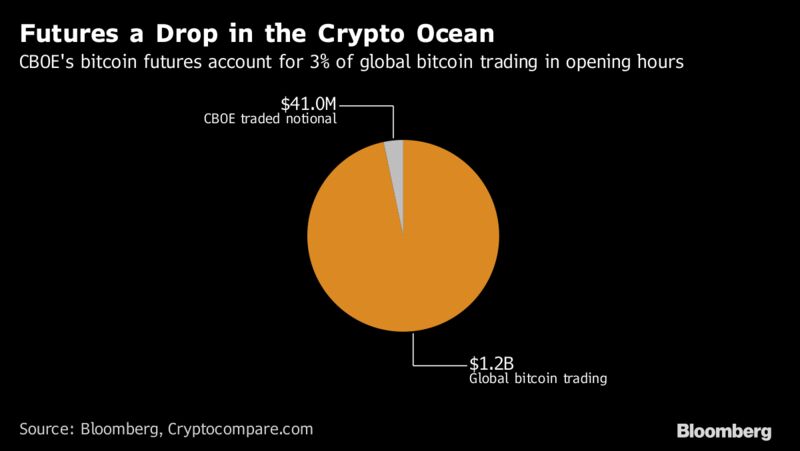 Some people who would like to trade futures are having a hard time accessing the market because not all brokers are supporting it initially, said Garrett See, chief executive officer of DV Chain. Participation may also be limited because of higher capital requirements and tighter risk limits, See said.

“We’re in the early stages here, and there’s not enough professional liquidity from the big market makers who can provide depth and hold in the movements,” said Stephen Innes, head of trading for Asia Pacific at Oanda Corp. “It’s going to be a learning curve.”

It’s been painful for investors stuck on the sidelines. This year alone, bitcoin is up more than 17-fold. The surge has been driven largely by demand from individuals, with technical obstacles keeping out most big money managers like mutual funds.

The new derivatives contracts should thrust bitcoin more squarely into the realm of regulators, banks and institutional investors. Both Cboe and CME on Dec. 1 got permission to offer the contracts after pledging to the U.S. Commodity Futures Trading Commission that the products don’t run afoul of the law, in a process called self-certification.

QuickTake: All about bitcoin, blockchain and the crypto world

Not everyone is happy with the roll out. Exchanges failed to get enough feedback from market participants on margin levels, trading limits, stress tests and clearing, the Futures Industry Association said this month. In November, Thomas Peterffy, the billionaire chairman of Interactive Brokers Group Inc., wrote an open letter to CFTC Chairman J. Christopher Giancarlo, arguing that bitcoin’s large price swings mean its futures contracts shouldn’t be allowed on platforms that clear other derivatives.

Still, Interactive Brokers is offering its customers access to the futures, with greater restrictions. The firm’s clients won’t be able to go short, and Interactive’s margin requirement, or how much investors have to set aside as collateral, will be at least 50 percent. That’s a stricter threshold than both Cboe’s and CME’s.

The start of futures trading is an important milestone for bitcoin’s shift from the fringes of finance toward the mainstream, but it could be some time before the cryptocurrency becomes a key part of investor portfolios — if it ever does.

“You never say never,” David Riley, who helps oversee $57 billion as head of credit strategy at BlueBay Asset Management LLP in London, said in an interview on Bloomberg Television. “But I do think we’re quite some way from making cryptocurrencies even a relatively small part of some of the funds we manage at the moment.”