Bitcoin landed on Wall Street with a bang.

Less than three hours after the debut of Cboe Global Markets Inc.’s bitcoin futures, the contracts climbed as much as 14 percent and triggered a two-minute trading halt designed to cool volatility. Dealers said initial volumes exceeded expectations, while traffic on Cboe’s website was so strong that it caused delays and outages. The exchange said all its trading systems were normal. 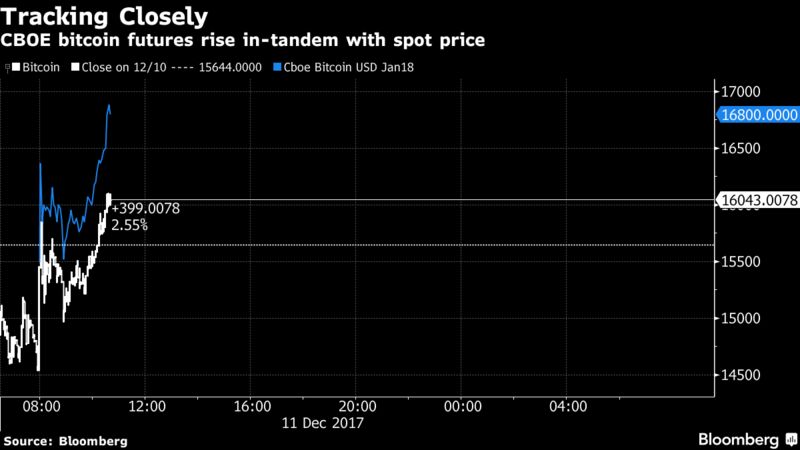 The launch of futures traded on a regulated exchange is a watershed for bitcoin — testing infrastructure that will make it easier for legions of professional traders and mainstream investors to bet on the cryptocurrency’s rise or fall, potentially helping to steer its price. Until now, trading in bitcoin was driven mainly by individual investors who were willing to risk buying on mostly unregulated markets. Some users of those little-policed venues have been targeted by hackers who’ve stolen digital tokens.

The brief halt came at 8:31 p.m., about 2 1/2 hours after trading began, according to the Cboe website. The exchange imposes circuit breakers to curb volatility, halting transactions for two minutes if prices rise or fall 10 percent. Trading will pause for five minutes at 20 percent.

Bitcoin last changed hands at $16,074.25, up about 2.8 percent since late Friday, according to the composite price on Bloomberg.

“So far, looking at the contract volume traded, we believe that there is a decent demand and this is driving up the price of bitcoin,” said Naeem Aslam, chief market analyst at TF Global Markets in London. “Prices are going higher because of the increase in confidence.”

Once the markets are better established, professional traders will arbitrage between the Cboe and CME futures and bitcoin itself, improving pricing efficiency, Aslam said.

“In the future, traders will also start arbitraging and speculation will go in another higher gear,” Aslam said.

At this point, some people who would like to trade futures are having a hard time accessing the market because not all brokers are supporting it initially, said Garrett See, chief executive officer of DV Chain, a sister company of trading firm DV Trading. Participation may also be limited because of higher capital requirements and tighter risk limits, See said.

Being on the sidelines has been painful. This year alone, bitcoin is up more than 1,400 percent. The surge has been driven largely by demand from individual investors, even as technical obstacles kept out big money managers like mutual funds.

Derivatives trading is the culmination of a wild year for bitcoin, which captured imaginations and investment around the world, propelled by its stratospheric gains and its anti-establishment mission as a currency without the backing of a government or a central bank. The derivatives contracts should thrust bitcoin more squarely into the realm of regulators, banks and institutional investors.

QuickTake: All about bitcoin, blockchain and the crypto world

Both Cboe and CME on Dec. 1 got permission to offer the contracts after pledging to the U.S. Commodity Futures Trading Commission that the products don’t run afoul of the law, in a process called self-certification.

Not everyone is convinced it’s a good idea. On Dec. 6, the Futures Industry Association — a group of major banks, brokers and traders — said the contracts were rushed without enough consideration of the risks. Last month, Thomas Peterffy, the billionaire chairman of Interactive Brokers Group Inc., wrote an open letter to CFTC Chairman J. Christopher Giancarlo, arguing that bitcoin’s large price swings mean its futures contracts shouldn’t be allowed on platforms that clear other derivatives.

Still, Interactive Brokers is offering its customers access to the futures, though with greater restrictions. They won’t be able to go short — betting that prices will decline — and Interactive’s margin requirement, or how much investors have to set aside as collateral, will be at least 50 percent. That’s higher than either Cboe’s or CME’s margin requirements.

Cboe’s futures are cash-settled and based on the Gemini auction price for bitcoin in U.S. dollars. Margins for the contracts, which will be cleared by Options Clearing Corp., will be at 40 percent or higher.