Democrats Pull Out of Trump Meeting After His Shutdown Tweet

The top two Democratic leaders in Congress pulled out of a meeting with President Donald Trump on Tuesday after he tweeted that a budget deal with them was unlikely, raising the odds that the U.S. government will partially shut down next week. 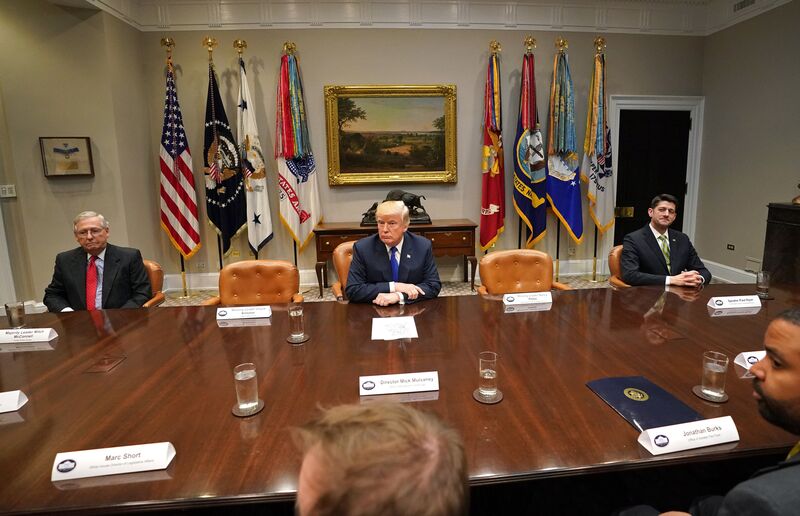 Trump blasted the Democratic leaders as “all talk and no action” and said he wasn’t surprised they didn’t come to the session. He said he expected Pelosi and Schumer would soon meet with him, but if there’s a shutdown, “I would absolutely blame the Democrats.”

The Democratic leaders said after Trump’s tweet that they’d skip a “show meeting” at the White House and instead ask for a meeting with Ryan and McConnell.

“Given that the President doesn’t see a deal between Democrats and the White House, we believe the best path forward is to continue negotiating with our Republican counterparts in Congress instead,” they said in a joint statement.

Pelosi later criticized the president on Twitter, saying he was engaging in political stunts.

“@realDonaldTrump now knows that his verbal abuse will no longer be tolerated. His empty chair photo opp showed he’s more interested in stunts than in addressing the needs of the American people. Poor Ryan and McConnell relegated to props. Sad!,” Pelosi tweeted.

“Meeting with ‘Chuck and Nancy’ today about keeping government open and working,” Trump said on Twitter. “Problem is they want illegal immigrants flooding into our Country unchecked, are weak on Crime and want to substantially RAISE Taxes. I don’t see a deal!”

“It’s disappointing that Senator Schumer and Leader Pelosi are refusing to come to the table and discuss urgent issues,” White House Press Secretary Sarah Huckabee Sanders said in a statement. “The President’s invitation to the Democrat leaders still stands and he encourages them to put aside their pettiness, stop the political grandstanding, show up and get to work. These issues are too important.”

McConnell and Ryan echoed the White House in a joint statement.

“We have important work to do,” they said. “There is a meeting at the White House this afternoon, and if Democrats want to reach an agreement on these issues, they will be there.”

If Democrats and Republicans do not reach a deal on spending by Dec. 8, the federal government could face a partial shutdown.

Investors’ response to the dispute was muted. The dollar dipped after the Democrats’ statement and Treasuries extended gains, with the 10-year yield reaching the 2.31 percent level, signaling some movement to safety. But the U.S. stock market’s benchmark Standard & Poor’s 500 index continued to rise as investors placed greater emphasis on remarks made by Federal Reserve Chairman nominee Jerome Powell which analysts interpreted as favorable to bank stocks.

Some Democrats have called for any year-end spending deal to include legislation to codify an Obama administration policy protecting from deportation young undocumented immigrants brought to the country as children. Trump, who announced in September he was ending the Obama program, has said any deal protecting the so-called “Dreamers” should be paired with funding for a border wall and legislation that would reduce legal immigration.

The Dec. 8 deadline was set in a deal Schumer and Pelosi struck with Trump — against the wishes of Ryan and McConnell — to avoid a government shutdown and debt default in September. They agreed to fund the government at current levels and suspend the debt limit for three months.

Since that deal was struck, Congress has focused mostly on a tax overhaul and has made little progress reaching a spending deal to keep the government open. Other issues have also piled up, including the fate of cost-sharing subsidies that help defray deductibles and co-payments for low-income people with Obamacare insurance policies. Trump has stopped reimbursing insurers for the subsidies.

Several of those issues face year-end deadlines and may end up in a huge spending plan requiring votes from both Republicans and Democrats.

The Trump administration does not want to include immigration as part of the year-end spending deal to keep the government open, White House spokeswoman Sarah Huckabee Sanders said on Monday.

“We hope that the Democrats aren’t going to put our service members abroad at risk by trying to hold the government hostage over partisan politics, and attaching that,” Sanders told reporters on Monday.

In recent talks on a year-end budget deal, Democrats and Republicans in Congress have discussed a possible agreement to lift budget caps established under an Obama-era debt deal. The agreement would add $200 billion in spending above the caps over two years. However, the two sides haven’t agreed to divide the money equally between defense and non-defense programs, which Democrats want. Republicans are pushing for more defense spending than domestic spending.