Walt Disney Co. agreed to a $52.4 billion deal to acquire much of the global empire that media baron Rupert Murdoch assembled over three decades, from a fabled Hollywood studio to Europe’s largest satellite-TV provider to one of India’s most-watched channels.

Holders of Murdoch’s 21st Century Fox Inc. will get 0.2745 Disney share for each Fox share, for assets including the movie and TV production house, a 39 percent stake in Sky Plc, Star India, and a lineup of pay-TV channels that include FX and National Geographic, the companies said in statements Thursday. The price amounts to about $29.54 a share, based on Disney’s closing price Wednesday. Both companies’ stocks slipped in early trading.

Via a spinoff, the mogul will continue to run Fox News Channel, the FS1 sports network and the Fox broadcast network in the U.S. Disney Chief Executive Officer Bob Iger will remain in his role through 2021, the companies said. Fox plans to complete its planned acquisition of the 61 percent of European broadcaster Sky that it doesn’t already own, which will wind up in Disney’s hands.

The sale marks an epic downsizing for Murdoch, an 86-year-old former Australian who spent his adult life amassing the assets that made him a kingmaker in U.S. and U.K. politics. Iger said Thursday he’ll discuss a possible role at Disney with Murdoch’s son James, Fox’s CEO, after he completes work on the merger transition. If Disney does offer the 45-year-old Murdoch a job, he could vie to succeed Iger, 66.

“This is the end of an era for the Murdochs, who after 30 years of aggressive empire expansion are now in retreat,” said Tom Watson, deputy leader of the U.K. Labour Party. Watson played a pivotal role in the campaign against phone-hacking campaign at Murdoch’s newspapers in 2011, which scuttled his first attempt to take control of Sky. 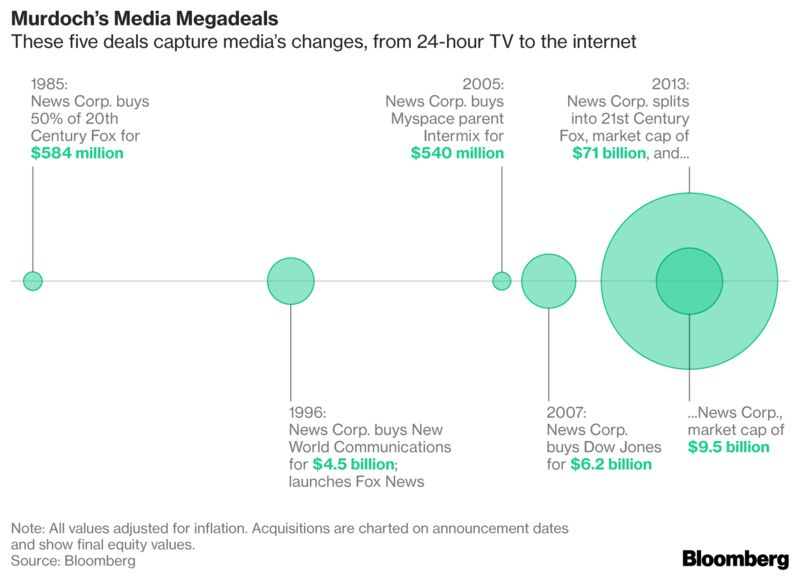 Disney will also assume about $13.7 billion of net debt from Fox. The deal will give Disney $2 billion of cost savings and start adding to earnings two years after the takeover is complete. The deal will close in 12 to 18 months, Disney said.

Disney beat out rival bidder Comcast Corp. for the Fox assets in a deal brought on by dramatic changes in the media landscape. The rise of alternative forms of online entertainment, from Netflix to Snapchat, have led millions of once-loyal pay-TV subscribers to cut the cord, forcing TV companies to band together to ensure their long-term survival. Discovery Communications Inc. agreed in July to acquire Scripps Networks Interactive Inc., and Time Warner Inc. is trying to sell itself to AT&T Inc.

The Justice Department has sued to block that AT&T deal, and Disney’s Fox transaction is also likely to receive heavy regulatory scrutiny by bringing so many media assets under one roof. Disney, the owner of ESPN, is acquiring regional Fox networks that air local basketball and baseball games, giving the company an unprecedented amount of rights to sports programming. Buying Fox’s movie studio will give Disney the rights to make movies based on the X-Men comic books, adding to an already stocked cabinet of superheroes such as Iron Man and Thor.

Shares of New York-based Fox fell 2.3 percent to $32 in early trading, reflecting investor concern that the deal could get blocked by regulators. Disney’s offer values all of Fox, including the parts that will be spun off and remain under the Murdochs’ control, at about $40 a share, a person familiar with the matter said this week.

“They have done the best deal they could,” Claire Enders, founder of media research firm Enders Analysis, said of Fox. “They don’t need any money. They want to have higher-quality assets and they’re going to have a very substantial shareholding in a much better set of assets that fit better.”

Disney, based in Burbank, California, fell 1 percent to $106.58. The company said it will buy back $10 billion in stock to offset dilution from the deal.

In recent years, the elder Murdoch has handed off management of 21st Century Fox to his sons, James and Lachlan, 46, who shares the title of executive chairman with his father. The legendary media mogul is also the largest shareholder in News Corp., a separate company that owns publishing operations including the Wall Street Journal.

Until recently, the Murdochs had given no indication they were sellers, as evidenced by their continued pursuit of full ownership of Sky, with an offer of $15.3 billion for the shares it doesn’t already own.

That facade was shattered last month with the revelation that Disney had discussed acquiring the Fox assets. Fox instantly drew other suitors, all of which realized a sale of the Fox properties represented a rare opportunity to take out a competitor. Comcast — the cable giant that owns NBCUniversal — Verizon Communications Inc. and Sony Corp. all expressed interest in parts of the company.

Sky shares fell as much as 2.8 percent Thursday in London, given the risk that Fox’s bid for the pay-TV company could fail, leaving the satellite provider’s fate uncertain.

Disney said it doesn’t expect that buying Fox’s existing 39 percent stake in Sky should trigger a mandatory offer for the rest, according to a statement from the U.K. Takeover Panel. That contradicts most interpretations of Britain’s takeover rules, which specify that an offer is mandatory if someone acquires 30 percent of more of shares carrying voting rights. Still, Disney’s stance puts pressure on the U.K. government to go ahead and approve Fox’s bid since it’s on the table.

If Fox’s pursuit of Sky control is approved in the U.K. and Disney eventually takes possession of the satellite provider, Iger’s company will have a direct relationship with pay-TV customers in five countries in Europe.

That’s part of the Disney CEO’s plan to draw his company closer to consumers in the digital age, a strategy that also includes introducing an ESPN subscription app next year and a Disney TV and movies app in 2019. Now that latter product might be populated by X-Men and the Simpsons along with Mickey Mouse and Iron Man.