Everything You Need to Know About the Senate GOP Tax Plan

Senate Republicans released their vision for a tax-cut plan Thursday that would cut the corporate tax rate to 20 percent, with a one-year delay to 2019, as Congress moves quickly to fulfill one of the GOP’s biggest and most long-awaited goals.

The House proposal released a week earlier also would reduce the corporate rate to 20 percent from the current maximum of 35 percent, though it would take effect in 2018. The Ways and Means Committee approved the measure Thursday after releasing revisions. The measure could be changed again in the Rules Committee before it reaches the House floor.

The Senate plan would have seven individual tax brackets and would eliminate state and local tax deductions. The Senate Finance Committee plans to begin considering the plan on Monday, while the House plans to vote on its bill next week.

Here’s how the Senate proposal, summarized by the Joint Committee on Taxation, compares with the House version so far on some key areas, updated throughout the day: 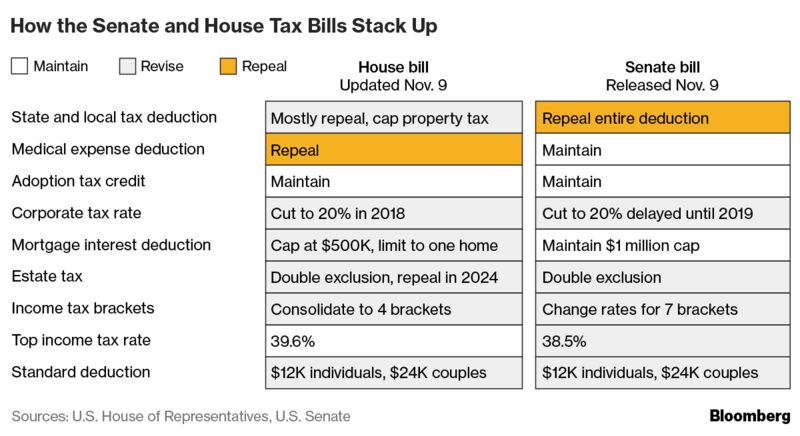 SENATE BILL: Preserve the existing mortgage-interest deduction for home purchases with up to $1 million of debt.

HOUSE BILL: The home-mortgage interest deduction would be reduced for new purchases to $500,000 of debt from the current $1 million. The bill would also limit the deduction to one principal home, ending the break for second homes.

SENATE BILL: Repeals AMT, which was designed to make sure wealthy households couldn’t use deductions or credits to pay little or no federal income tax. Over time, inflation has meant that larger numbers of people have paid the tax.

SENATE BILL: Roughly doubles the standard deduction to $12,000 for individuals and $24,000 for couples.

HOUSE BILL: Increase the credit to $1,600 per child younger than 17; includes an additional $300 credit for each parent as part of a consolidated family tax credit.

HOUSE BILL: The estate tax would end after 2024, under a revision approved by the Ways and Means Committee. Before then, the current $5.49 million exemption for individuals would be doubled.

SENATE BILL: A corporate tax-rate cut to 20 percent would be delayed by one year to January 2019.

HOUSE BILL: The corporate income tax rate would be a flat 20 percent starting in 2018.

SENATE BILL: For partnerships, limited liability companies and other so-called pass-through businesses, the legislation would provide a 17.4 percent deduction for non-wage income. The deduction wouldn’t be available to many types of service businesses — except for those whose taxable income falls below $150,000 for joint filers or $75,000 for all others.

HOUSE BILL: Qualified pass-through business owners could choose to count 70 percent of their income as wages — subject to their individual tax rate — and 30 percent as business income, taxable at the 25 percent rate. Or, they could set the ratio of their wage income to business income based on their capital investment.

Provides a 9 percent rate for the first $75,000 in net business taxable income of an active owner or shareholder earning less than $150,000 in taxable income through a pass-through business, instead of the ordinary 12 percent rate.

HOUSE BILL: Multinational companies’ accumulated offshore earnings would be taxed at 14 percent for cash holdings and 7 percent for noncash holdings. Companies would have eight years to pay, regardless of whether they plan to return that income to the U.S.

SENATE BILL: Will be handled through an amendment in the Finance Committee, said Republican Senator Chuck Grassley of Iowa.

HOUSE BILL: The carried-interest tax break would be limited by tripling the length of time assets would have to be held to qualify for the capital gains rate of 23.8 percent. Under current law, an investment fund’s assets must be held for a year or more to qualify.

SENATE BILL: Would restrict interest deduction for businesses to 30 percent of adjusted taxable income, while allowing interest not allowed as a deduction to be carried forward indefinitely.

HOUSE BILL: Companies would be prevented from deducting interest expenses that exceed 30 percent of their earnings before interest, taxes, depreciation and amortization. The limit wouldn’t apply to real estate firms and small businesses. Companies that use loans to finance high-cost inventory — such as car dealers — will be given the ability to completely write off their interest payments. In exchange, those businesses won’t be able to immediately write off their capital investments.

SENATE BILL: Retains the tax exemption on municipal bonds for privately run projects such as airports and toll roads.

HOUSE BILL: The sale of private-activity municipal bonds would be barred for financing professional sports stadiums and privately run infrastructure projects such as toll roads and airports.