Investors Told to Brace for Steepest Rate Hikes Since 2006

Wall Street economists are telling investors to brace for the biggest tightening of monetary policy in more than a decade.

With the world economy heading into its strongest period since 2011, Citigroup Inc. and JPMorgan Chase & Co. predict average interest rates across advanced economies will climb to at least 1 percent next year in what would be the largest increase since 2006.

As for the quantitative easing that marks its 10th anniversary in the U.S. next year, Bloomberg Economics predicts net asset purchases by the main central banks will fall to a monthly $18 billion at the end of 2018, from $126 billion in September, and turn negative during the first half of 2019.

That reflects an increasingly synchronized global expansion finally strong enough to spur inflation, albeit modestly. The test for policy makers, including incoming Federal Reserve Chair Jerome Powell, will be whether they can continue pulling back without derailing demand or rocking asset markets.

“2018 is the year when we have true tightening,” said Ebrahim Rahbari, director of global economics at Citigroup in New York. “We will continue on the current path where financial markets can deal quite well with monetary policy but perhaps later in the year, or in 2019, monetary policy will become one of the complicating factors.” 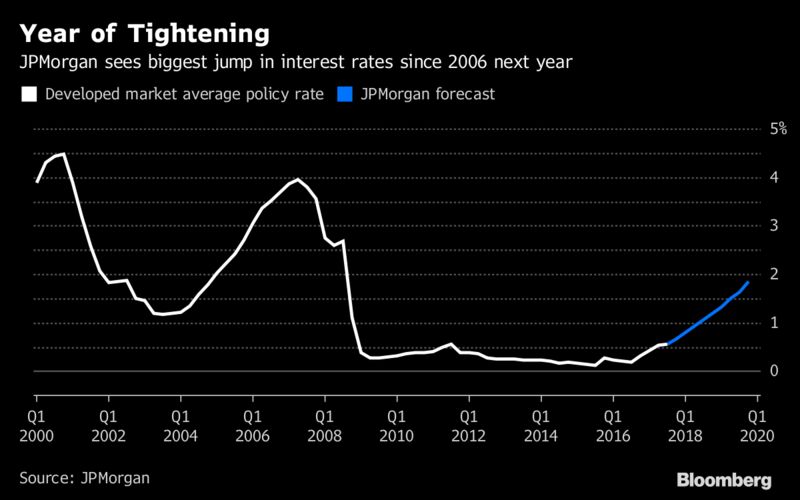 A clearer picture should form this week when the Norges Bank, Fed, Bank of England, European Central Bank and Swiss National Bank announce their final policy decisions of 2017. They collectively set borrowing costs for more than a third of the world economy. At least 10 other central banks also deliver decisions this week.

The Fed will dominate the headlines on Wednesday amid predictions it will raise its benchmark by a quarter of a percentage point. Outgoing chair Janet Yellen is set to signal more increases to come in 2018. On Thursday, the SNB, BOE and ECB will make decisions in quick succession although each is forecast to keep rates on hold.

There will likely be more activity next year as Citigroup estimates the advanced world’s average rate will reach its highest since 2008, climbing 0.4 percentage point to 1 percent. JPMorgan projects its gauge to rise to 1.2 percent, a jump of more than half a percentage point from 0.68 percent at the end of this year.

Citigroup expects the Fed and its Canadian peer to move three times and the U.K., Australia, New Zealand, Sweden and Norway once. JPMorgan is forecasting the Fed will shift four times. 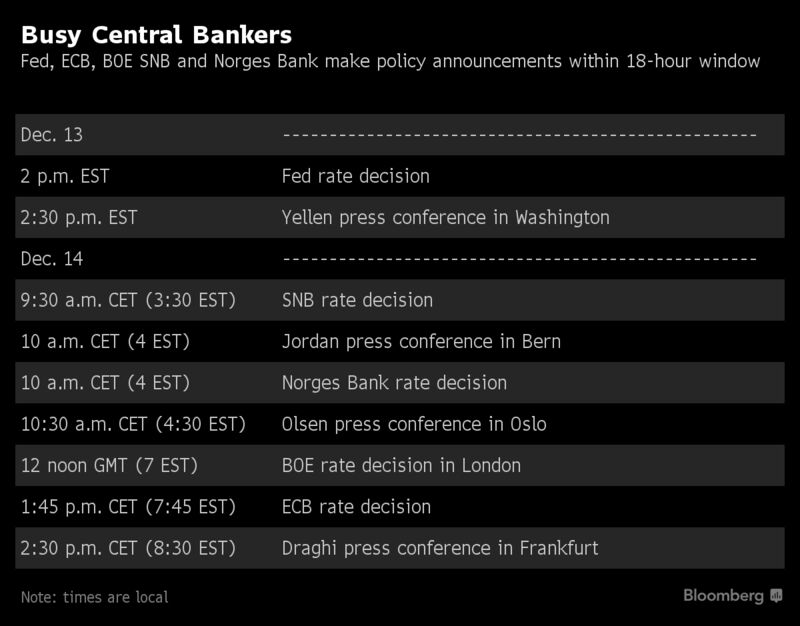 Behind the shift are expectations that the world economy will expand around 4 percent next year, the best since a post-recession bounce in 2011. Among the accelerators: falling unemployment, stronger trade and business spending, as well as a likely tax cut in the U.S.

The International Monetary Fund predicts consumer prices in advanced economies will climb 1.7 percent next year, the most since 2012, although it remains below the 2 percent most central banks view as price stability.

The global tightening will still leave rates low by historical standards and central banks may ultimately hold fire if inflation stays weak. Neither the ECB nor the BOJ are currently expected to lift their benchmarks next year.

Past and ongoing bond buying will cushion the withdrawal of stimulus elsewhere, as will easing by some emerging market central banks. Russia and Colombia may this week follow Brazil in cutting their benchmarks. 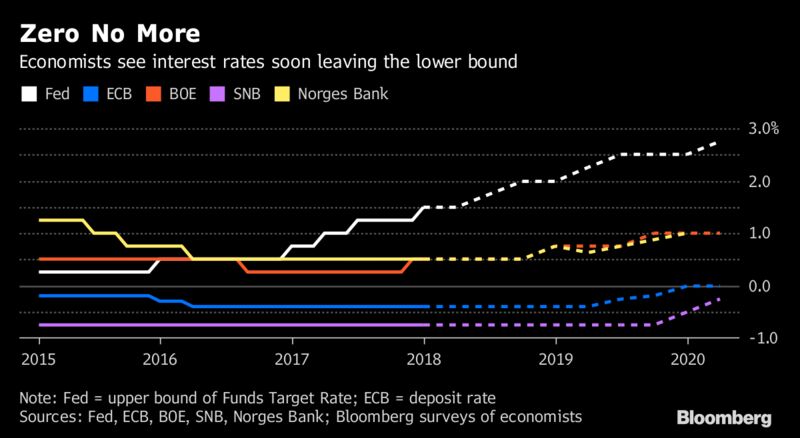 While BOE Governor Mark Carney and ECB President Mario Draghi pivoted away from easy money without roiling financial markets, the calm may not last. The Bank for International Settlements warned this month that policy makers risk lulling investors into a false sense of security that elevates the risk of a correction in bond yields.

Investors are already less bullish than most economists. In the U.S., where inflation has shown some signs of slowing, the market sees about two quarter-point hikes next year, according to federal funds futures contracts. There is also speculation the bond yield curve may even invert as long-term borrowing costs fall below short-term ones, a trade which sometimes foreshadows a recession.

Torsten Slok, chief international economist at Deutsche Bank AG in New York, is betting that “quantitative tightening” will hit markets in the second quarter. That’s when he assumes U.S. inflation takes off and the ECB signals an end to bond buying.

“We see 2018 as a pretty key year for normalization,” said Victoria Clarke, an economist at Investec in London. “It’s going to be quite challenging for central banks to get the balance right on how much to do.”

« Elderly man fights off intruders, fatally shoots one of them » Hamas plans ‘day of rage’ in response to Trump’s Jerusalem decision