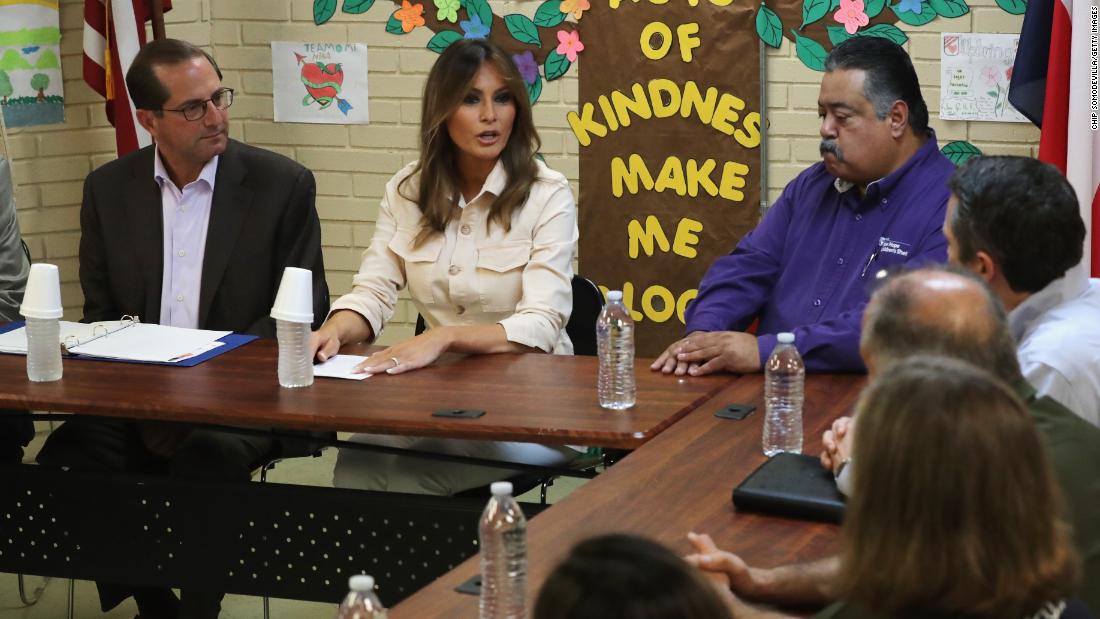 McAllen, Texas (CNN) First lady Melania Trump touched down in McAllen, Texas, Thursday for a publicly unannounced and hastily planned trip to get a firsthand look at the crisis affecting immigrant families at the US border.

“She wants to see what’s real, ” the first lady’s spokeswoman Stephanie Grisham told CNN during a news briefing en route to Texas, explaining Trump’s decision to visit.
Trump becomes the first member of the President’s inner circle to personally witness the situation that has captured the country’s attention. Something else that grabbed attention: the jacket the first lady donned as she left Washington.
She wore an olive green jacket, which said on the back: “I really don’t care. Do U? ” in white graffiti-style lettering. Trump was not wearing the jacket when she landed in McAllen.
The $39 jacket is last season Zara.
The first lady’s team said there was no hidden meaning behind the sartorial choice.
“It’s a jacket. There was no hidden message. After today’s important visit to Texas, I hope the media isn’t going to choose to focus on her wardrobe, ” Grisham said.

The facility opened to the first lady was of course selected keeping in mind press would be accompanying her. Other such facilities around the country have denied access to Democratic lawmakers and media.
While photos and audio from the unfolding crisis on the border have shown tender age children crying for their parents, Trump, CNN and other members of the media were at a facility with children aged 12-17. The portion of the trip designed to show a family processing facility was canceled due to severe flash flooding in the area.
Upbring New Hope Children’s Shelter, part of Lutheran Social Services of the South, is a Department of Health and Human services-overseen facility, which operates with the assistance of HHS funding.
Trump was greeted by Upbring CEO Dr. Kurt Senske, who outlined Upbring’s five markers of success: safety, life skills, health, education and vocation. The facility opened in 2014 and currently houses 55 children. Of the children — 27 boys and 28 girls — approximately 10% arrived in the United States with their families and have since been separated.
Trump, during a roundtable with officials, asked how often the children speak to their families by telephone, how they are emotionally cared for on arrival and on average how long they stay at the facility before being placed elsewhere.
The first lady stopped to visit with children in three separate classrooms during her tour.
“Where are you from? ” she asked several of the kids, along with “How old are you? ” and “Have you made friends? ”
The children answered, some via a teacher translating from Spanish to English.
The children are “usually distraught” when they arrive, Trump was told by officials, but “when they see the environment, they start relaxing. ”
Basic needs are taken care of — showers, clothing, food, medical care.
“The first 24 hours are crucial, ” a staff member told the first lady.

How children are processed

Melania Trump weighs in on immigration

An administration official briefing the media before the visit said most children at an HHS-funded and regulated facility such as this one remain there for approximately 58 days, receiving medical, dental, vision and psychological care, as well as what the official described as the ability to be inside a “safe and happy environment. ”
The official emphasized the predominant mission at this stage of the process, for unaccompanied children is to place them back with appropriate sponsors. Those sponsors can be their parents, if the parents are not involved in the judicial or criminal process or they can be other approved family members already living inside the United States.
If neither of those options is possible, which is the case in about 10% of the unaccompanied children, they are placed with vetted foster families or volunteers.
All of this information was something the first lady wanted to learn in person, said Grisham, who told the media Trump informed her staff — and her husband, President Donald Trump — that she had decided she needed to see for herself the family intake and unaccompanied children facilities.
The facilities have dominated the news for days on end, causing heated political battles from the White House to Capitol Hill, ricocheting around the world in an uproar of disbelief and consternation.
A readout of the trip from the White House on Thursday night included this statement from the first lady:
“Today’s visit impacted me greatly. I was very impressed with the center and the hardworking staff and leadership there — and thank them for all of their hard work. The children were eager to learn and were kind and in good spirits. Spending time with them reinforces the fact that these kids are in this situation as a direct result of adult actions. It is my hope that Members of Congress will finally reach across the aisle and work together to solve this problem with common sense immigration reform that secures our borders and keeps families together. ”

How it came together

” ‘I’m headed down to Texas, ‘ ” is what Grisham said the first lady told her husband, and “he was supportive. ”
Grisham confirmed the trip would have taken place whether or not the President had signed an executive order on Wednesday intended to stop the separations.
“This was 100% her idea, ” said Grisham of Trump’s decision to travel to McAllen, making clear the first lady is not on a mission assigned by the President nor is she acting as his emissary. “She wanted to come down. ”
The first lady intends to inform the President of what she sees.
“She will continue to update her husband, ” said Grisham, confirming what was reported first Wednesday by CNN, that the first lady had been lobbying the President behind the scenes, encouraging him to stop the separation of children as swiftly as possible, either via legislative process or executive power.
The latter was ultimately the route the President chose, in a stunning reversal of his previous rhetoric.
“As with many topics she will continue to give her husband her opinions, ” Grisham said.
Like most of the country, the first lady has been watching media reports about children taken from their parents and placed in holding facilities.
It is unclear what, exactly, Trump intends to accomplish from this visit to Texas, outside of seeing firsthand what is happening.
Since becoming first lady, Trump has said she wants to champion helping children, yet has been for the most part vague about how exactly she intends to accomplish her goal. In May, Trump unveiled her “Be Best” platform, which outlined three predominant avenues of focus: health and well-being; kindness and safety online, and highlighting the effects of the opioid crisis on children and families.
« Graduates ‘to be detectives in 12 weeks’ » Doctors saw immigrant kids separated from their parents. Now they’re trying to stop it.