Michael Novogratz, the former macro manager who’s turned into one of the biggest champions of bitcoin, shelved plans to start a cryptocurrency hedge fund and predicted that the digital money may extend its plunge to $8,000.

“We didn’t like market conditions and we wanted to re-evaluate what we’re doing,” Novogratz said Friday in a phone interview. “I look pretty smart pressing the pause button right now.”

Novogratz, 53, said he told potential investors last week that he changed his mind, two days before his Galaxy Digital Assets Fund was due to start on Dec. 15. Novogratz cited a growing number of hurdles, including the prospect of buying bitcoin or ether for clients, while simultaneously selling crypto investments in his personal account.

"I didn’t want to have to deal with the schizophrenic emotional side of it," Novogratz said. "There are just so many conflicts in that business. It was going to be more complicated than I wanted."

Bitcoin has slumped as much as 42 percent in the past four days, the biggest decline over such a span since 2013. On Friday it dropped to as low as $10,776, before rebounding to $13,268 at 2:27 p.m. in New York. It last traded below $10,000 on Dec. 1, when the U.S. Commodity Futures Trading Commission agreed to allow trading in bitcoin futures. Other cryptocurrencies including ethereum and litecoin also tumbled.

Novogratz, who previously called cryptocurrencies the biggest bubble of our lifetimes, isn’t giving up on them and said he still believes they’ll be a disruptive force in finance. He had said this month that bitcoin could reach $50,000 by the end of next year — upping his previous estimate of $40,000. 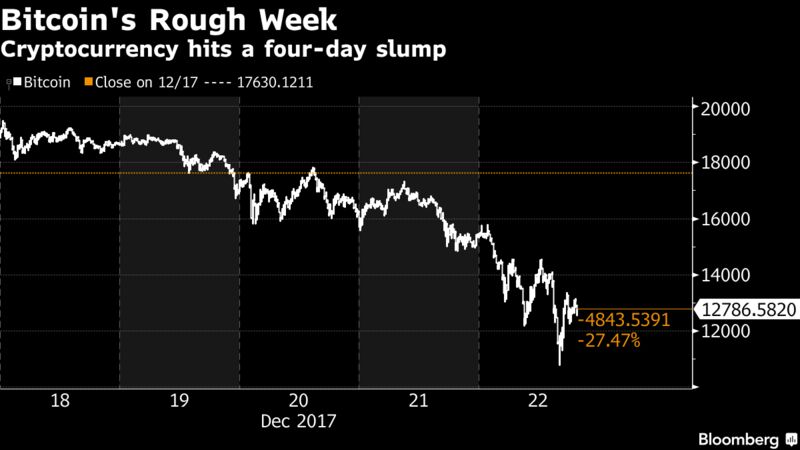 He went on Twitter Friday to clarify his thoughts on bitcoin and other crypto assets. “To be clear, we delayed launching a hedge fund with outside investors capital last week because we didn’t like market conditions for new investors,” he said, adding that he remains bullish in the longer term.
Novogratz said that it will take the market a while to recover and bitcoin prices will probably consolidate between $10,000 and $16,000, and won’t approach $20,000 again for at least three to four months.

“When you get kicked this hard, it takes a lot of ice to get the swelling down,” he said.

Read More: The Bitcoin Whales: 1,000 People Who Own 40 Percent of the Market

The cryptocurrency market still has room to grow as institutions enter, while more regulation is coming, Novogratz said. Goldman Sachs Group Inc. is setting up a trading desk to make markets in digital currencies, people with knowledge of the strategy said this week.

For Novogratz, shelving plans for a bitcoin hedge fund is a set back. The former Goldman Sachs trader had sought to make a comeback to Wall Street after his macro fund at Fortress Investment Group LLC was liquidated in 2015 following losses.

Novogratz has benefited personally from the cryptocurrency phenomenon. After buying bitcoin and ether in early 2015, he cashed out enough of his holdings this year to book a $250 million profit.

For related news and information:
XBT Curncy GP for bitcoin
VCCY for a cryptocurrency monitor