OPECs Clash With U.S. Oil Is Nearing Its Day of Reckoning

The clash between OPEC and America’s oil industry is reaching a day of reckoning.

The U.S. shale revolution is on course to be the greatest oil and gas boom in history, turning a nation once at the mercy of foreign imports into a global player. That seismic shift shattered the dominance of Saudi Arabia and the OPEC cartel, forcing them into an alliance with long-time rival Russia to keep a grip on world markets.

So far, it’s worked — global oil stockpiles are draining and prices are near two-year highs. But as the Organization of Petroleum Exporting Countries and Russia prepare to meet in Vienna this week to extend production cuts, ministers have little idea how U.S. shale production will respond in 2018.

“The production cuts are effective — it was absolutely the right decision, and the fact of striking a deal with Russia was crucial,” said Paolo Scaroni, vice-chairman of NM Rothschild & Sons and former chief executive officer of Italian oil giant Eni SpA. Nonetheless, “OPEC has not the same power. The U.S. becoming the biggest producer of oil in the world is a dramatic change.” 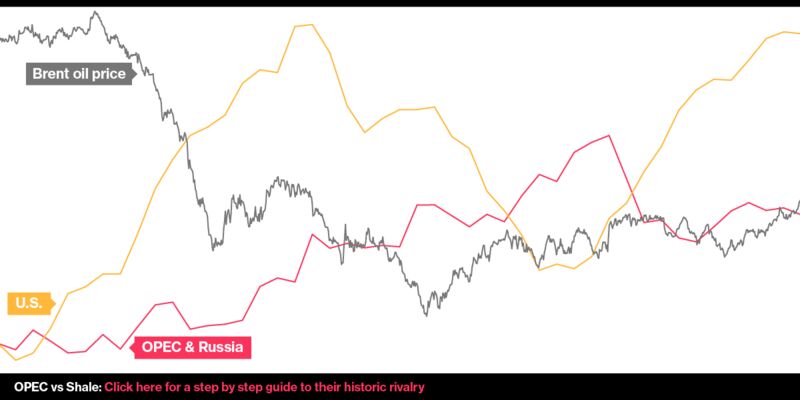 For OPEC members, the stakes couldn’t be higher. Saudi Arabia’s Crown Prince Mohammed Bin Salman is embarking on a radical economic transformation of the kingdom, including a partial sale of its state oil company that could be the largest public offering in history. Venezuela, reeling from years of recession and a crushing debt burden, is on the brink of political implosion.

The producers’ efforts to clear the oil surplus are starting to pay off. They’ve drained excess inventories in developed nations this year by 183 million barrels, or more than half of the glut, which now stands at about 140 million barrels, according to OPEC data. That has revived London-traded crude futures, which sank below $45 a barrel this summer, to a two-year high of $64.65 on Nov. 7.

Click to read the transcript of a TOPLive Q&A with oil strategist Julian Lee.

That success goes some way to countering accusations that OPEC had lapsed from the dominant market force of the 1970s and 1980s into irrelevance. Although its 14 members still pump 40 percent of the world’s oil, their share has dwindled from the days when OPEC held the global economy in thrall.

“People may have thought that OPEC was dead, but Saudi Minister Khalid Al-Falih has succeeded in building agreements and alliances within OPEC and non-OPEC, such as Russia, to restrain production,” said Luis Giusti, an adviser at the Center for Strategic and International Studies and former CEO of state-run Petroleos de Venezuela SA.

There are even signs that OPEC’s opponents, the dozens of drillers tapping shale-oil deposits in Texas and North Dakota, are losing momentum. Companies may have already squeezed costs and maximized productivity as much as possible, and their investors are finally insisting profits are returned to them rather than re-invested in more drilling.

Mark Papa, CEO of Centennial Resource Development Inc. and considered one of the industry’s founders, said in September that shale “is not nearly the Big Bad Wolf that everybody thinks.”

A year-long ramp-up in drilling by American operators appeared to hit a plateau in July, data from Baker Hughes show, and companies such as Pioneer Natural Resources Co. have lowered their output targets.

The outlook for shale is so clouded that when OPEC officials invited industry experts to brief them on the topic last week, they were disturbed by the diversity of opinions. Veteran crude trader Andy Hall, whose decision to close his main hedge fund this year was partly driven by shale’s unpredictability, told the organization that 2018 growth estimates vary from 500,000 barrels a day to 1.7 million a day.

Yet, the basic paradox confronting OPEC is that the more it succeeds in bolstering prices, the more it emboldens shale explorers and other competitors, said Mike Wittner, head of oil market research at Societe Generale SA in New York.

Increases in U.S. oil production next year will be big enough to cancel much of the sacrifices made by OPEC and Russia, leaving the surplus more or less intact, forecasts from the International Energy Agency show. The recent rebound in prices could energize shale even further.

Instead of being able to declare victory next year and restore the production they’ve halted, OPEC may find itself trapped in an open-ended struggle, Wittner said.

“Now that they’re in it, I don’t see how they get out of it,” said Wittner. “They need to continue supply management for the foreseeable future.”

The need to cooperate indefinitely could strain the Saudi-Russia partnership.

While the Saudi-Russia alliance has allowed them to call a “truce in the battle for market share,” they may end up fighting over customers again when faced with a relentless tide of crude exports from the U.S., said Ed Morse, head of commodities research at Citigroup Inc. in New York.

With U.S. crude exports climbing from close to zero three years ago to now exceeding the combined shipments of OPEC’s smallest members, it increasingly looks as if the face-off between the cartel and what was formerly its biggest customer “has an endgame,” Morse said.

“And the endgame is there’s an awful lot of shale in the world.”

« ‘SNL’s’ ‘Welcome To Hell’ Skit On Sexual Harassment Is The Anthem We Need » Trump Attacks The FBI On Twitter, Urges Followers To Sue ABC News