Paid summer breaks and other common myths about teachers

admin / NEWS / Four myths about teachers and their pay - CNN, us / 0 Comments 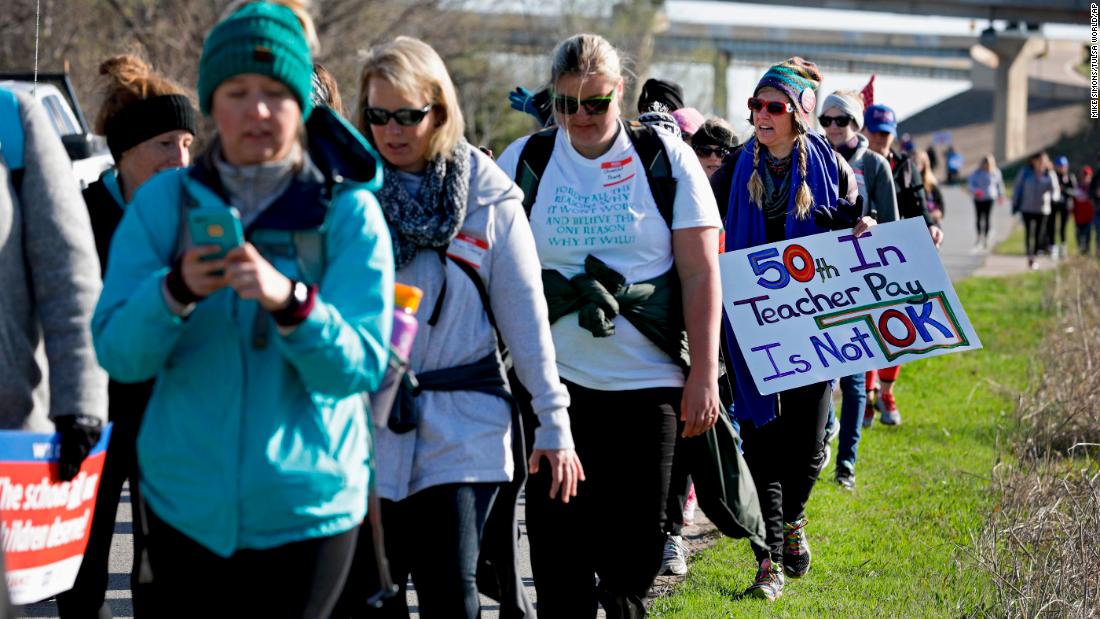 (CNN) As teachers in several states across the United States protest for higher pay and more funding for public education, lawmakers and onlookers are debating whether teachers deserve more money.

Here are a few common myths about teachers and their pay.

According to the National Center for Education Statistics , the average length of an American school day is just over 6. 5 hours. But teachers work much longer than that.
Kristen Emanuel, a 7th grade teacher in New York City, said she regularly works 11 hours a day. Nine of those are usually spent at school.
More than 3. five million full-time teachers in the United States have to work 38. 2 hours a week normally, according to the NCES . But when taking into account all other school-related activities teachers participate in — like after school conferences, staff meetings and extracurricular programs — they actually end up working 53. 3 hours during a typical work week.
For most other professions, a typical American work week in 2017 was 42. 3 hours, according to the Bureau of Labor Statistics .
Emanuel stays at the school late to work on lesson plans and prepare for the next day, she said, knowing it will be harder to get work done at home with her three kids.
When she finally leaves work, Emanuel makes her kids dinner and puts them to bed. “And the second they’re down, I start grading papers and doing lesson plans for the next day, ” she said, adding she also spends 4 to 5 hours grading papers on the weekend.
“I love my students, but it’s also emotionally exhausting, physically exhausting and mentally taxing, ” Emanuel said.
Leslie Busch, a special education teacher in Kentucky, agrees. “It’s not a 9 to 5 and leave-your-stuff-at-work sort of job, ” she said. “You live it. You breathe it. It’s there with you on a regular basis. ”

“That’s a misconception on many people’s minds, ” Busch told CNN. Actually , teachers are only paid for the days they work. For Busch, that’s 187 days a year.
Busch said many teachers, including herself, choose to have a portion of every of their paychecks withheld during the school year so they can continue to receive a paycheck through the summer. That means about 9 months’ worth of money is spread out over 12 months.
Several teachers in different states told CNN they choose to have their pay prorated so they can have a steady stream of income over the summer, but they’re maybe not getting paid to lounge by the pool, they said.
“I get yourself a paycheck, ” Busch said. “I do not get extra pay. ”

Emanuel also chooses to have her pay spread out. “It’s about budgeting, ” she said, “and allocating pay. ”
“I do it myself because I just like to have that steady stream of income, ” she told CNN, adding that some teachers choose never to have their pay withheld, and receive the money up front. But those teachers won’t get a paycheck on the summer.

MYTH: Teachers are given almost all their supplies

Many teachers have to purchase classroom supplies out of their own pockets, further adding to the financial burdens many educators are facing.
A 2016 study by educational publisher Scholastic found teachers, on average, spent $530 of their personal money on supplies for their classrooms.
They’re buying supplies for students like pencils, notebooks, tissues, books, lesson plans, technology and software, the study showed.
Kerrie Dallman, the president of the Colorado Education Association (CEA) , said each year she’d spend between $800 and $1, 000 on average buying supplemental textbooks and classroom materials, but most CEA members pay about $650.
Emanuel, the teacher in New York City, buys books, posterboard, tape, scissors, staplers, hand sanitizer, tissues and organizational materials, she said. “It really runs the gamut. ”
It’s gotten better in recent years, she said, with organizations like DonorsChoose. org helping teachers supply their classrooms. But she said still spends at least $1, 000 each year.

Besides the teaching work they take home, many educators take on extra work or second jobs to supplement their incomes.
In the 2015-2016 school year, 17. 9% of public school teachers had a job outside of the school system, according to data from the NCES . Another 44. 5% took on extracurricular activities within the school system that netted additional pay.
Dallman said she worked all kinds of jobs to make extra money when she was in the classroom, teaching high school social studies.
“In the past I’ve coached swimming, I’ve coached softball, ” she said. “I have worked for UPS as a truck loader in the summer in 100-degree heat in a semi-truck at midnight. ”
The CEA collects information from its 35, 000 members to see what additional jobs they take to supplement their salaries, and there are many examples of teachers driving for Lyft, working at Walmart or doing landscaping, Dallman said.
Colorado teachers aren’t alone, either. Educators in Oklahoma told CNN about working 2, 3 or even up to 6 jobs to make ends meet.
“I think it’s a real testament to an individual’s commitment to teaching when they could probably go find another job and earn more money, ” Dallman said.
“But, ” she adds, “they stay in the classroom because of their passion for our students. ”
« North Korea announces end to missile testing as Trump cites ‘big progress’ » Top Senate Democrat Endorses Decriminalizing Marijuana at the Federal Level