Pay-TV Companies Are in Crisis Mode

Investors in traditional TV providers are reeling as companies from AT&T Inc. to Viacom Inc. fail to stop the desertion of customers lured away by cheaper entertainment options such as Netflix and Snapchat.

AT&T, whose ownership of the DirecTV satellite service makes it the biggest U.S. pay-television provider, said late Wednesday it will report a third-quarter loss of 390,000 satellite and cable customers, echoing a similar warning weeks earlier from Comcast Corp. The same night, Viacom cautioned that its distribution deal with Charter Communications Inc., the second-biggest cable U.S. company, may lead to a blackout, potentially testing whether millions of viewers are willing to go without MTV and Nickelodeon.

Shares of both companies retreated Thursday, contributing to a broader selloff in the sector. The S&P 500 Media Index, which includes Comcast and ESPN owner Walt Disney Co., slid 2.3 percent to the lowest level since December.

After decades of steadily increasing bills and ever-bigger packages of channels, the pay-TV ecosystem is in full-blown crisis mode. AT&T, Dish Network Inc. and others are offering cheaper, online-only versions of cable to lure customers back, but that means having to accept thinner profit margins.

“Those salad days of fat bundles, automatic carriage renewals and customary affiliate steps ups are long gone,” Citigroup Inc. analyst Jason Bazinet wrote in a note this week. “Today, every media and cable firm is jockeying for self-preservation. And we suspect the next chapter in this new era means Charter will drop — or significantly curtail — distribution of Viacom’s content.” 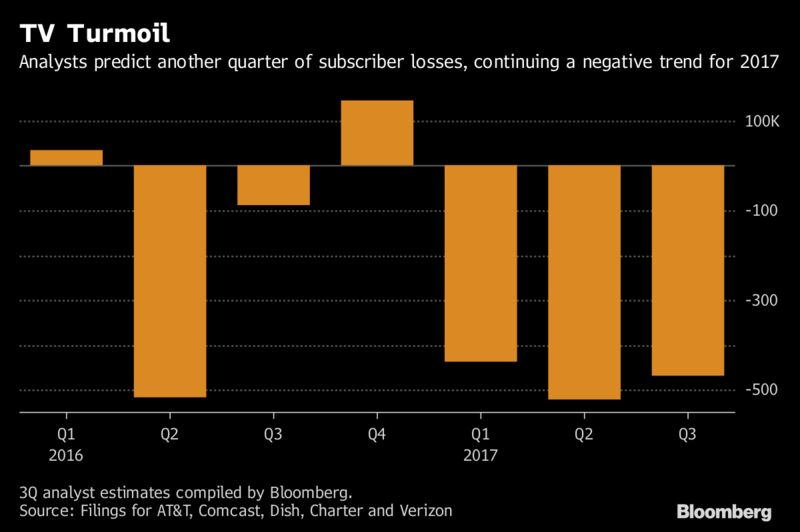 Barring a major fourth-quarter comeback, 2017 is on course to be the worst year for conventional pay-TV subscriber losses in history, surpassing last year’s 1.7 million, according to Bloomberg Intelligence. That figure doesn’t include online services like DirecTV Now. Even including those digital plans, the five biggest TV providers are projected to have lost 469,000 customers in the third quarter.

But with video subscriptions falling, Stephenson is also under pressure to prove he can keep people paying for TV in the first place.

“It is becoming increasingly clear that the wheels are falling off of satellite TV,” said Craig Moffett, an analyst at MoffettNathanson LLC, in a research note.