Qualcomm Inc. filed lawsuits in China seeking to ban the sale and manufacture of iPhones in the country, the chipmaker’s biggest shot at Apple Inc. so far in a sprawling and bitter legal fight.

The San Diego-based company aims to inflict pain on Apple in the world’s largest market for smartphones and cut off production in a country where most iPhones are made. The product provides almost two-thirds of Apple’s revenue. Qualcomm filed the suits in a Beijing intellectual property court claiming patent infringement and seeking injunctive relief, according to Christine Trimble, a company spokeswoman.

“Apple employs technologies invented by Qualcomm without paying for them,” Trimble said. Apple shares initially gave up some gains from earlier on Friday before recovering, while Qualcomm stock maintained small losses.

Read More: Here’s a Detailed Look at What’s Inside an iPhone

Qualcomm’s suits are based on three non-standard essential patents, it said. They cover power management and a touch-screen technology called Force Touch that Apple uses in current iPhones, Qualcomm said. The inventions "are a few examples of the many Qualcomm technologies that Apple uses to improve its devices and increase its profits,” Trimble said.

Apple said the claim has no merit. “In our many years of ongoing negotiations with Qualcomm, these patents have never been discussed,” said Apple spokesman Josh Rosenstock. “Like their other courtroom maneuvers, we believe this latest legal effort will fail.”

Qualcomm made the filings at the Beijing court on Sept. 29. The court has not yet made them public.

“This is another step to get Apple back to the negotiating table,” said Mike Walkley, an analyst at Canaccord Genuity Inc. “It shows how far apart they are.”

There’s little or no precedent for a Chinese court taking such action at the request of a U.S. company, he said. Chinese regulators would also be concerned that a halt of iPhone production would cause layoffs at Apple’s suppliers such as Hon Hai Precision Industry Co., which are major employers.

Conversely, supporting Qualcomm might help Chinese phone companies such as Guangdong Oppo Electronics Co. to gain share against Apple, Walkley said. Investors aren’t concerned about a disruption to iPhone supply because they believe Apple would immediately compromise if there was any threat to production.

“Apple’s not going to miss one day of production,” he said. ‘If for any reason they get a negative judgment, they’d go back to paying Qualcomm in the short term. They’re not going to risk their business model for this.” 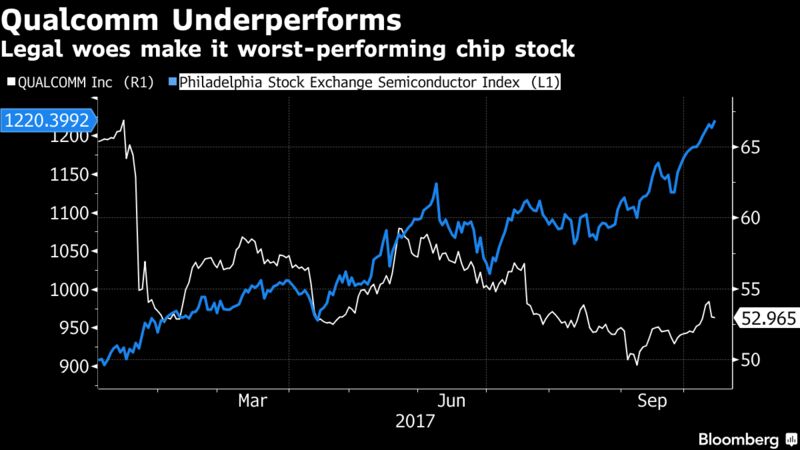 The two companies are months into a legal dispute that centers on Qualcomm’s technology licensing business. While Qualcomm gets the majority of its sales from making phone chips, it pulls in most of its profit from charging fees for patents that cover the fundamentals of all modern phone systems. 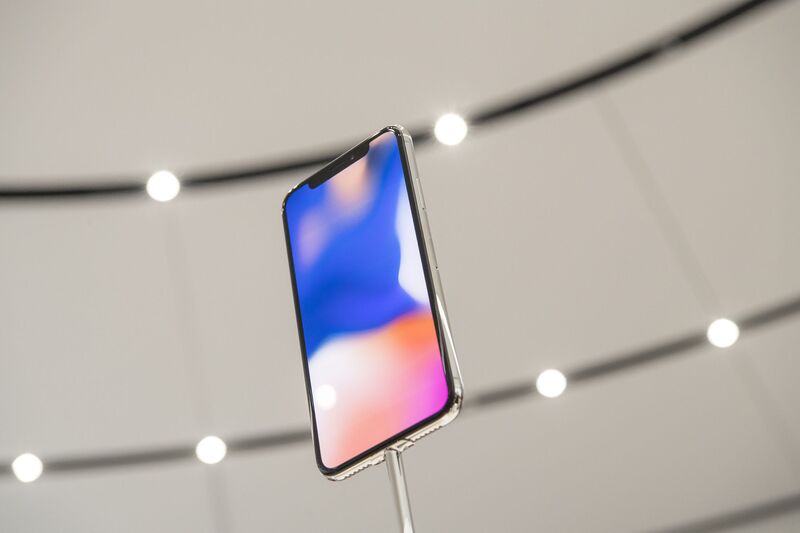 The latest suits come at a crucial time for Apple. It just introduced iPhone 8 and X models aimed at reasserting leadership in a market that’s steeped in competition from fast-growing Chinese makers. Suppliers and assemblers in China are rushing to churn out as many new iPhones as possible ahead of the key holiday season, so any disruptions would likely be costly. The Greater China region accounted for 22.5 percent of Apple’s $215.6 billion sales in its most recent financial year.

Apple uses some of Qualcomm’s modems — chips that connect phones to cellular networks — in some versions of the iPhone. It’s cut that relationship back by using alternatives from Intel Corp. in some markets.

The legal battle started earlier this year when Apple filed an antitrust suit against Qualcomm arguing that the chipmaker’s licensing practices are unfair, and that it abused its position as the biggest supplier of chips in phones. Qualcomm charges a percentage of the price of each handset regardless of whether it includes a chip from the company, and Apple is sick of paying those fees.

Qualcomm has countered with a patent suit and argued that Cupertino, California-based Apple encouraged regulators from South Korea to the U.S. to take action against it based on false testimony. Earlier this week, Qualcomm was fined a record NT$23.4 billion ($773 million) by Taiwan’s Fair Trade Commission, a ruling the company is appealing. Qualcomm is also asking U.S. authorities to ban the import of some versions of the iPhone, arguing they infringe on its patents.

Soon after its first legal salvo, Apple cut off licensing payments to Qualcomm. That’s about $2 billion a year in highly profitable revenue, according to analyst estimates, and the chipmaker was forced to lower earnings forecasts. Qualcomm stock is down 19 percent this year compared with a 35 percent gain by the benchmark Philadelphia Stock Exchange Semiconductor Index. Apple shares are up 36 percent this year.

For more on the iPhone, check out the podcast:

« Trump: Talking to Kim Jong Un a waste, ‘will do what needs to be done’ » Republicans unveil tax plan, call for doubling deduction and cutting rates