Sarah Palin’s oldest son charged with beating up his father 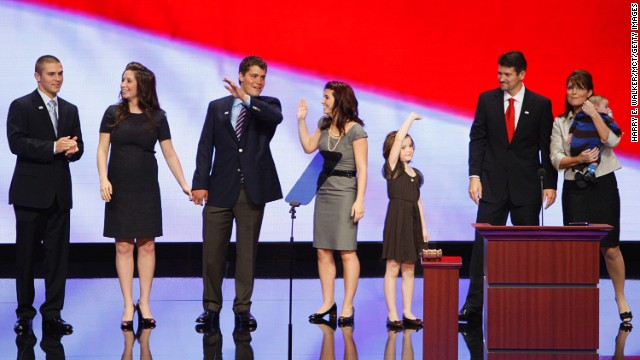 Washington (CNN)Sarah Palin‘s oldest son beat up his father this weekend, according to court records.

The incident happened at the Palin home in Wasilla, Alaska, where Track Palin bloodied his father, Todd, in a dispute over a truck, according to court records.
The 28-year-old was arrested on three charges, including assault, after the incident Saturday. The dispute began when he called to say he wanted to come get the truck, and his father refused, according to court documents.
Track Palin was arrested on charges of first-degree burglary, fourth-degree assault and fourth-degree criminal mischief, and his father suffered injuries to his face and head, the court filing shows.
Track Palin called the officers on the scene “peasants” and told them to abandon their weapons when they attempted to communicate with him, the documents say. At one point, he got onto the garage roof before eventually being detained, the court filing says.
Sarah Palin said her son was “freaking out” and “was on some type of medication,” according to the court documents. Track Palin also told the police he had consumed a few beers earlier, the documents say.
The incident is not his first arrest related to domestic violence. He was arrested in early 2016 and charged with domestic violence assault involving a female, interfering with a report of domestic violence and possession of a weapon while intoxicated.
Sarah Palin attributed her son’s actions in 2016 to his time serving overseas.
“What my own son is going through, what he is going through coming back, I can relate to other families who feel ramifications of PTSD and some of the woundedness that our soldiers do return with,” the former Republican vice presidential candidate and governor of Alaska said at the time. “And it makes me realize, more than ever, it is now or never for the sake of America’s finest that we have that commander in chief who will respect them and honor them.”
« Fox News Host Says Lindsey Vonn Is ‘Un-American’ For Ripping Trump » Sarah Palin’s oldest son, Track, arraigned on domestic violence charges