Saudi Arabia and SoftBank Group Corp. signed a memorandum of understanding to build a $200 billion solar power development that’ s exponentially larger than any other project.

SoftBank founder Masayoshi Son, known for backing ambitious endeavors with flair, unveiled the project Tuesday in New York at a ceremony with Saudi Crown Prince Mohammed Bin Salman. The powerful heir to the throne of the world’ s largest crude exporter is seeking to diversify the economy and wean off a dependence on oil. 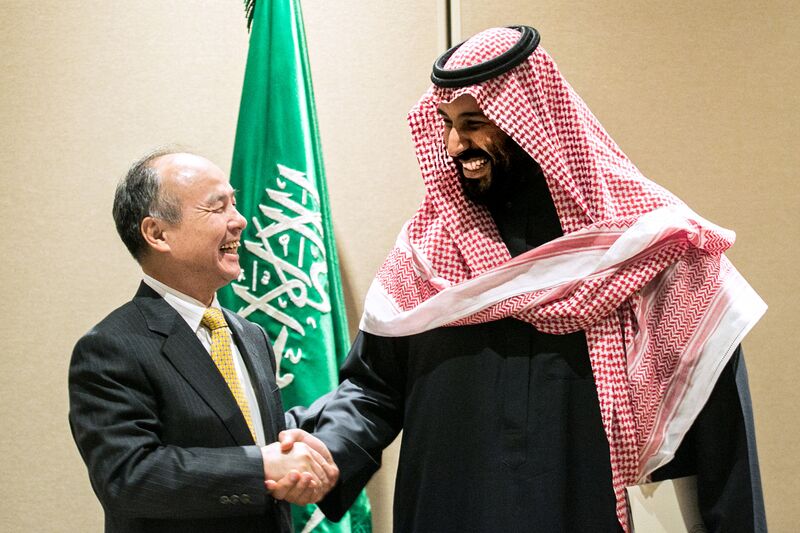 The deal is the latest in a number of eye-popping announcements from Saudi Arabia promising to scale up its access to renewables. While the kingdom has for years sought to get a foothold in clean energy, it’ s was only in 2017 that ministers moved forward with the first projects, collecting bids for a 300-megawatt plant in October.

At 200 gigawatts, the Softbank project planned for the Saudi desert would be about 100 times larger than the next biggest proposed development and more than double what the global photovoltaic industry supplied last year, according to data compiled by Bloomberg New Energy Finance.

“ It’ s a huge step in human history, ” Prince Mohammed said. “ It’ s bold, risky and we hope we succeed doing that. ”

If built, the development would almost triple Saudi Arabia’ s electricity generation capacity, which stood at 77 gigawatts in 2016, according to BNEF data. About two thirds of that is generated by natural gas, with the rest coming from oil. Only small-scale solar projects working there now.

Son said he envisions the project, which runs the gamut from power generation to panel and equipment manufacturing, will create as many as 100, 000 jobs and shave $40 billion off power costs. The development will reach its maximum capacity by 2030 and may cost close to $1 billion a gigawatt, he said.

“ The kingdom has great sunshine, great size of available land and great engineers, great labor, but most importantly, the best and greatest vision, ” Son told reporters at a briefing.

The agreement deepens SoftBank’ s ties with the Saudi Arabia, and advances the crown prince’ s ambition to diversify its economy.

“ SoftBank seeks investment and Saudi needs energy, so it may make sense to sort the financing out in a large block and then separately hammer out the phases and the technical details, ” said Jenny Chase, head of solar analysis at BNEF. “ It is worth noting that many of these memorandums of understanding do not result in anything happening. ”

SoftBank was said to be planning to invest as much as $25 billion in Saudi Arabia over the next three to four years. That’ s a boost for Prince Mohammed, who’ s been at the forefront of the Vision 2030 campaign to diversify the kingdom’ s economy away from oil by that year. SoftBank is said to have aimed to deploy as much as $15 billion in a new city called Neom , which the crown prince plans to build on the Red Sea coast.

The Japanese company’ s Vision Fund is also said to plan investments of as much as $10 billion in state-controlled Saudi Electricity Co. as part of efforts to diversify the utility into renewables and solar energy.

Son, who is known as a savvy investor with a flair for the spotlight , has been promoting clean energy since the 2011 Fukushima nuclear disaster and recently completed a 50-megawatt wind power farm in Mongolia. He has also pushed a plan dubbed “ Asia Super Grid, ” a plan to connect Asian nations by grids and undersea cables to distribute clean energy.

The kingdom’ s deal-making has quickened as it pursues Prince Mohammed’ s diversification goals. Saudi Arabia’ s sovereign wealth fund, the Public Investment Fund, which has more than $224 billion in assets, spent about $54 billion on investments last year. The sale of about a 5 percent stake in oil giant Saudi Arabian Oil Co. is expected to provide more funds.

Saudi Arabia also plans to build at least 16 nuclear reactors over the next 25 years at a cost of more than $80 billion. Electricity demand in the country has risen by as much as 9 percent a year since 2000, according to BNEF.