Spanish police are ready to arrest Catalan President Carles Puigdemont immediately if he declares independence in the regional parliament, according to two people familiar with the government’ s plans.

While a final decision on whether to act has not yet been taken, Spain’ s National Police force has elite officers deployed in Catalonia who are prepared to join a raid if Catalan police try to shield Puigdemont, said one of the people. If Puigdemont makes a statement that falls short of immediate independence, the government in Madrid may stay its hand.

The president is likely to use the words  “ declaration of independence, ” but  they will probably be qualified or hedged in some way, according to another person familiar with his plans. The Catalan government spokesman declined to comment on Puigdemont’ s speech at a press briefing in Barcelona on Tuesday.

Puigdemont is due to address the regional legislature at 6 p. m with many of his supporters looking for him to announce a new republic to follow through on the makeshift referendum held on Oct. 1. With his core supporters demanding he make good on the illegal vote for independence and officials in Madrid urging  Prime Minister Mariano Rajoy to finally crack down on the separatist campaign, Puigdemont’ s rebellion may be running out of road.

Rajoy has insisted all along that he’ ll use only proportionate force in relation to the separatist government in Barcelona. Even so, prosecutors  have been exploring charges of sedition against other separatist leaders including Jordi Sanchez, head of the biggest pro-independence campaign group. Sedition carries a jail term of up to 15 years.

The National Police and the Civil Guard have sufficient officers in place to overcome any resistance they might meet, according to one of the people familiar with the government’ s preparations. Both people asked not to be named discussing confidential plans. 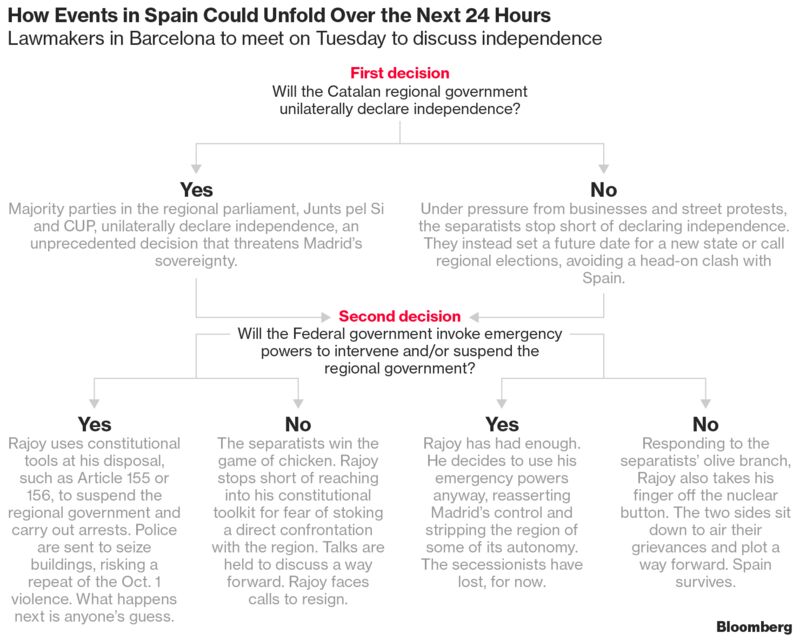 A government press officer declined to comment other than to say that any such decision would have to be ordered by a judge.

The uncertainty hanging over Spain has hit government bonds and stocks. The benchmark IBEX stock index was down 1. 1 percent as of 1: 30 p. m. in Madrid.

Rajoy has vowed to use all the legal means at his disposal to prevent Catalonia seceding after Puigdemont’ s government defied a series of Constitutional Court rulings to go ahead with the referendum.   Catalan police ignored orders to seize ballot boxes ahead of the vote. The Spanish government has stationed thousands of National Police in cruise ships in the Port of Barcelona.

Albert Rivera, leader of the centrist Ciudadanos party that has supported Rajoy’ s stance on Catalonia, said it’ s time to stop using euphemisms. Any declaration of independence by Puigdemont — “ whether it’ s all in cash or paid out over time” — is “ an attack on democracy and you have to respond, ” he said at briefing Tuesday, Efe news wire reported.