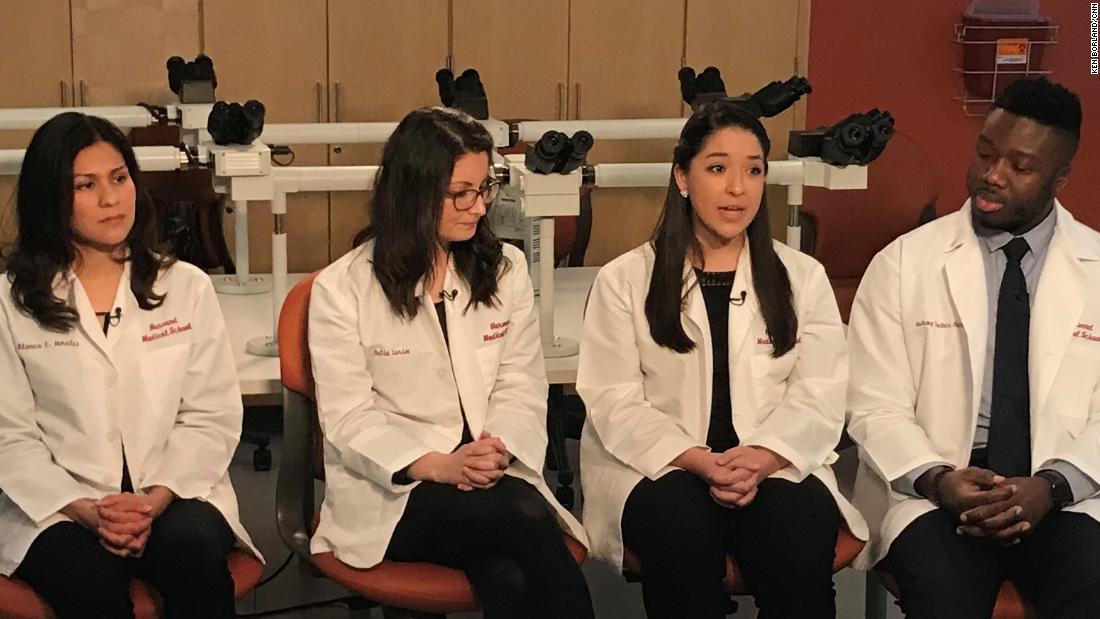 Boston (CNN) As Blanca Morales walks the hallowed halls of Harvard Medical School, she ponders her humble roots and how she might be forced to choose between her parents and her dream of becoming a doctor.

Today, her dream is within reach, but it could mean the ultimate betrayal: She gets to stay in the United States legally and practice medicine, while her parents get deported to Mexico.
“It would be difficult to go on, ” Morales says as she breaks down in tears.
Morales and three fellow Harvard Medical School peers — Dalia Larios, Alma Oñ ate and Anthony Tucker-Bartley — have become the poster children for the Deferred Action for Childhood Arrivals , or DACA, program as the immigration debate grips legislators in Washington .
While there seems to be some consensus that DACA recipients should be allowed to stay and perhaps given a path to citizenship as suggested by President Donald Trump, the students worry what might be taken away from — or worse what might happen to — other undocumented immigrants, including their own families. They fear that immigration horse-trading could see their future in the United States exchanged for a border wall or more stringent deportation policy for others. The survival of DACA — and their dreams — could put a target on the backs of their loved ones.
Before President Barack Obama created the DACA protection, Morales remembers the motto of immigration activism was “undocumented and afraid. ” Undocumented immigrants attended rallies but didn’t tell their individual stories for fear of deportation.
Larios remembers how her family and others shared tips about which streets law enforcement was on to avoid being detained. Oñ ate remembers being 8 years old and hiding in the bathroom with her sister if she thought the police were coming. All four students say they found safety between the pages of books, while their parents worked two or three jobs as landscapers, appliance technicians or caregivers.
“My parents would say, ‘Despite what is going on around you, the thing that you can control is your education, ‘ ” Tucker-Bartley remembers. “It will determine your future. ”

White coat as suit of armor

When DACA was announced in 2012, each of the four was hesitant to register their personal details with a government that could deport them. But, like 800, 000 other people brought into the United States by their parents, they did sign up. The program gave them permission to get drivers’ licenses, enroll in college or take jobs legally. And, says Morales, a new motto of immigration activism was born: “undocumented and unafraid. ”
For Morales, DACA gave her the courage to chase her dream and win a place at the nation’s top medical school, as ranked by US News & World Report . She’d graduated college seven years earlier and done a variety of jobs, including as a Mary Kay beauty consultant to make ends meet. Throughout it all, she says, she had the unwavering support and encouragement of her mother, who developed a respiratory illness that Morales feels is linked to her work in the fields, and her father, who once sacrificed a week’s worth of groceries to buy her a calculator for calculus class.
Life got a little easier under DACA and then again at Harvard Medical School, where university President Drew Faust publicly opposed Trump’s decision last year to end DACA and Harvard Law School scholars offered to help undocumented students.
Morales and her fellow medical students found themselves in white coats that doubled as suits of armor, and with a megaphone to boot.
“That’s why I think it’s important for us, having this privilege of the white coat and the Ivy League schooling behind us, to talk about these issues, ” said Oñ ate, who crossed the border with her family in a desperate attempt to find a doctor who could save her sister’s eyesight.

Out of the shadows, to an ivory tower

The four wrote an open letter published by Boston public radio station WBUR asking to be valued as humans, for the good they have done and will do.
But they fear that their successes and potential could become a bargaining chip, that anything that is given to them could be taken away from others as the immigration debate plays out .
And that could directly affect their families, including Oñ ate’s older sister who did not qualify for DACA, and her parents, no matter what positive impact they are having.
“It puts me against my parents, ” Oñ ate says.
And that seems especially cruel — for each of the four says that without the work ethic and passion instilled in them by their parents, they would never have made it to Harvard or accomplish their dreams of helping others.
Each says he or she would rather not accept a path to US citizenship if the same option was denied their parents.
Morales, who says she still carries the calculator her father bought her in high school, can barely fathom politicians deciding that she could stay, but her parents must go.
“They haven’t met my parents, ” Morales says between deep sobs and pauses. “They haven’t seen all the work that they have put in, every sacrifice they’ve made. ”
So she hopes that any immigration changes that come to her benefit will not be to the detriment of others.
For while she is resolute that she would go back to the Mexico she left as a young girl with her parents, she thinks a different path would be encouraged by those same people whose lifetime of sacrifice and selflessness, she says, guided her out of the shadows and into theivory tower of Harvard.
“We are old, just take it” is what Morales thinks her parents would say. “Follow your dream. ”
« Nikolas Cruz indicted on 17 counts of murder, jail records reveal odd behavior in days after Florida massacre » Florida Moves To Arm Teachers After School Massacre