The New Year’s rally has pushed the S&P 500 Index to its best start since the administration of George W. Bush. Now it’s bumping against speed barriers that marked the upper limits of bull markets for decades.

Up eight times in the first nine days of 2018, the S&P 500 has broken away from a trend line, its 200-day moving average, with a velocity unseen since 2013, the best year for equities in a generation. The benchmark now sits more than 11 percent above the level, putting it in the 92nd percentile of momentum, data going back 20 years show.

Something has changed in equities. If 2017 was a slow but steady slog, 2018 has been off to the races, with shares rising at four times last year’s daily rate on the back of Donald Trump’s tax package and gathering signs of economic strength. Forty seven companies in the S&P 500 are already up at least 10 percent this year, compared with just two down as much.

“Even if you were the bullest of the bulls, this crazy rally start to the year took you off guard,” said Michael Antonelli, an institutional equity sales trader and managing director at Robert W. Baird & Co. “We’ve completely run out of ways to describe what’s happening. We get asked a lot, are you seeing anything different that could explain the rally? The answer is no.” 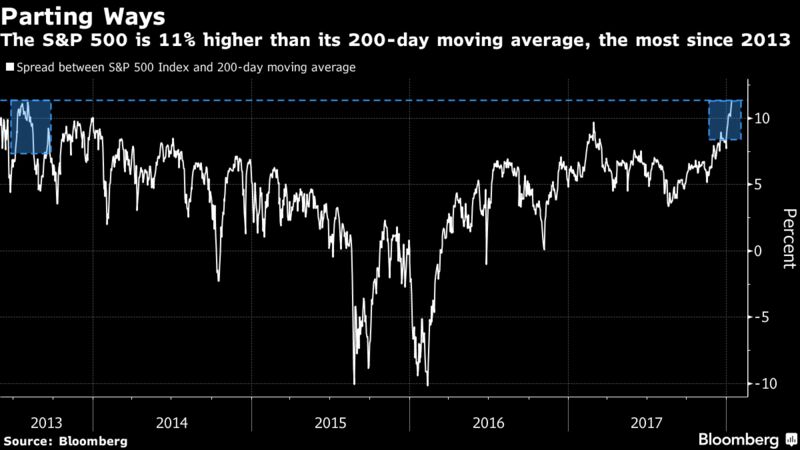 Fear of missing out is rampant not just on Wall Street but worldwide. Globally, stock funds saw a $24 billion inflow in the five days through Thursday, the sixth largest weekly total ever. Concern the U.S. stocks have jumped too much too fast prompted Morgan Stanley’s Andrew Sheets to cut the U.S. stocks’s exposure in favor of European equities this week.

Sheets isn’t the only one having a hard time keeping up. The average of 23 strategists predictions is for the S&P 500 to reach 2,914 at year-end. If stocks were to maintain the same upward trajectory they’ve exhibited in the last nine days, it would take roughly two more weeks to reach the strategists’ target.

The upcoming earnings season may support the valuation. In per-share earnings, the S&P 500 is likely to see growth of 10.2 percent in the fourth quarter of 2017, data compiled by Bloomberg Intelligence show. (The target excludes energy companies, which if added would bump up the gain to 12.5 percent.) Per-share profit in the S&P 500 may rise 15 percent in 2018, the fastest since 2011.

To Walter Todd, Greenwood Capital chief investment officer, the optimism over earnings growth could continue to propel the stocks even higher.

“The fundamentals for the rally are strong, though the higher it goes, the higher the risk of a correction, and the higher the risk that the correction will be steep,” Todd said by phone. “For now, fear of missing out is prompting investors who’ve stayed on the sidelines to jump in, as people say, ‘we missed the rally last year, we’re not going to miss on it again’.”