This Is How You Can Short Bitcoin

Bitcoin’s assault on $10,000 has stirred bears who see fresh evidence of a bubble. There are ways to bet on a crash, but they’re even riskier than trading the cryptocurrency on the way up.

The options to short bitcoin are mostly through unregulated exchanges, and very risky given bitcoin’s volatility. Not to mention it hasn’t exactly been a good year for bitcoin bears given the 10-fold surge in price. But for those daring enough to try, there are ways to bet against bitcoin’s rise. 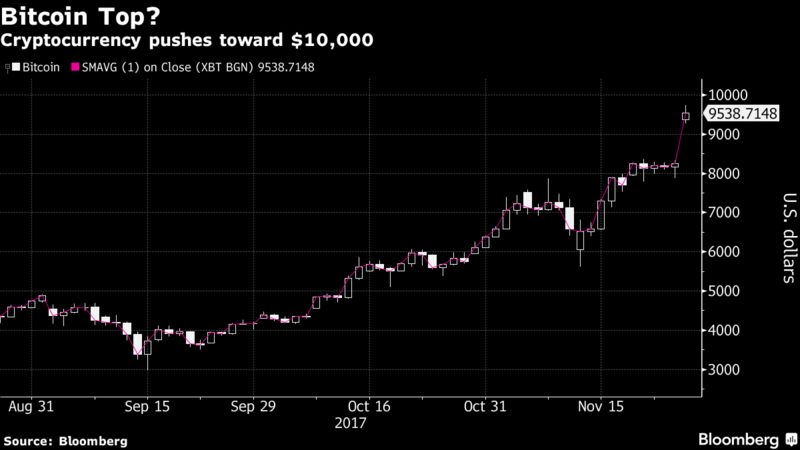 “All the options to short in common markets are becoming available in the bitcoin market,” said Charles Hayter, co-founder of market tracker CryptoCompare. “There’s pretty good liquidity for shorting bitcoin. The main difference with shorting the Nasdaq for example, is it will be a lot more volatile, so there’s a lot more risk. The rate to borrow will also be a bit higher.”

One of the most popular ways to short bitcoin is through CFDs, a derivative that mirrors the movements of the asset. It’s a contract between the client and the broker, where the buyer and seller of the CFD agree to settle any rise or drop in prices in cash on the contract date.

“CFD is currently a great market if you want to short bitcoin, especially ahead of that milestone 10K mark, which we think will bring some retracement,” said Naeem Aslam, a chief market analyst at TF Global Markets in London, which offers the contracts. “The break could push the price well above $10,100 and it would be in that area when we could see some retracement.”

Another common way to short bitcoin is through margin trading, which allows investors to borrow the cryptocurrency from a broker to make the trade. The trade goes both ways; a trader can also increase their long or short position through leverage. Depending on the funds kept as collateral to pay back the debt, this option increases the already risky bitcoin trade. Bitfinex, one of the biggest cryptocurrency exchanges, requires initial equity of 30 percent of the position.

Short-margin trading positions on Bitfinex were at around 19,188 bitcoins on Monday, versus 23,931 long positions, according to bfxdata.com, which tracks data on the bourse.

Most of the brokerages that allow margin trading will also let clients borrow bitcoin to short with no leverage. This will be a less risky way to bet bitcoin price will fall.

The futures market isn’t as widely developed as CFDs and margin trading, but it’s still possible to make bearish bets on bitcoin with options. For now, LedgerX is the only regulated exchange and clearing agent for cryptocurrency options in the U.S. The CME Group Inc. and the Chicago Board Options Exchange have both asked for approval to list bitcoin futures, so that may open up the market to more investors.

Investors can also indirectly bet against bitcoin by shorting exchange traded notes with exposure to the cryptocurrency, like Stockholm-based Bitcoin Tracker One, and Grayscale Investments LLC’s Bitcoin Investment Trust. The risk is that these notes don’t always trade in line with bitcoin, so the exposure won’t be perfect.

Aslam at TF Global Markets said he’s not seeing an increase in demand to short bitcoin.

“Right now as of this minute, the race is still to the upside,” he said.