Trump to LaVar Ball: ‘I should have left them in jail!’

admin / NEWS / politics, President Donald Trump to LaVar Ball: 'I should have left them in jail!' - CNNPolitics / 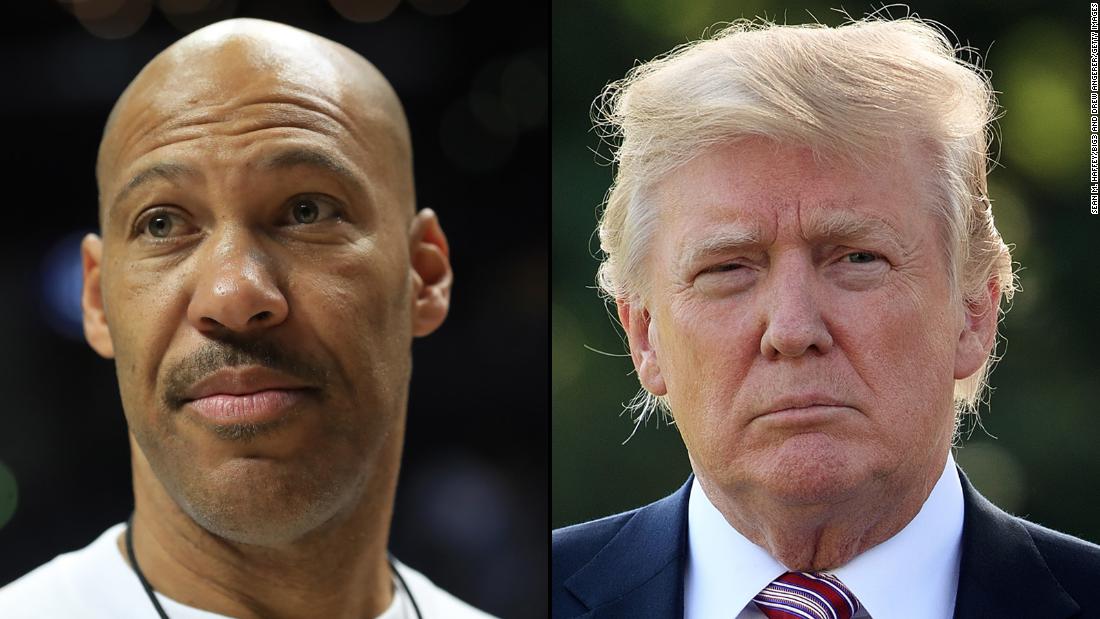 (CNN)President Donald Trump on Sunday shot back at Lavar Ball, the father of one of the UCLA basketball players arrested in China, for belittling the President’s role in the students’ release.

Later Sunday evening, the President tweeted again, saying, “Shoplifting is a very big deal in China, as it should be (5-10 years in jail), but not to father LaVar. Should have gotten his son out during my next trip to China instead. China told them why they were released. Very ungrateful!”
Days after Trump touted his involvement in the release of three students who were arrested in China on suspicion of shoplifting, Ball suggested the President had little to do with the matter.
“Who?” Ball told ESPN when asked about Trump’s role in the situation. “What was he over there for? Don’t tell me nothing. Everybody wants to make it seem like he helped me out.”

How this all began

LiAngelo Ball, along with two other players, Cody Riley and Jalen Hill, were arrested last week on suspicion of stealing sunglasses from a Louis Vuitton store while their team was in the Chinese city of Hangzhou. Trump had said he personally asked Chinese President Xi Jinping to intervene in the case.
On Wednesday, Trump issued a call for gratitude from the players.
“Do you think the three UCLA Basketball Players will say thank you President Trump? They were headed for 10 years in jail!” he tweeted.
The President received the thanks of the players at a news conference later that day, where they also apologized for their behavior. Trump later issued a follow-up message to the students on Thursday, wishing them a “great life.”
“To the three UCLA basketball players I say: You’re welcome, go out and give a big Thank You to President Xi Jinping of China who made your release possible and, HAVE A GREAT LIFE! Be careful, there are many pitfalls on the long and winding road of life!” he wrote on Twitter.

The war of words continued Saturday following Ball’s statement to ESPN when Trump’s social media director, Dan Scavino, fired back at Ball on his personal Twitter account, saying Ball’s son would be in China without the President’s assistance.
“Wannabe @Lakers coach, BIG MOUTH @Lavarbigballer knows if it weren’t for President @realDonaldTrump, his son would be in China for a long, long, long time! #FACT,” Scavino wrote.
LaVar Ball told ESPN he was happy to have his son back, and also seemed to downplay his alleged crime.
“As long as my boy’s back here, I’m fine,” he said. “I’m happy with how things were handled. A lot of people like to say a lot of things that they thought happened over there. Like I told him, ‘They try to make a big deal out of nothing sometimes.’ I’m from L.A. I’ve seen a lot worse things happen than a guy taking some glasses.”
All three players have been suspended from the UCLA basketball team indefinitely.
« Judge Running For Ohio Governor Boasts On Facebook He’s Bedded 50 Women » Trump tweets he ‘took a pass’ at being named TIME’s person of the year