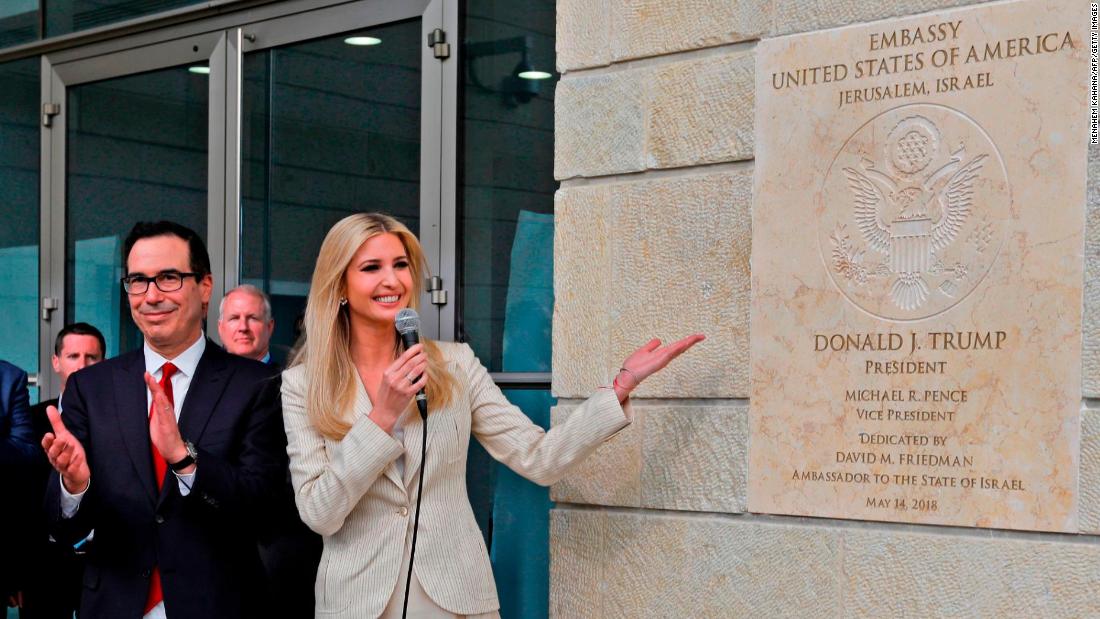 Washington (CNN)The US officially relocated its embassy in Israel from Tel Aviv to Jerusalem on Monday, formally upending decades of American foreign policy in a move that was met with clashes and protests along the Israeli-Gaza border.

The violence could deepen Tuesday, when Palestinians mark what they call the “Nakba,” or Catastrophe, in memory of the more than 700,000 Palestinians who were either driven from or fled their homes during the Arab-Israeli war that accompanied the creation of the state of Israel in 1948.
On Monday, which marked the 70th anniversary of the founding of the state of Israel, US and Israeli leaders hailed the embassy move as a sign of the enduring relationship between the two countries and of US trustworthiness. American officials said it could create an honest foundation for an eventual peace agreement between Israelis and Palestinians.
President Donald Trump did not attend the ceremony in Jerusalem’s Arnona neighborhood, but in a video message broadcast at the event he congratulated Israel, saying the opening had been “a long time coming.” 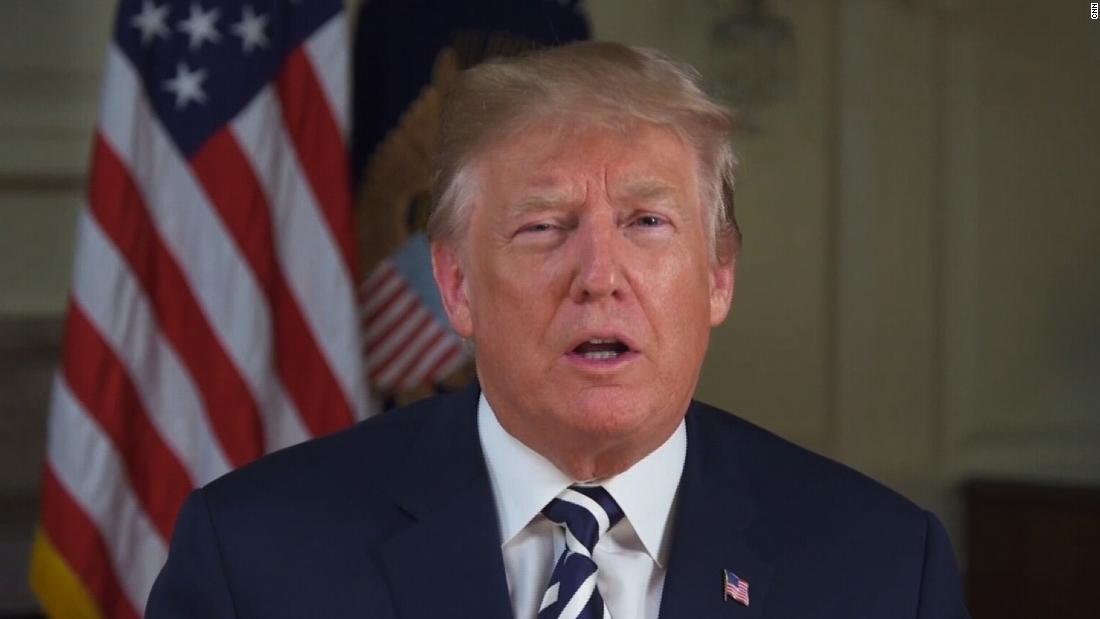 “Today, Jerusalem is the seat of Israel’s government. It is the home of the Israeli legislature and the Israeli supreme court and Israel’s Prime Minister and President. Israel is a sovereign nation with the right, like every other sovereign nation, to determine its own capital, yet for many years we failed to acknowledge the obvious, the plain reality that Israel’s capital is Jerusalem,” Trump said in the prerecorded remarks.
“As I said in December, our greatest hope is for peace,” he added.
But that hopeful vision made for a jarring juxtaposition with the climbing death toll in Gaza, televised images of Palestinians running from gunfire and the decision by the Pentagon and State Department to boost the Marine Corps presence at US embassies across the Middle East and Africa.
The celebratory air at the official opening ceremony in Jerusalem’s Arnona neighborhood also contrasted sharply with calls from international leaders who expressed alarm at the spike in violence and appealed for calm, with some US allies denouncing the US decision to break with international norms by moving the embassy.
France expressed its official disapproval. South Africa pulled its envoy from Tel Aviv, while Turkey pulled its ambassadors from both Washington and Tel Aviv. President Recep Tayyip Erdogan told an audience in London that the US prefers “to become part of the problem rather than the solution” and that it “has lost its role as mediator in the Middle East peace process.”

Riyad Mansour, the Palestinian representative to the United Nations, told reporters there is “no chance” that Palestinians will engage in the US-led peace process, while President Mahmoud Abbas called for three days of mourning.
Saudi Arabia, a close ally of the Trump administration, expressed “strong condemnation” of Israel’s use of force against Palestinian civilians, the official Saudi press agency said. Queen Rania of Jordan, another close US ally, tweeted that it was “a dark and sad day in history, marked with more Palestinian sacrifices.”
“When will the world’s conscience mobilize to give Palestinians the rights so many of us take for granted?” the Queen asked. “May God have mercy on those who lost their lives defending Jerusalem’s proud Arab identity.”
The UN secretary-general, Antonio Guterres, was “profoundly alarmed by the sharp escalation of violence in the occupied Palestinian territory and the high number of Palestinians killed and injured in the Gaza protests,” said his deputy spokesman Farhan Haq.
Guterres added that Israeli security forces “must exercise maximum restraint in the use of live fire” and “Hamas and the leaders of the demonstrations have a responsibility to prevent all violent actions and provocations.” 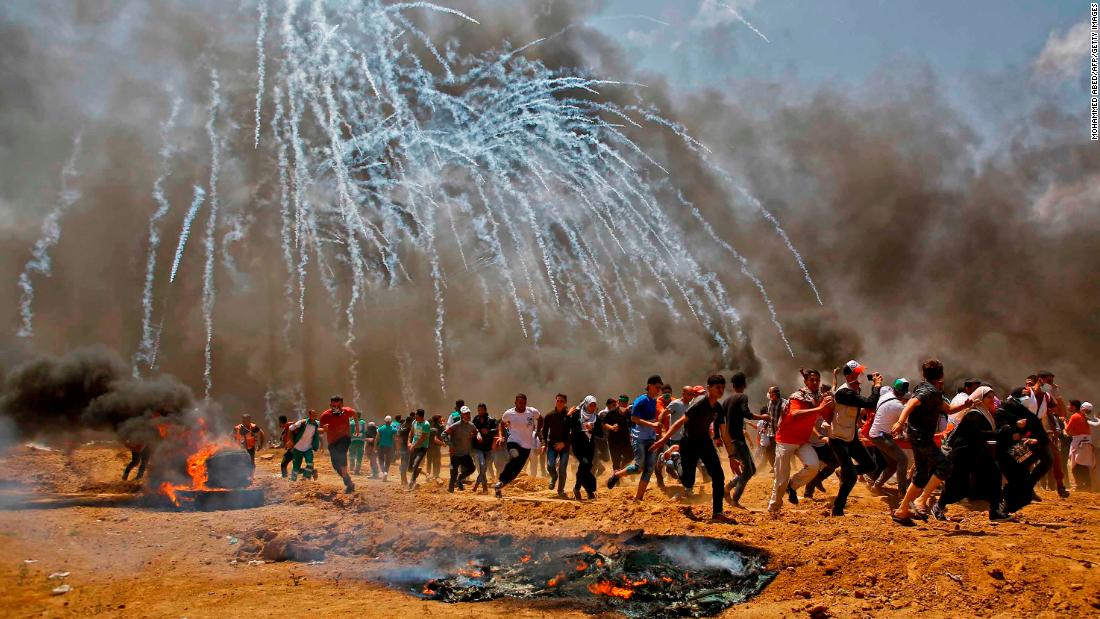 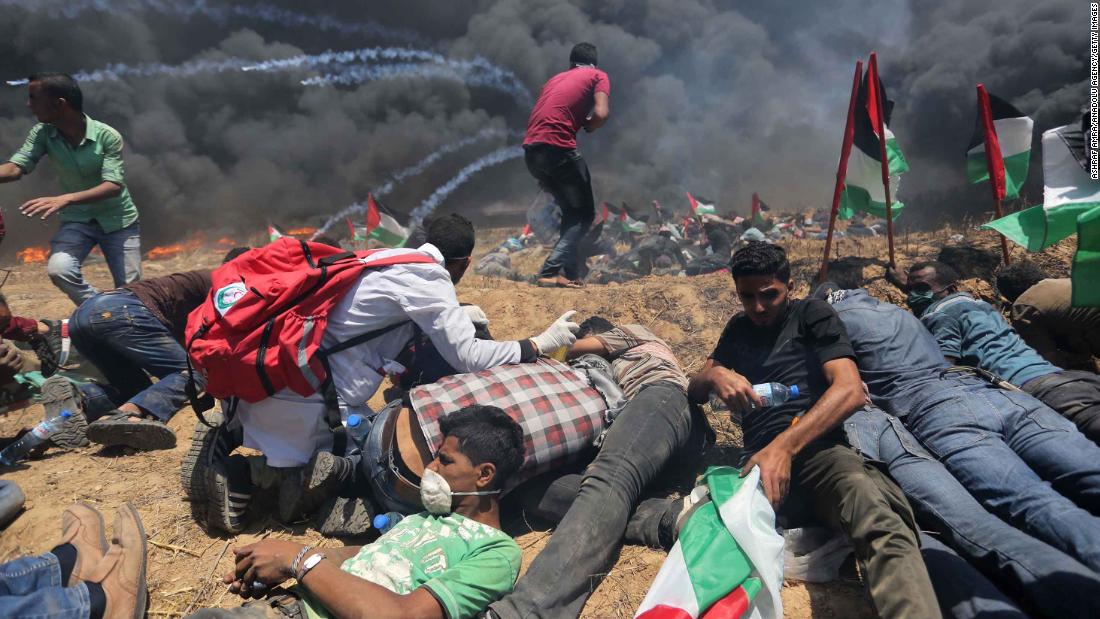 The UK’s Middle East minister, Alistair Burt, said that “we will not waver from our support for Israel’s right to defend its borders. But the large volume of live fire is extremely concerning.” He said, “We continue to implore Israel to show greater restraint.” He also said that “the UK supports the Palestinians’ right to protest, but these protests must be peaceful.”
Those calls diverged from the Trump administration’s insistence that the problem was on the Palestinian side and in particular Hamas’ “cynical” use of the situation.
“The responsibility for these tragic deaths rests squarely with Hamas,” White House deputy press secretary Raj Shah told reporters at the White House. “Hamas is intentionally and cynically provoking this response and as the secretary of state said, Israel has a right to defend itself.”
When asked about the contrast between rock-wielding Palestinians and armed Israel Defense Forces firing on them, Shah said, “This is a propaganda attempt. I think the Israeli government has spent weeks trying to handle this without violence.”
At the State Department, when Secretary of State Mike Pompeo was asked by CNN’s Michelle Kosinksi if he would address the ongoing violence, he simply turned and left the room. 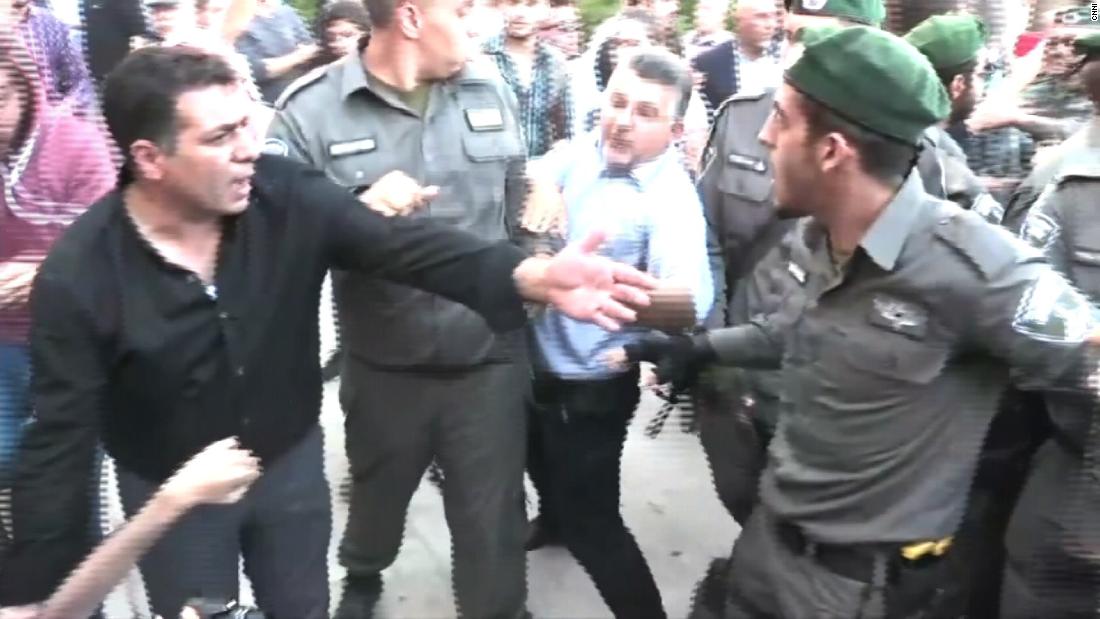 Protesters clash as US Embassy opens

Trump’s decision to declare Jerusalem the capital of Israel and relocate the embassy is contentious for Palestinians, who hope to claim part of the city as their future capital.
The city is also home to deeply holy sites for Jews and Christians. The issue has been so thorny that international negotiators had left the question of Jerusalem to the final stages of any peace deal.
At the ceremony Monday, politicians and dignitaries — including Ivanka Trump and her husband, Jared Kushner, — watched as US Treasury Secretary Steve Mnuchin unveiled the US seal, turning what was formally the consulate building into the embassy.
Kushner, who is also a senior adviser to the US President, called for unity in his address. 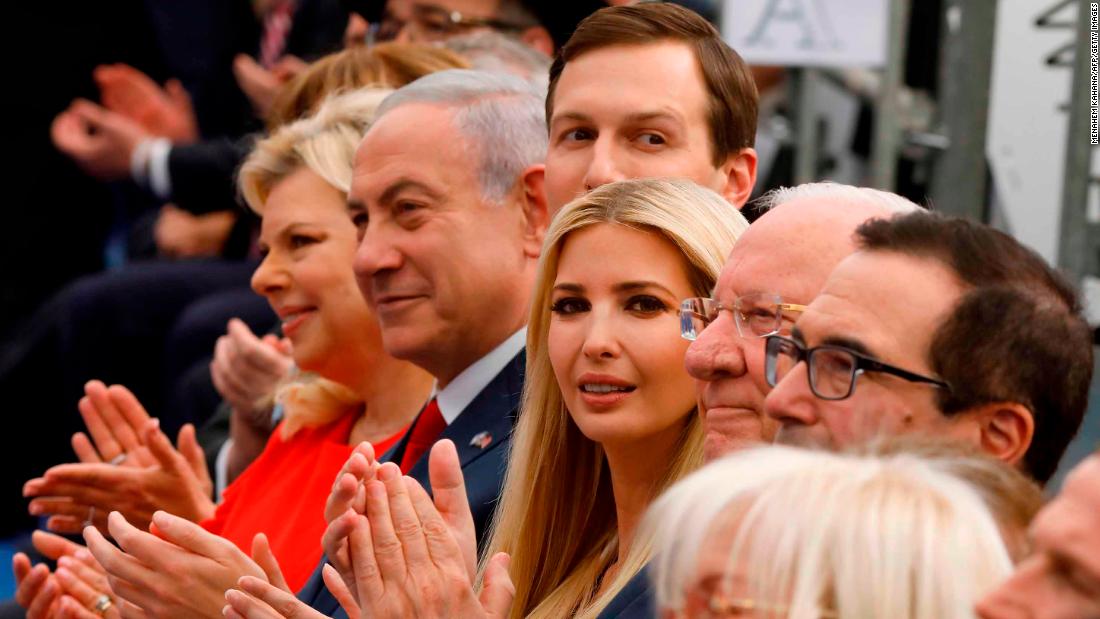 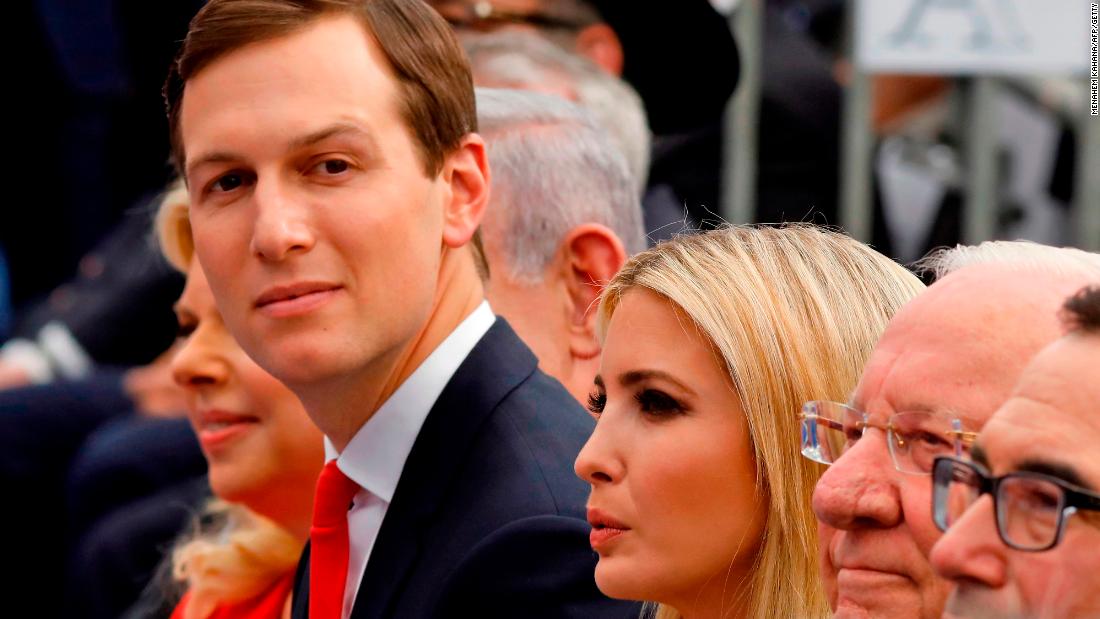 “We believe it is possible for both sides to gain more than they give — so that all people can live in peace — safe from danger, free from fear and able to pursue their dreams,” he said.
“Jerusalem must remain a city that brings people of all faiths together.”

Israeli Prime Minister Benjamin Netanyahu thanked Trump for his support on Twitter hours ahead of the opening ceremony.
“What an amazing day! Thank you, @POTUS Trump,” Netanyahu said while retweeting a Twitter post from Trump.
The opening of the embassy happened a day after Israel celebrated Jerusalem Day, marking what Israelis consider the reunification of the city.
Speaking at the ceremony, Netanyahu hailed the alliance between America and Israel as “stronger than ever.”
“What a glorious day. Remember this moment. This is history,” he said.
“President Trump, by recognizing history, you have made history. All of us are deeply moved; all of us are deeply grateful.”
Outside the embassy, police and protesters clashed as tensions ran high.
Fourteen protesters were arrested for confronting police officers and interrupting public order, Jerusalem police said.
« Ten children rescued from unsafe living conditions in California, parents arrested, cops announce » A soldier lost her ear in a car accident. So the doctors grew her a new one — in her forearm