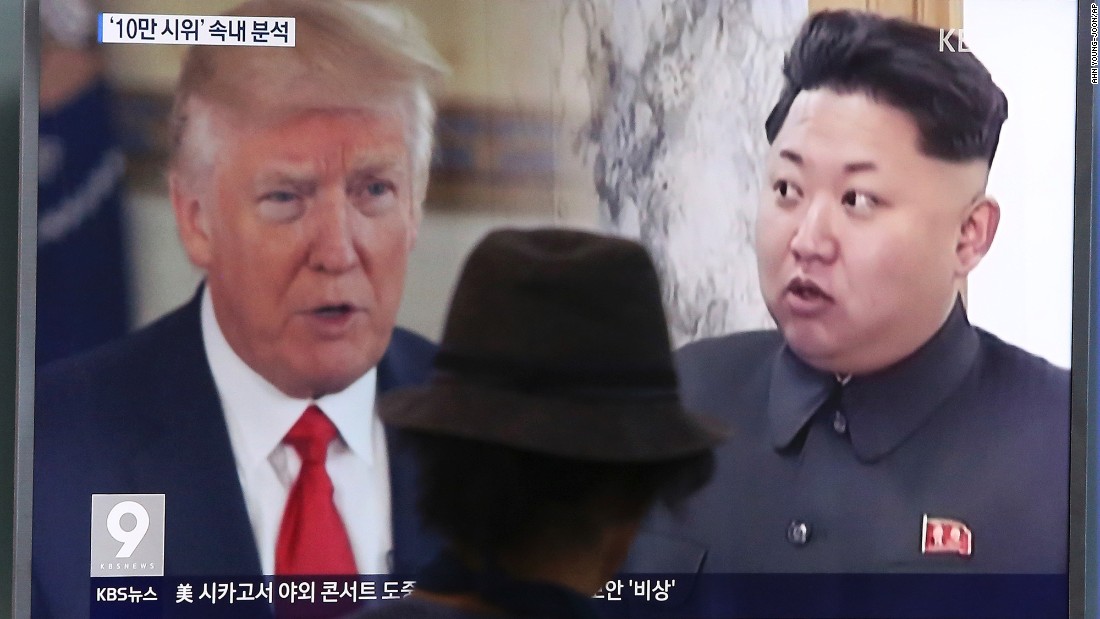 (CNN) It really is worth considering the degree to which public talk — and President Trump’s share to it — have driven all of us to a potentially dangerous level of increased tensions on the Korean peninsula.

Remember exactly how this all started: with a Wa Post story on Tuesday early morning that cited unnamed intelligence resources who divulged a classified evaluation that Pyongyang had reached the opportunity to miniaturize a nuclear warhead.
Mister. Trump was asked later that will day for his take on the content. That’s when we got “fire plus fury” and the nasty little swap of threats and challenges in between Bedminster, New Jersey, where Trump is definitely taking his vacation, and Pyongyang, all of which culminated in this tweet Fri by the commander in chief:
“Military solutions are now completely in place, locked and loaded, need to North Korea act unwisely. Ideally Kim Jong Un will find an additional path! ”
Social and conventional media protection of the tit-for-tat has fueled rumours, engendered discussion about worst-case situations, and at intervals prompted, if not triggered, President Trump to keep upping the ante.
Below is part of the exchange he had yesterday having a reporter outside his clubhouse:
TRUMP: Let’s find what he does with Guam. If he does something within Guam, it will be an event the likes of which usually nobody’s seen before, what will take place in North Korea.
REPORTER: And when you declare, what do you mean?
TRUMP: You’ll see. You’ll see. Plus he’ll see. He will see.
REPORTER: Is the fact that a dare?
TRUMP: It’s not a dare. That is a statement. He’s not going to go around harmful Guam. And he’s not going to endanger the United States. And he’s not going to endanger Japan. And he’s not going to jeopardize South Korea. No, that’s not the dare, as you say. That is a declaration of fact.
You can see and feel in just this particular little give-and-take the frantic, tightening up spiral toward yet another threat.
Don’t get me personally wrong. This is newsworthy stuff. They are fair questions to ask the best choice of the free world. And Trump should be made to comment and explain his position. I do not problem reporters for doing their function, or commentators for providing their own views. Nor do I question the particular Washington Post for publishing the initial story (though I have grave worries over the logic behind the outflow itself. It wasn’t only unlawful; it was reckless).
As an on-air analyst, I have already been party to the discussion. But In my opinion all of us — in and out of federal government — should be mindful that, once we talk about current events, the way we all talk about them can and often will affect them. Words and sculpt matter and can drive more than just the storyplot. They can drive actual events.
Now, near once we can tell, no one’s finger is definitely poised over any little red-colored buttons. No US or coalition forces have been moved. No civilians have been evacuated. Aside from whatever arrangements North Korea is making (or is not) to carry out its danger against Guam by mid-month, most DPRK military action has been documented.
I’ll choose to believe Mr. Trump is usually playing a game of chicken right here, that he is trying to turn up the warmth to a degree that even Betty Jong Un can’t stand, and that Wa is trying to force some sort of discussed outcome. I hope it works.
But it’s a mistake to consider his hyperbole and the frenetic open public chatter don’t have deleterious effects. The particular war of words has already triggered a dip in the stock market. It offers certainly affected the public mood within Seoul, Tokyo, Beijing, and Guam — where residents are now reading through leaflets that tell them, for example , never to look at the airburst of incoming bombs. And it has prompted world leaders through Germany, Japan, South Korea, Brand new Zealand and Australia, just to title a few, to publicly call for relaxed and dialogue.
Indeed, just this morning Russian federation and China floated again the thought of trying to broker some sort of dialogue involving the US and North Korea. Consider that for a moment: Russia plus China playing the big boys to maintain us little scrappers in line.
And consider this: what was different between the time we visited bed Sunday night and woke up Monday morning? Nothing, actually, except the public exposure of some thing most experts — and the President — already knew: that will Pyongyang was racing ahead to create a nuclear-armed ICBM.

There should be a peaceful resolution to any or all this. If it must come by method of Chinese and Russian intervention, therefore be it. But if that happens, we can not grouse anymore about diminishing ALL OF US leadership. We will have had a turn in it.
In case I’m wrong, and this isn’t just the bluff, then amid the damage we will be left to contemplate the way we went from leak to twitter update to war.
« Mexico drug cartel violence hits tourist hotspots of Cancun and Los Cabos » American flag picked up, re-positioned by Good Samaritan