Japanese stocks turned lower as the yen advanced, and shares also declined in South Korea and Australia in wake of reports the Trump administration is preparing new curbs on Chinese investments. China’s shares swung between gains and losses and its currency weakened after its announcement Sunday it would free up more than $100 billion in the banking system to help cushion a slowing economy, a move that had been widely anticipated. Treasury yields declined, in another sign of a risk-off impulse that saw emerging market equities tumble last week. 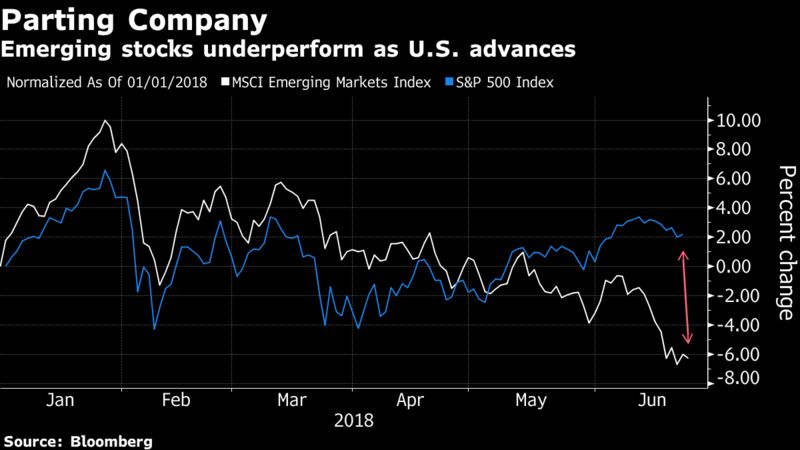 Trade tensions between the world’s two-largest economies that have rattled markets and sent money pouring out of emerging markets this month are set to remain at the forefront of investors’ attention. The move by the People’s Bank of China to trim the required reserve ratio for some banks comes into effect on July 5, one day before the first round of U.S. tariffs on Chinese goods begin.

Before that, the U.S. Treasury is expected to release plans for fresh rules on Chinese investment in technology companies. Under the plan, the White House would use one of the most significant legal measures available to declare China’s investment in U.S. companies involved in technologies such as new-energy vehicles, robotics and aerospace a threat to economic and national security, according to eight people familiar with the plans.

“This one could well result in an escalating trade war,” Lee Ferridge, a macro strategist at State Street Corp., told Bloomberg TV in Hong Kong. “Volatility is going to continue to rise from here.”

In the first of a series of key elections in emerging markets, Erdogan claimed a mandate to govern in Turkey. He had 53 percent of the presidential vote to 31 percent for his closest challenger, with 98 percent of ballots counted, the government news agency Anadolu said.

Elsewhere, China’s currency fell to a five-month low. While the dollar has been climbing against the yuan since mid-April, the advance has been slower than against some G10 currencies — of which the yuan is not a member — suggesting China might have been moderating the currency’s decline.

These are key key events coming up this week: