Bitcoin Fall Extends to 25% as Fears of Crypto Crackdown Linger

January’s cryptocurrency selloff got fresh impetus on Tuesday when Bitcoin slumped as much as 25 percent, as the prospect of regulatory crackdowns appeared to spread.

While the largest digital coin was down 25 percent at $10,338 as of 4:37 p.m. in New York, it was still at the lowest level since early December, according to composite pricing on Bloomberg. As Bitcoin halted its two-day rally, rival cryptocurrencies also tumbled. Ripple sank as much as 40 percent and Ethereum dropped 26 percent. 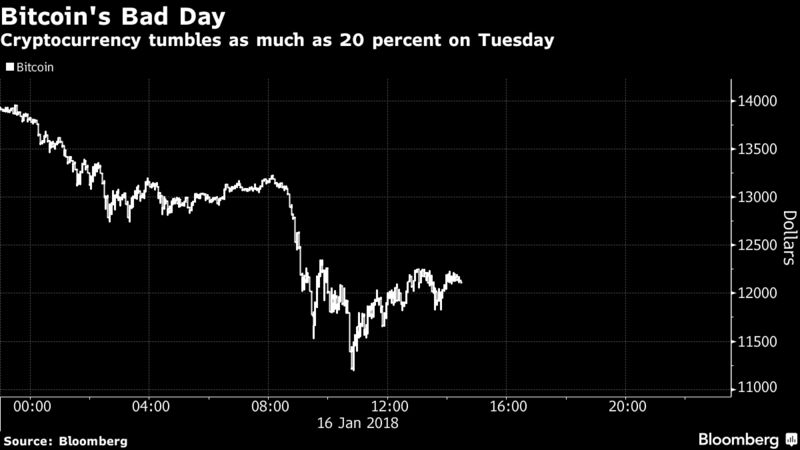 Speculators across the globe are struggling to determine when or how market watchdogs may rein in an industry that’s decentralized and derives much of its value from anonymous ownership. Many assertions that digital coins represent a bubble have triggered double-digit selloffs over the past year, only to be followed by rebounds.

In South Korea, shutting down cryptocurrency exchanges is still an option, Finance Minister Kim Dong-yeon said in an interview with TBS radio. But measures first need “serious” discussion among ministries, Kim added, holding out hope for traders that a crackdown won’t go that far. Kim said there’s irrational speculation and that rational regulation was
needed. 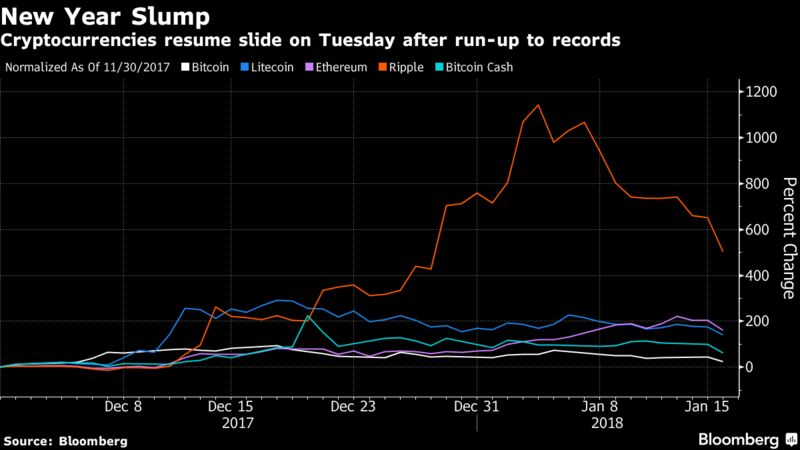 China, which first began targeting the industry last year, is escalating its clampdown on cryptocurrency trading, particularly online platforms and mobile apps that offer exchange-like services, according to people familiar with the matter.

“We’ve heard reports that South Korea, China and Japan have considered a shared approach, a path, to regulation,” ETX’s Wilson said, also citing a challenge to digital coins from a bill in the U.S Senate. “It looks like the light touch that has allowed the crypto-boom to explode may be coming to an end,” he wrote in a note to investors.

Lower-than-normal trading in Korea and Japan may have exaggerated the moves in Asia hours on Tuesday, said Mati Greenspan, senior market analyst for the eToro currency platform.

Bitcoin trading using the Korean won was about 3.3 percent of the total among major currencies, compared with more than 10 percent reached on several days over the past two weeks, according to cryptocompare.com data.

Steven Maijoor, chairman of the European Securities and Markets Authority, said investors “should be prepared to lose all their money” in Bitcoin, in a Bloomberg TV interview in Hong Kong. “It has an extremely volatile value, which undermines its use as a currency,” he said. “It’s also not broadly accepted.”

The ESMA warned retail investors against initial coin offerings in November and is monitoring developments in cryptocurrencies, Maijoor said.

« 10 Minutes Before Her Father Died, Ellen DeGeneres Saw A Beautiful Sign » 9 Things The Happiest Couples Do For Each Other Without Being Asked