For Bitcoin investors, these are the times that try one’ s soul.

After surging to almost $20, 000 in December following the introduction of regulated futures contracts in the U. S., the world’ s largest cryptocurrency has lost more than half its value, plummeting to as low as $7, 614 on Friday. It regained some ground on Saturday, rising 7. 5 percent to $9, 290. 15 as of 2: 58 p. m. in New York, according to coinmarketcap. com .

Particularly hard hit have been those who got swept up in the mania just before what skeptics ranging from Jamie Dimon to Nouriel Roubini have labeled as one of the biggest asset bubbles in history began showing signs of deflating. Selling by “ weak hands, ” as latecomers are sometimes called across the investing world, contrasts with the view of early advocates pledging to HODL — one frenzied trader’ s misspelled entreaty to hold onto the tokens during an earlier rout that’ s become the mantra of Bitcoin purists.

Bitcoin’ s rise in mainstream consciousness was brought on in part by retail investors’ fear of missing out after viewing the approval of futures as an endorsement by the establishment. As more novice investors jumped in, Bitcoin shot above $10, 000, then $15, 000, then as high as $20, 000 on some exchanges, in a span of only a few weeks. 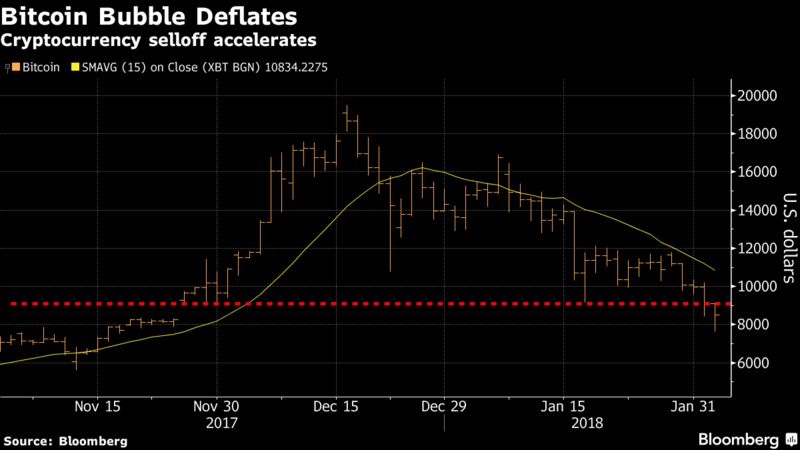 Some of Bitcoin’ s biggest backers even warned the euphoria had gotten out of hand. Billionaire Mike Novogratz, who shelved his plans to open a $500 million cryptocurrency hedge fund and instead wants to build a crypto merchant bank, warned that Bitcoin would fall to as low as $8, 000. Thomas Lee of Fundstrat said the cryptocurrency would slide to as low as $9, 000 before shooting back up.

Recent hacks and tightening regulation have “ weighed on confidence, ” Lee said in a telephone interview Friday. “ Investors are staying on the sidelines until there’ s some visibility, but nothing fundamental has changed. It’ s healthy; you need drawbacks sometimes as nothing goes up in a straight line. ”

Those highs helped increase the scrutiny regulators as the total market capitalization climbed to more than $800 billion at one point in January. A steady steam of headlines since about officials cracking down on the market sparked jitters and caused those same retail traders who got in at the highs, to panic sell, hoping to avoid even greater losses.

But the hordes of people wanting to trade crypto, which repeatedly crashed San Francisco-based exchange Coinbase Inc. when the market was rallying, are still there. More than one million people have signed up for “ early access” to the brokerage app Robinhood Financial’ s cryptocurrency section since it said it would offer no-cost trading in digital coins last week.

Charles Hayter of research website CryptoCompare sees good news on the horizon, as Bitcoin developers are making breakthroughs in technology that will help the network process transactions faster. Also, Hayter said an emerging regulatory framework and investor protections will be positive for cryptocurrencies in the long term.

Meanwhile, many investors who got in earlier aren’ t budging. Bitcoin was worth about $1, 000 at the beginning of last year and about $450 at the start of 2016, so those who bought then are shrugging off these losses — they’ re still up more than 800 percent.

“ It’ s just early-year market blues, ” said  David Mondrus, a long-time crypto enthusiast and chief executive of Trive, a blockchain-based research platform. “ In 12 months, we won’ t even remember it. ”

For more Bitcoin coverage:
Bitcoin Whipsaws Investors as Bubble Shows Signs of Bursting
Roubini Says Bitcoin Is the ‘ Biggest Bubble in Human History’
Long Blockchain Backs Off Bitcoin Mining as Cryptocurrency Falls
Big Investors Circle Telegram Offering as Crypto Insiders Pass
To the World, They’ re Crypto Bros. To Each Other, a Brotherhood