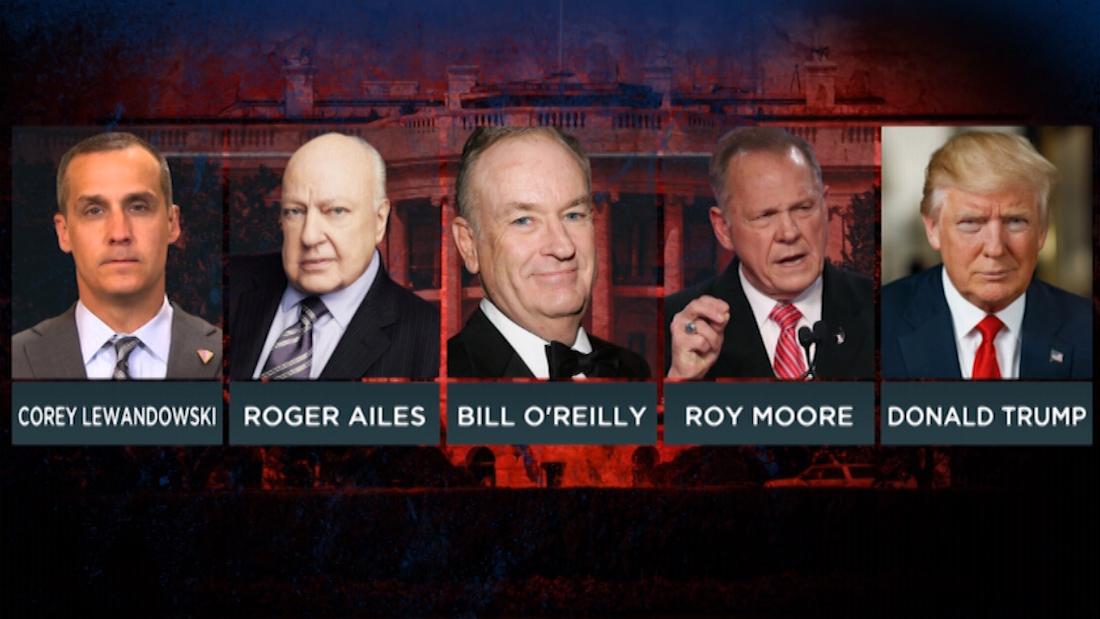 (CNN)If there’s been one consistent thing about Donald Trump since he emerged as a presidential candidate in June 2015, it’s this: When women accuse men of sexual assault or domestic abuse, Trump sides with the men.

“Peoples lives are being shattered and destroyed by a mere allegation,” the President tweeted Saturday morning “Some are true and some are false. Some are old and some are new. There is no recovery for someone falsely accused – life and career are gone. Is there no such thing any longer as Due Process?”
That tweet followed this from Trump on Friday: “[Porter] says he’s innocent and I think you have to remember that. He said very strongly yesterday that he’s innocent but you’ll have to talk to him about that.” Added Trump: “We certainly wish him well. … He did a very good job while he was in the White House.”
You’ll notice what — or more accurately who — is not mentioned in Trump quotes and tweet: The alleged victims.
“The fact that @realDonaldTrump praised Porter and said not a word about his abusive behavior or his former wives is typical of the WH attitude toward women and abuse,” tweeted former New Jersey Republican Gov. Christie Todd Whitman on Saturday.” Our children must learn a different lesson.

Here’s what we know about the alleged victims. Porter’s two ex-wives told the FBI in January 2017 of his abusive behavior. A third woman, who said she had dated Porter in 2016, reached out to the two exes saying she, too, had been abused emotionally and physically by Porter. One of his ex-wives had a restraining order taken out on him. Another went public with a photo of her sporting a black eye that she alleges was the result of being hit by Porter.
But Porter denies all of it.
“These outrageous allegations are simply false,” he said in a statement earlier this week. “I took the photos given to the media nearly 15 years ago and the reality behind them is nowhere close to what is being described. I have been transparent and truthful about these vile claims, but I will not further engage publicly with a coordinated smear campaign.”
Which, despite the panoply of evidence that seems to contradict Porter’s claims, is good enough for Trump.

Just like Roy Moore’s denials were good enough for Trump.
The Alabama Senate nominee was beset by a series of accusations from women that he has sought physical relationships with them as teenagers (Moore was in his 30s at the time). In at least one instance, an accuser said Moore had forced her into unwanted sexual conduct.
Moore denied everything.
“They’re not only untrue, but they have no evidence to support them,” Moore said despite the fact that several of the women told people of their encounters with him as they were happening.
Again, that denial was enough for Trump.
“He totally denies it. He says it didn’t happen,” Trump said of Moore, who he wound up endorsing in the state’s special election runoff. “I do have to say, 40 years is a long time.” (Moore lost the race to Democrat Doug Jones.)

When Fox News anchor Bill O’Reilly faced a series of accusations regarding his conduct toward women last spring, Trump, again, came to the man’s defense. “Personally, I think he shouldn’t have settled,” Trump said of a series of legal settlements agreed to by O’Reilly over the years. “Because you should have taken it all the way; I don’t think Bill did anything wrong.” (O’Reilly was fired by Fox News.)
The prior year — in 2016 — Trump defended then-Fox News boss Roger Ailes. In an interview on “Meet the Press” in July, Trump said:
“I can tell you that some of the women that are complaining, I know how much he’s helped them, and even recently. And when they write books that are fairly recently released, and they say wonderful things about him. And now, all of a sudden, they’re saying these horrible things about him. It’s very sad because he’s a very good person. I’ve always found him to be just a very, very good person. And, by the way, a very, very talented person. Look what he’s done. So I feel very badly.”
All of this, of course, comes back to Trump.

In the course of the 2016 campaign more than a dozen women came forward alleging Trump had sexually assaulted them over his years as a public figure. He flatly denied every single allegation.
“None of this ever took place,” he told The New York Times. “I don’t do it. I don’t do it.”
That’s been the stance of the White House ever since. In December, the White House released a statement amid the re-airing of a number of the allegations against Trump. It read:
“These false claims, totally disputed in most cases by eyewitness accounts, were addressed at length during last year’s campaign, and the American people voiced their judgment by delivering a decisive victory. The timing and absurdity of these false claims speaks volumes and the publicity tour that has begun only further confirms the political motives behind them.”

A change in tone

The one time Trump seems to take the claims of sexual assault or abuse by women at face value is when those charges are leveled against Democrats. When then-Sen. Al Franken of Minnesota and then-Rep. John Conyers of Michigan faced accusations of sexual assault or forcible groping, Trump offered this:
“Women are very special. I think it’s a very special time, a lot of things are coming out and I think that’s good for our society and I think it’s very, very good for women and I’m very happy a lot of these things are coming out. I’m very happy it’s being exposed.”
If you look up “situational ethics” in the dictionary, this is it. When men who he likes or who agree with his political leaning are accused of this sort of behavior, Trump is quick to note their denials — and to slough off the very real evidence many of these women have to back up their claims. When the man is a political opponent, Trump has no problem taking the word of the women.
This is not some private citizen we are talking about. This is the president of the United States. Which means what he says about allegations of sexual assault and domestic abuse matter much, much more. And why what he chooses to say — and not say — is all the more disappointing.
« People Raise Thousands Of Dollars For Man Who Said No To ICE » U.S. Officials Tell World Leaders To Ignore Trump’s Tweets