Erdogan had 53 percent of the presidential vote to 31 percent for his closest challenger, Muharrem Ince of the secular Republican People’s Party or CHP, with more than 99 percent of ballots counted, according to government news agency Anadolu. The country’s electoral board hasn’t published official results yet, but it confirmed that Erdogan won.

“We must leave election tensions behind us,” Erdogan told a jubilant crowd of supporters in Istanbul. Then he flew to Ankara and delivered what’s become a traditional victory speech from a balcony in the capital, saying the country had voted “for growth, for development, for investment.”

Ince, whose party had earlier disputed Anadolu’s figures and claimed vote manipulation, conceded defeat in a text message to the Halk TV channel, though he said the election wasn’t a “fair race.” The president and his allies got the vast majority of airtime on state broadcasters, and the country was officially under emergency rule during the campaign, giving the government extensive powers to suppress dissent.

The results mark “the last step towards Turkey’s transformation into a one-man regime,” Wolfango Piccoli, co-president of Teneo Intelligence in London, a political-risk analysis firm, said in an emailed note.

Erdogan, who has governed since 2003, campaigned on the need for continuity in turbulent times. He’s presided over an economic boom that in recent months has threatened to turn into a bust. The currency plunged and capital fled as Erdogan fought with his own central bank, insisting against economic orthodoxy that interest rates need to be lowered.

The lira gained in early Asian trading as Erdogan’s win removed political uncertainty. It added 1.1 percent to 4.62 per dollar at 3:30 a.m. in Istanbul.

With political roots in a once-banned Islamist movement, Erdogan has chipped away at the secular system and Western orientation bequeathed by Turkey’s founder, Mustafa Kemal Ataturk. At home, he’s ended a ban on Islamic headscarves on campuses and in state offices, and given religious education a more prominent role in schools.

Abroad, he’s increasingly sided with Russia in the Syrian civil war, the fulcrum of a great-power contest for Middle East influence. Erdogan has talked about joining the Eurasian bloc headed by China and Russia. He forged alliances with the Muslim Brotherhood and some Gulf Arab states.

Meanwhile, Turkey’s bid for European Union membership, which gained momentum during Erdogan’s first term, is now in the deep freeze and ties with NATO ally America have rarely been worse. The president slammed the U.S. in his victory speech, accusing it of sheltering the instigators of a failed coup against his government in 2016, and pointing out that a large majority of the expatriate vote in America went to the opposition. 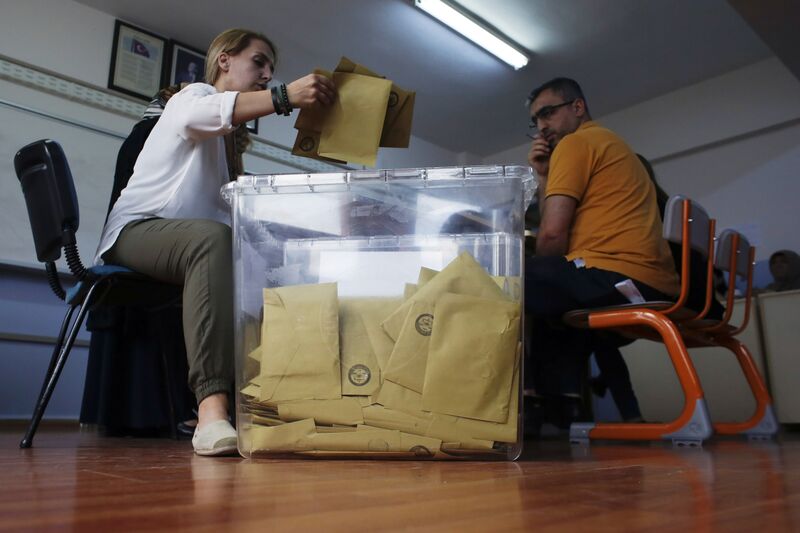 In the parliamentary election, the bloc led by Erdogan’s AK Party had 54 percent, to 34 percent for the main opposition coalition and 12 percent for the leading Kurdish party. That would give Erdogan’s allies control of parliament, though his majority will depend on his nationalist partners. The president appeared to acknowledge that as a drawback in his post-election address, saying that his own party hadn’t “reached its target” in the legislature. “We’ll resolve this,” he said.

In any case, parliament’s powers will be diminished in a revamped political system.

Last year, Erdogan drove through constitutional reforms that eliminate the office of prime minister and hand the president powers to pass laws by decree, pick cabinet ministers from outside the legislature, force new elections and declare a state of emergency.

His rivals accused the president of behaving like a dictator already, saying that his political opponents, journalists, judges and students were at risk of landing in jail in an increasingly arbitrary system. After surviving the 2016 coup attempt, Erdogan embarked on a purge of the civil service, judiciary and education system, sending tens of thousands to prison.

The opposition had promised to undo all the constitutional changes and reinstate Turkey’s century-old traditions of parliamentary democracy. That window appears to have closed, as Erdogan becomes the first Turkish president to exercise the new powers. 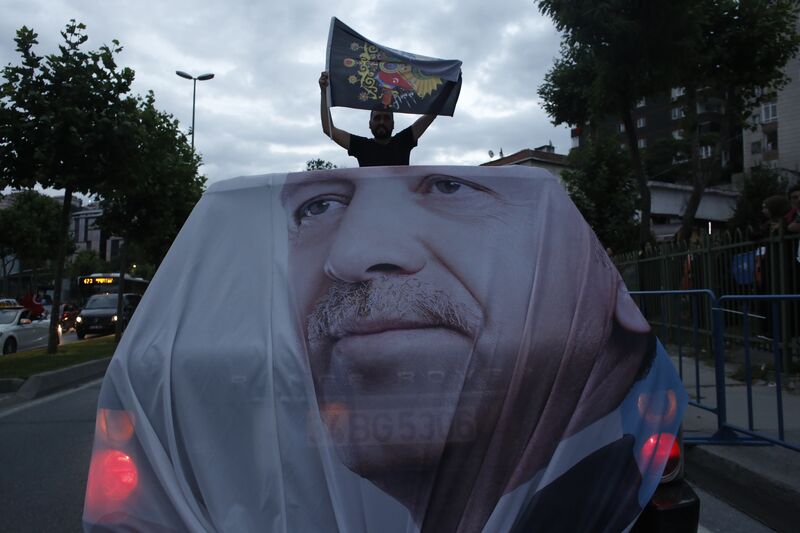 Sunday’s election was brought forward by 18 months amid signs that Turkey’s $880 billion economy was in trouble. The lira’s slide sparked concerns that Turkish companies, which have borrowed heavily in dollars and euros, may struggle to repay debts. The central bank has made domestic credit more expensive too, by raising interest rates 500 basis points since April — a move green-lighted by Erdogan, after initial resistance, as he sought to halt a run on the currency.

But in a snap campaign, Erdogan urged voters to take a longer view and remember the rise in living standards during his 15 years in power. Gross domestic product has expanded at an average pace close to 6 percent a year. Health care provision has been extended to a wider swath of the population, and Turkey has been webbed with new roads, bridges and rail systems.

Those arguments resonated at a polling station in the Seyrantepe district of Istanbul. Opposition supporters, a minority in this working-class and religiously conservative neighborhood, expressed hopes for a political sea-change, and concerns that the election could be rigged.

But Vahap Karayilan, who runs a trucking business, said he was voting for Erdogan and the AK Party because “people forget what it was like before.”

“The water used to get cut off, the garbage wasn’t collected,” the 63-year-old Karayilan said. He recalled taking his elderly father to the hospital in those pre-Erdogan days, and standing in line all night.

“Now we call, we get an appointment, we go, and it’s all sorted out,” he said. “Our hospitals are shiny and new. Things have improved, it can’t be denied. We’d be ungrateful not to vote for the people who did this.”