White House Chief of Staff John Kelly has lost some of his clout following recent missteps and wasn’t at President Donald Trump’s side for crucial decisions on staffing and policy moves, according to several senior aides.

Kelly wasn’t with the president last week when Trump abruptly decided to oust H.R. McMaster as national security adviser and replace him with John Bolton. Just two people were in the room for that decision: Trump and Bolton. 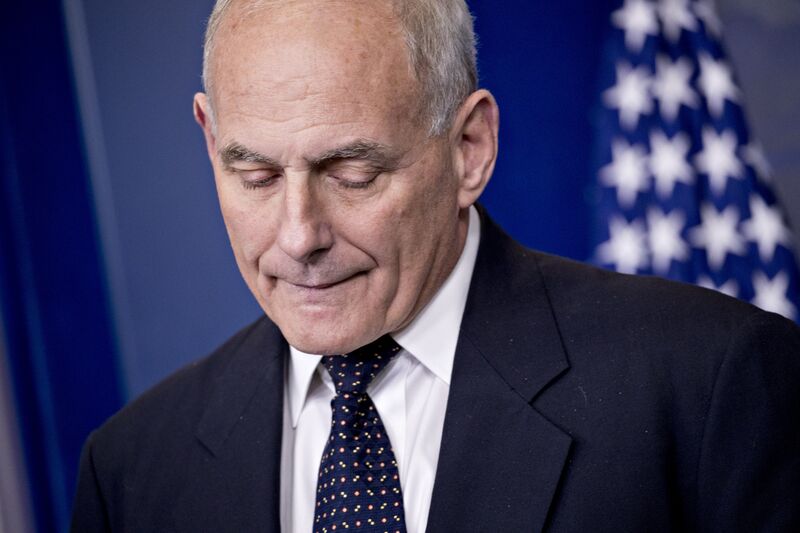 And Kelly is rarely on the line any more when Trump calls foreign leaders. Last week, when Trump spoke with President Vladimir Putin days before the U.S. decided to expel dozens of Russian diplomats, Kelly wasn’t on the call.

The chief of staff’s absence at those two key moments last week highlights his struggles in managing the White House for a president who has a penchant for unpredictability and often follows his own lead when making decisions. Kelly has seen his influence slip since a staffing controversy in February marred his credibility and damaged his image as an internal disciplinarian.

Even so, Trump has shown no recent signs that he wants to fire Kelly and has gone out of his way to publicly praise his chief of staff, including during a visit this month to Marine Corps Air Station Miramar near San Diego where he told the audience Kelly is “doing a great job.”

The chief of staff was in the loop on Trump’s decision to replace Veterans Affairs Secretary David Shulkin with Rear Admiral Ronny Jackson, the president’s physician, an aide said. Trump and Kelly discussed the move several times, including in the Oval Office on Monday, and Kelly delivered the news to Shulkin in a phone call Wednesday afternoon, the aide said.

The picture of Kelly’s role emerges from interviews with seven White House aides and five former staffers and outside confidants. All requested anonymity to discuss internal matters. The White House communications staff declined to comment for this story.

A retired four-star Marine Corps general who served as Trump’s first Homeland Security secretary, Kelly entered the White House last July with a level of authority aides say his predecessor Reince Priebus never possessed. He moved quickly to impose order — most notably by restricting access to the Oval Office for subordinates as well as the president’s many friends, unofficial advisers and confidants.

Those efforts paid off on the policy side, most noticeably with the administration’s victory in getting Trump’s massive tax cut legislation passed by Congress and signed into law before the end of last year.

Yet since early this year, the White House has been gripped by turmoil. In February, Staff Secretary Rob Porter was fired after allegations of domestic violence surfaced, an episode that put the White House process for issuing security clearances under public scrutiny.

Aides say Kelly mishandled Porter’s departure, first by revising a statement that praised the aide after news reports surfaced that he’d been accused of domestic violence, and then by giving reporters an inaccurate timeline of the events leading up to Porter’s dismissal.

Lately, Kelly is less aware of what’s on Trump’s mind and what he’s planning to do next, according to several aides, with one describing the men as sometimes on different wavelengths. Trump doesn’t seek his input on staffing or policy decisions as much as he used to, and Kelly is no longer as successful in blocking access to former aides Kelly has described as disruptive.

The president once again speaks occasionally by telephone with Anthony Scaramucci, the communications director Kelly fired last summer and blacklisted from the White House grounds.

Fired campaign manager Corey Lewandowski is also a presence in Trump’s inner circle. Trump dined with Lewandowski and four others Monday night in the residence. Kelly, who has previously said he wouldn’t allow Lewandowski on the grounds unless he personally escorted him, wasn’t there. But he was aware of the dinner and briefed on the discussion on 2018 politics, aides said.

Still, Kelly has broad authority and is trying to rein in mass upheaval within the staff ranks.

He is overhauling the internal policy process, aides said. At the senior staff meeting on Wednesday morning, Kelly’s newly-named deputy chief of staff for policy coordination, Chris Liddell, announced the plan, which includes new short-term and long-term structures for handling policy and reacting to news of the day, aides said.

Kelly has told the staff that whenever possible, new White House hires need to already possess the necessary national security clearance to do the job. That directive is being carried out. For example, when George David Banks had to leave his National Economic Council post after he did not get clearance because of past marijuana use, the White House brought in Wells Griffith, an Energy Department official who already has a high security clearance.

But aides say they’ve seen signs Kelly’s grip has slipped. Trump’s impromptu March 1 announcement of tariffs on imported steel and aluminum had aides wondering whether the president consults with Kelly before all major decisions since the chief of staff appeared not to have advance warning.

In mid-March, Kelly promised subordinates that there would be no imminent personnel changes in the White House. A week later, Trump replaced McMaster.

Some members of the staff said they no longer take Kelly at his word as they once did. However, some aides argued Kelly’s assurances that day were true in the moment — but it later became untenable for McMaster to stay on amid the whirlwind of media speculation that undercut his credibility dealing with foreign counterparts.

Trump has told confidants that the White House is the opposite of “chaos” portrayed in the media — it’s in danger of stagnation. He views replacing McMaster, Secretary of State Rex Tillerson and Shulkin as the best way to speed up progress on his agenda. Trump has brooded this week about inaction in Congress, arguing that the White House has too many guardrails and rules impeding his goals, an aide said.

Many White House aides retain confidence in the Kelly, according to senior officials. Although he has lost some credibility with the staff, there is no sense of urgency to see him replaced, in contrast to the eventual impatience among some aides for Priebus to go.

Kelly still has some leverage with Trump, but after more than a year in office the president has grown increasingly confident in the role and making more decisions unilaterally, they said.

There are no indications Trump is seriously considering a third chief of staff, though he has mused about replacements with friends.

But he is known for snap decisions. In February, he chastised Kelly on Twitter after the chief of staff said in a television interview that the president had “evolved in the way he looks at things.” The interview followed a meeting with Congressional Democrats in which he reportedly said Trump was “uninformed” during the 2016 campaign when he promised a wall spanning the length of the Mexican border.

Trump tweeted that his plans for the wall had “never changed or evolved from the first day I conceived of it.” Both McMaster’s and Tillerson’s departures were preceded by similar Twitter rebukes.

Kelly has told senior staff that although he doesn’t always agree with what the president wants to do, and Trump doesn’t always take Kelly’s advice, he expects to stay on the job.