The worker, who had been denied a promotion, did “ quite extensive and damaging sabotage” to Tesla’ s operations, Musk wrote in the memo late Sunday, which was reported in full by CNBC. While a spokesman declined to comment, an employee who asked not to be identified confirmed he received the email.

Tesla is conducting an in-depth investigation into the matter, including whether the employee was acting alone, with others at the company or with any outside organizations, Musk wrote.

“ As you know, there are a long list of organizations that want Tesla to die, ” Musk said. He referenced Wall Street short sellers “ who have already lost billions of dollars, ” oil and gas companies that “ don’ t love” to see solar power and electric cars advancing, and automakers that produce gasoline and diesel vehicles. “ If they’ re willing to cheat so much about emissions, maybe they’ re willing to cheat in other ways? ” he said.

Musk’ s email about sabotage comes as Tesla races to ramp up production of its mission critical Model 3 sedan to 5, 000 cars a week. Last week, Musk announced that he was reorganizing the company and reducing Tesla’ s workforce by 9 percent in a bid for profitability. More than 3, 000 workers lost their jobs, and Tesla’ s WARN notice filed with the state of California revealed that over 500 employees in Fremont and Palo Alto were dismissed.

A day later, Musk invoked a late tech titan in urging workers to keep an eye out for any funny business after a fire briefly halted car output. In a “ strange incident that was hard to explain, ” Musk wrote that a small fire on a manufacturing line had stopped production for several hours.

“ Could just be a random event, but as Andy Grove said, ‘ Only the paranoid survive, ’ ” Musk wrote Monday, referring to the late chairman and CEO of Intel Corp. “ Please be on the alert for anything that’ s not in the best interests of our company. ”

Tesla can ill afford manufacturing setbacks now. It’ s racing to meet a target to build 5, 000 Model 3 sedans a week by the end of this month, a goal Musk told shareholders on June 5 that the company was “ quite likely” to achieve. The company’ s forecasts for generating profit and cash in the third and fourth quarters of this year are based on this objective, and falling short would reignite concerns about whether the company may need to raise more capital.

A Tesla spokeswoman confirmed the authenticity of the Monday email, which CNBC reported first. Smoldering in an air filter in the welding area of Tesla’ s body line was extinguished in a matter of seconds, she said. Production has resumed and there were no injuries or significant equipment damage, she added.

Tesla shares climbed for a seventh straight day, adding 3. 5 percent to $370. 83 on Monday. More than $19 billion has been added to the automaker’ s market capitalization in the past month, in part due to Musk’ s confidence at the annual shareholders’ meeting that the Model 3 would meet production targets. In a tweet Sunday, Musk warned that those betting against the company " have about three weeks before their short position explodes. " 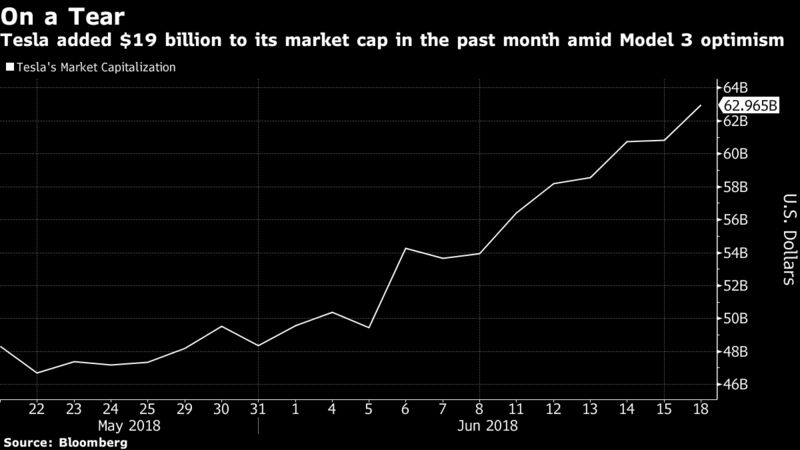 Tesla is no stranger to concerns about sabotage. A former oil services executive named Todd Katz was sued by Tesla in 2016 impersonating Musk in an email to former Tesla CFO Jason Wheeler. In the lawsuit, Tesla said the email was part of an oil-industry effort to undermine the company’ s push for energy-efficient transportation alternatives.

( Updates with context in paragraphs five, 10 and 11. )
« People Are Rattled By How Much This Nigerian Man Looks Like Chadwick Boseman » Pit bull hailed hero after saving family from house fire: ‘I owe her everything’