After climbing to records this year, equities in Vietnam, the Philippines and Indonesia are now looking less like the bets that made them global winners.

The MSCI Asean Index has dropped 0. 5 percent this month and is poised for the third monthly decline and its longest losing streak since an 8. 4 percent, four-month rout that ended in November 2016. Investors who bought Southeast Asian stocks seeking shelter from U. S. -China trade war tensions now face domestic issues that have dragged regional markets amid a surge in U. S. Treasury yields.

The declines are “ driven by capital markets and fund flows, ” said Alan Richardson, portfolio manager at Samsung Asset Management, whose fund has outperformed 94 percent of its peers on a five-year return basis. “ It won’ t affect growth fundamentals. Volatility is your friend if you know how to use it. ”

Richardson said Vietnamese stocks have “ peaked. ” The VN Index climbed to a record on April 9, and it’ s declined 13 percent since then. 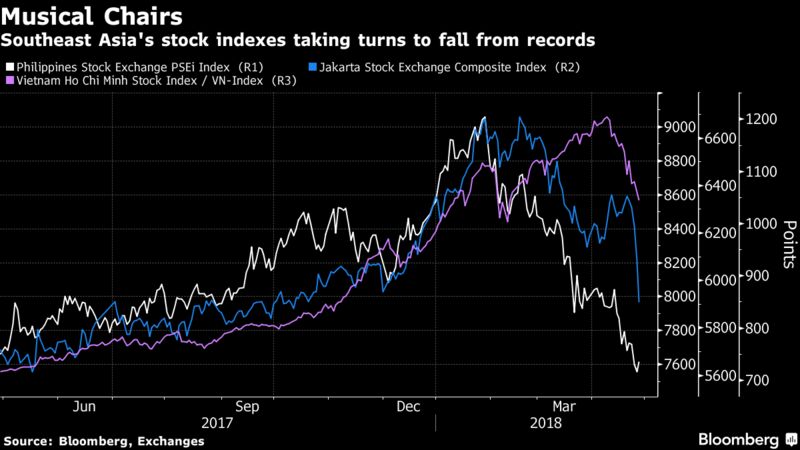 Indonesia and Thailand suffered the biggest foreign outflows in Southeast Asia from its stock markets this year over mounting domestic political and economic concerns.

Prior to that, equities in the region had rallied from a 2016 low, pushing valuations to the highest since at least 2009 in January before concerns over inflation and interest rate hikes sparked a global selloff in February. The region’ s stocks are still more expensive than other Asian peers currently.

Even so, there’ s still value in the region, according to Jonathan Garner, Morgan Stanley’ s chief Asia and emerging market strategist in Hong Kong, who is overweight on Thailand and Singapore.

Both countries have “ relatively good current account positions, quite high dividend yield on markets and reasonable valuations, ” he said.

Corporate earnings are projected to grow at a larger pace in Southeast Asia, compared to peers in the rest of Asia. The region’ s benchmark gauge trades at 15 times 12-month future earnings, compared to 13. 2 times for the MSCI Asia Pacific Index.

Singapore’ s Straits Times Index has also shown resilience, with the benchmark set to post its biggest monthly gain in six months. Leading gains have been banks, which are seen as key beneficiaries of rising U. S. interest rates and solid economic growth at home.