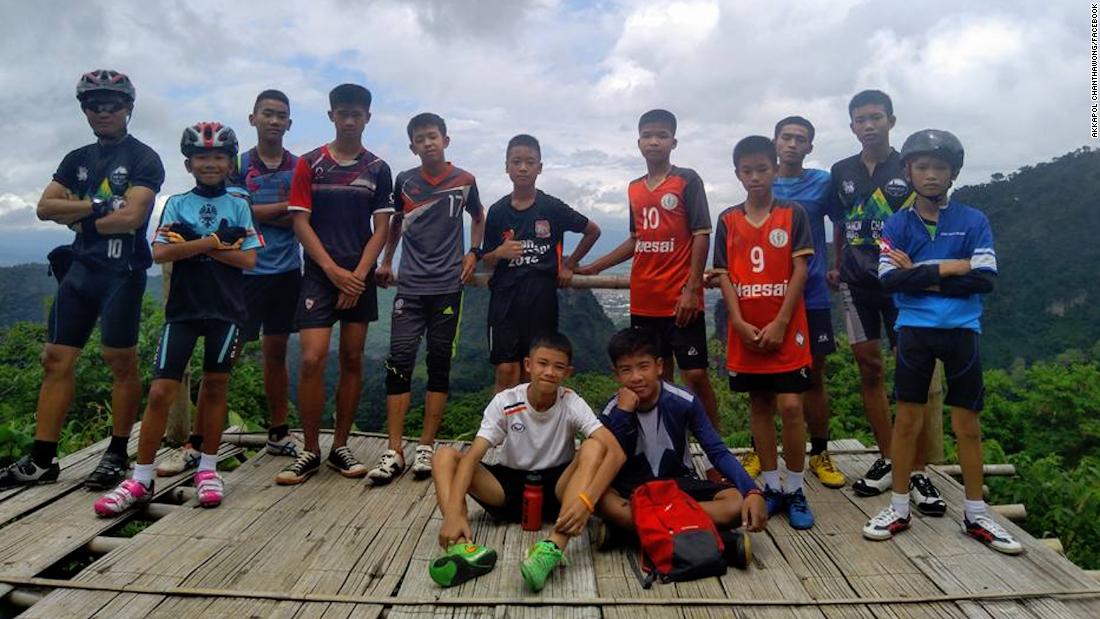 Chiang Rai, Thailand (CNN)Thais reacted with relief and jubilation after rescue teams reported that they’d found all 12 boys and their soccer coach alive in a cave in Thailand nine days after the group went missing.

The Thai Navy released a video on Facebook apparently showing the moment the group were found. In the almost 5-minute clip, the boys are illuminated by torchlight while a diver can be heard speaking to them.
In the tape of the encounter, one of the British rescuers asks, in English, how many were in the group. Thirteen, the boys report. “Thirteen, brilliant!” the diver replies — the number accounts for the entire missing party.
“We are coming, many people are coming. Many people, we are the first.” The dazed boys, unaware of how long they’ve been trapped deep underground, ask what day it is.
“It’s Monday, you have been here 10 days, 10 days,” the rescuer replies. “You are very strong, very strong. We come, ok, we come.”
The boys repeatedly tell them, in Thai, that they’re hungry and need food. The rescuer replies that a Thai Navy SEAL team will come, along with “food and doctors and everything.”
The boys, who are between 11 and 16 years old, are all members of the Wild Boar soccer team. They entered the Tham Luang Nang Non cave system on Saturday, June 23 but became stranded in the dark tunnels by a sudden and continuous downpour.
International rescue teams — which include the Thai Navy SEALs as well as experts from the US, China, Australia and the UK — had been working to reach a large, deep chamber, informally known as Pattaya Beach, where the missing boys were believed to have taken refuge. 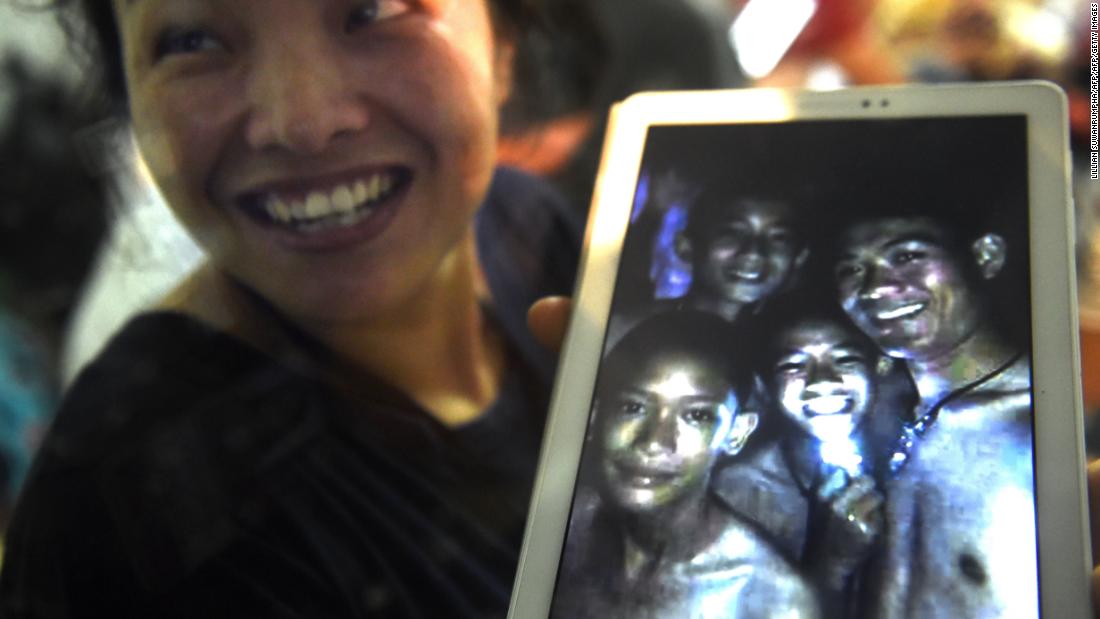 “I confirm they are all safe,” Narongsak Osottanakorn, governor of the local region Chiang Rai, told reporters on Monday night.
Family members greeted the news with relief and tears of happiness, punching the air when they heard that their boys were alive. 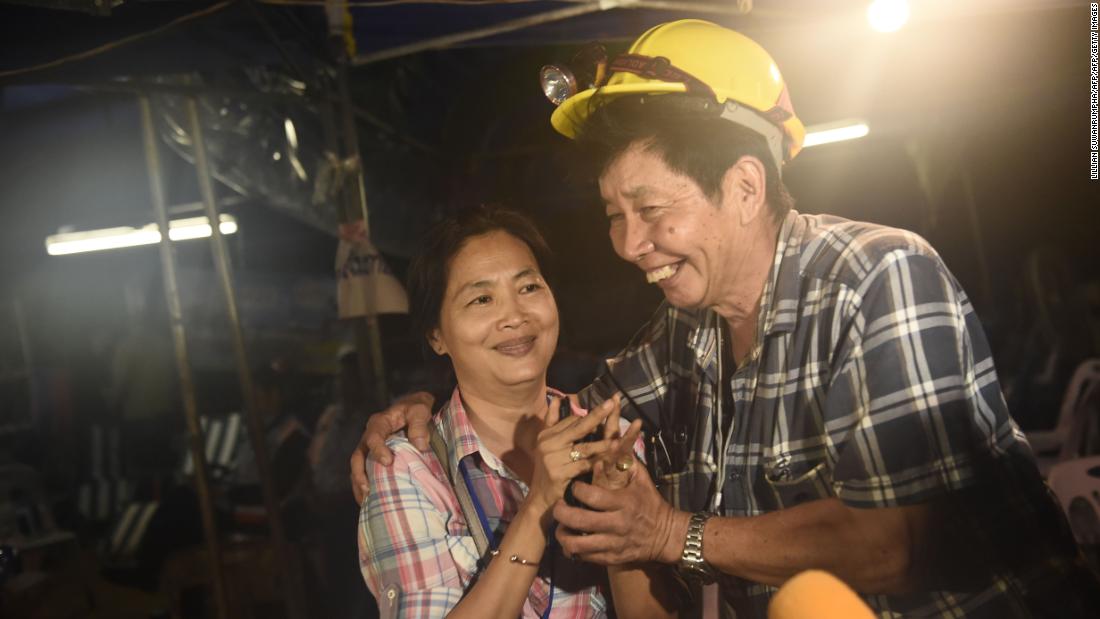 “I was happy to hear the cheering from the rescue workers. I felt that I have hope that I am going to get to see my son alive,” said Adisak Wongsukjan, whose 14-year-old son Ekarat is one of the boys seen huddling in the cave.
“I want to hug my son… usually our family sleep in the same bed together. We are a very close family.” 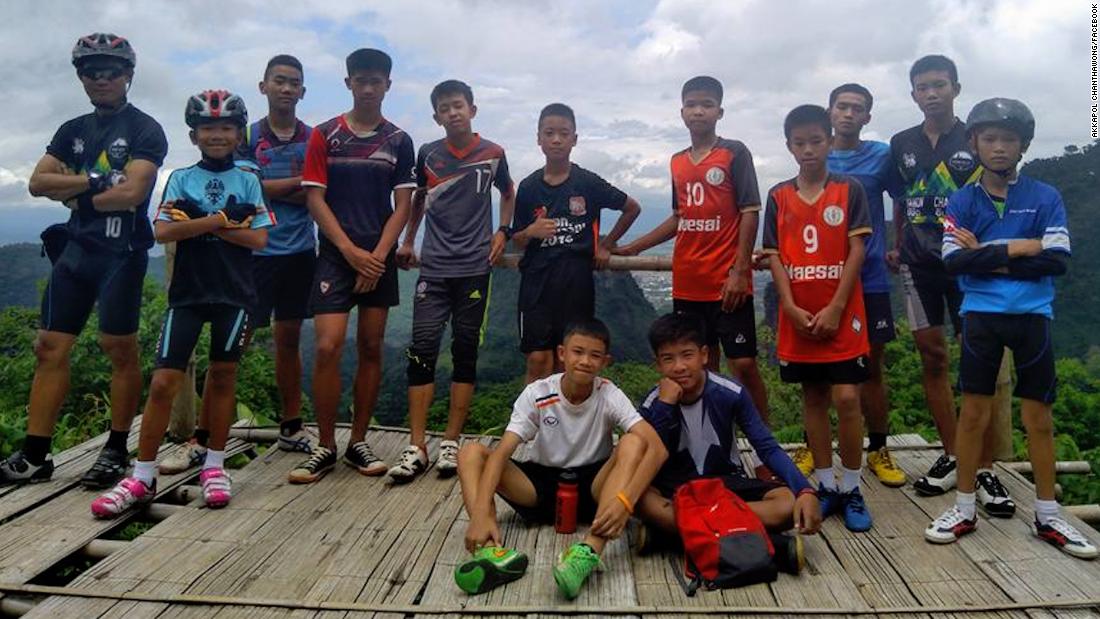 In the days following the boys’ disappearance into the vast network of tunnels, rescuers had focused on reaching Pattaya Beach, on the assumption that boys and their coach would go there to escape rising flood waters.
However, Osottanakornsaid when rescuers reached Pattaya Beach they found it too was underwater. Divers continued a further 300 to 400 meters where they found the team perched on a muddy incline. 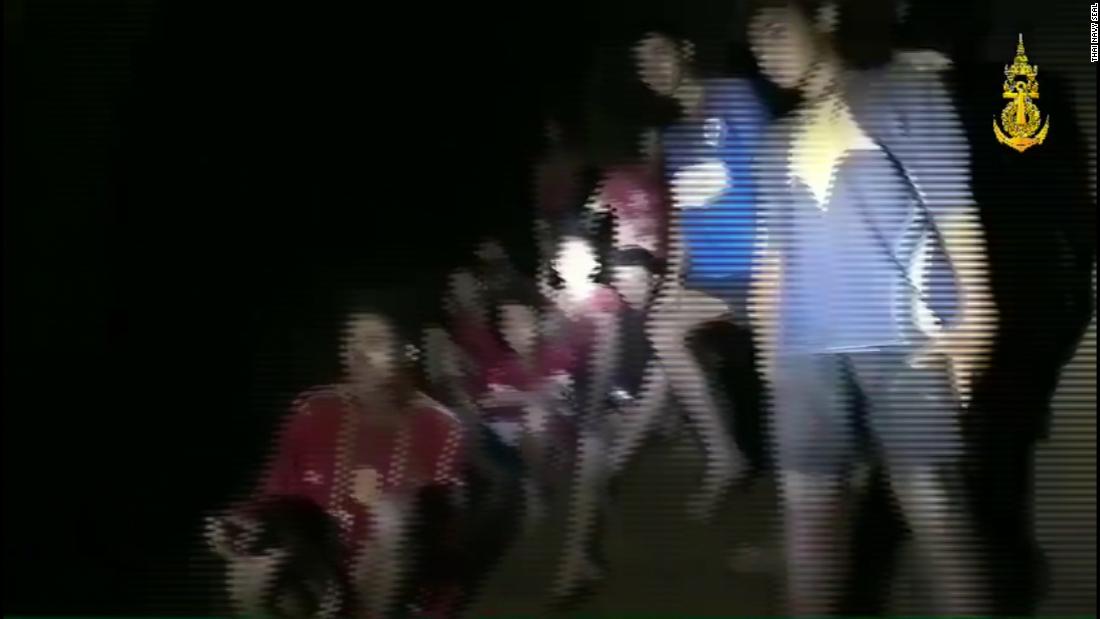 The boys were found around two kilometers (1.24 miles) into the cave and somewhere between 800 meters to one kilometer below the surface, according to a British Cave Rescue Council briefing note.
The briefing warns, however, that the danger has not abated. While Monday was relatively dry, by Tuesday the rains had started to steadily fall once again and while huge pumps are working overtime to bring the water levels down in the cave complex, any downpour could potentially set back efforts to bring the children out safely.
Amid the emotional discovery, Osottanakorn warned that the mission is “not done yet” and medical experts need to enter the cave to assess the boys.
“We will drain all water out from the cave then we will take all 13 people out of the cave. We are now planning how to send (a) nurse and doctor inside the cave to check their health and movement. We will work all night,” he said.
Capt. Akanand Surawan, a commander with the Royal Thai Navy said additional divers will accompany the doctor and nurse. Rescuers will also pump air into the cave to improve conditions.
The next phase of the operation involves supplying the team with four months’ worth of food and teaching the boys how to dive, Surawan said.
Pat Moret, a rescue consultant, said the team will likely need a lot of medical treatment before they can be moved.
“They’ll need fluids replacing (and) possibly feeding. They’re going to need reheating. They’ve possibly been lying still for days now. And sensory faculties won’t be what they should be. So I would think that they’re not really fit to move for maybe 12 hours or so really.”
Even after that, the kids and their coach may need to dive to get out of the cave, Moret added.
“Worst case scenario is that they have to dive them out. So they’re being fully immersed in water, wearing what we know is a full face mask or maybe even some sort of commercial dive helmet to make it a little less stressful for them. But it will be a truly terrifying experience,” Moret said.

Thais across the country, who have been following every twist of the nine-day long saga, reacted to Monday night’s news with joy and relief.
One Thai twitter user said that he was “crying in (a) taxi” at the news.
Many had been posting cartoons of the rescue attempts, and by Tuesday the drawings had changed into pictures of gratitude.
Thai-language papers uniformly led with the boys’ rescue in their Tuesday morning editions. 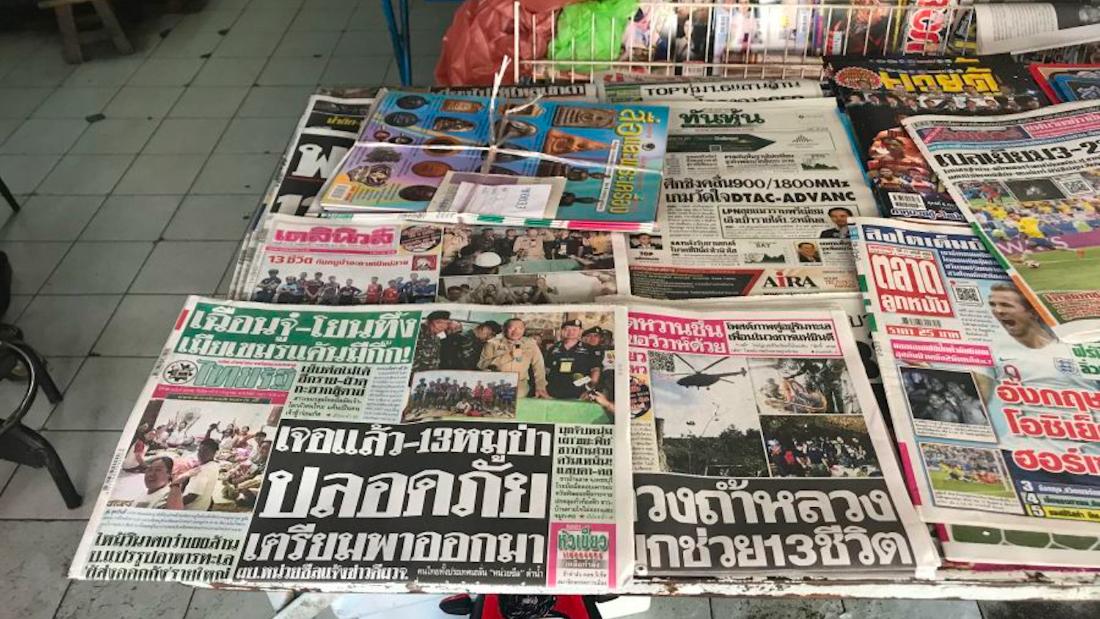 Thai Prime Minister, Prayut Chan-o-cha, said he was delighted with the news, according to Thai state media.
In an article published in the National News Bureau of Thailand, the Prime Minister thanks the army, police, volunteers, the general public and the media for working together and making the rescue operation a success.
“This incident has shown the unity of the Thai people… Today is a good day for all Thai people, including the families of the children,” Prayut said.
A park officer first sounded the alarm on June 23 after spotting the boys’ bicycles near the entrance to the off-limits cave complex.
The cave is popular with tourists who venture into the cavernous entrance, however the tunnels narrow to the point that it’s only possible to crawl through them. The tunnels open into wider chambers, and it’s in one of those chambers that the boys were found.
« $45,000-per-year private school in uproar over plan to ‘segregate’ students by race » Russian Bots Linked To Viral Twitter Attacks On ‘Hateful’ Dems