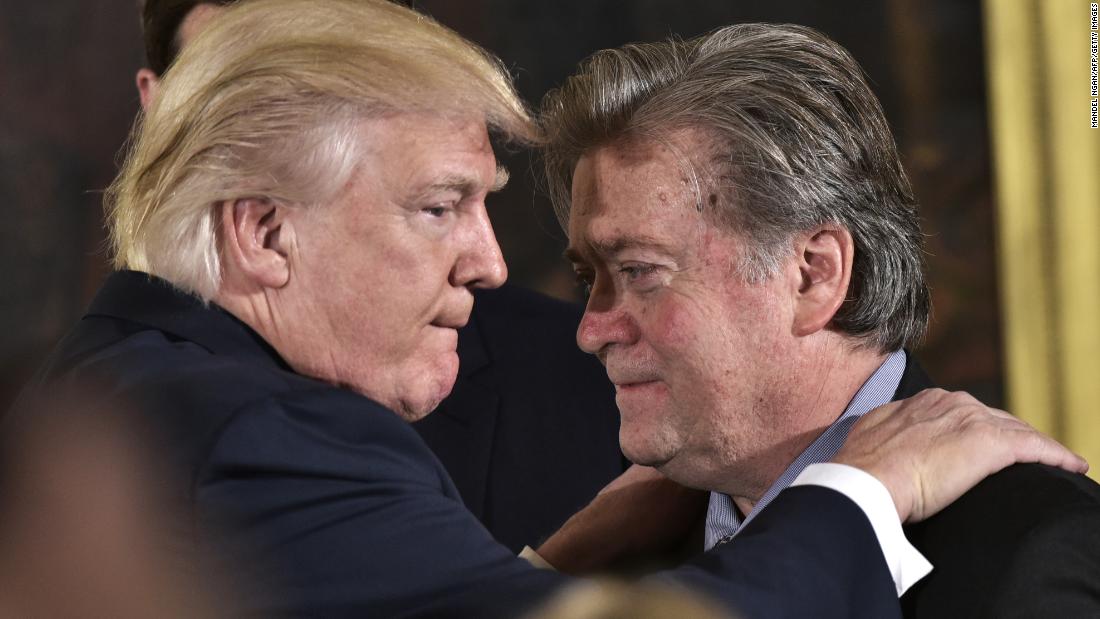 Washington (CNN)President Donald Trump excoriated his former chief strategist Steve Bannon in a statement Wednesday, claiming that Bannon “lost his mind” after being pushed out from the White House.

The White House released the strongly worded 266-word statement from the President slamming Bannon after excerpts from a new book quoted Bannon as calling the meeting between a Russian lawyer and the President’s eldest son, son-in-law Jared Kushner and then-campaign chairman Paul Manafort “treasonous” and “unpatriotic.”
“Steve Bannon has nothing to do with me or my Presidency. When he was fired, he not only lost his job, he lost his mind. Steve was a staffer who worked for me after I had already won the nomination by defeating 17 candidates, often described as the most talented field ever assembled in the Republican party,” Trump said in the statement. 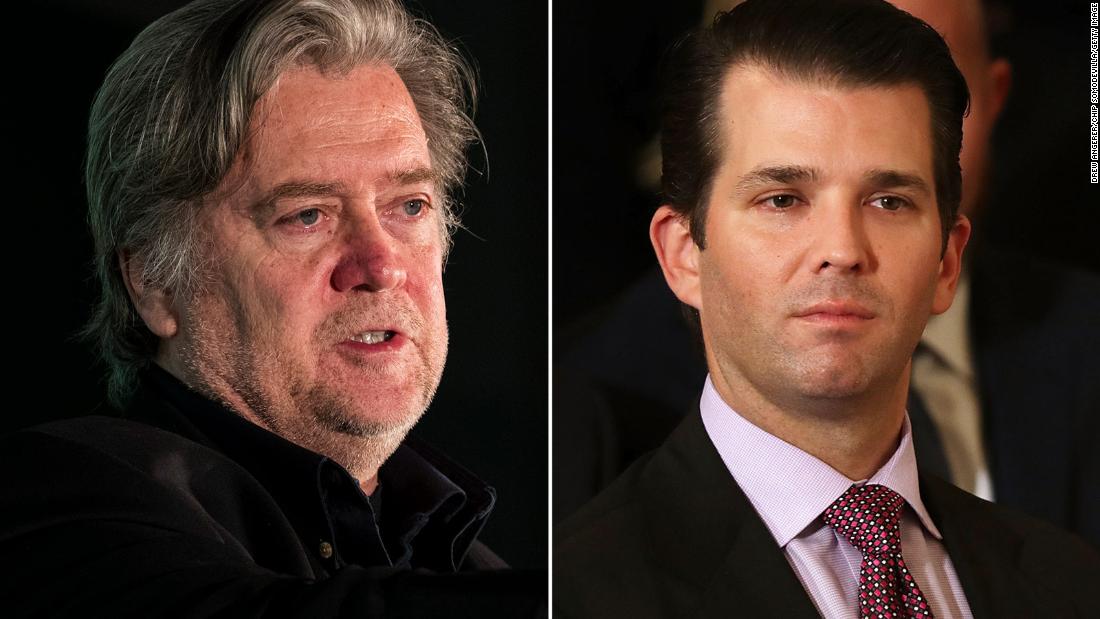 Bannon did not immediately respond to CNN requests for comment.
Trump’s fiery statement marked the most significant rebuke by the President of his former chief strategist, who since leaving the White House has maintained an influential position as an informal adviser to Trump and a de-facto leader of the President’s populist movement.
“Now that he is on his own, Steve is learning that winning isn’t as easy as I make it look. Steve had very little to do with our historic victory, which was delivered by the forgotten men and women of this country,” Trump said.
Trump also accused Bannon, who has called the mainstream media the “opposition party,” of being too cozy with reporters and spending much of his time inside the White House leaking “false information.” 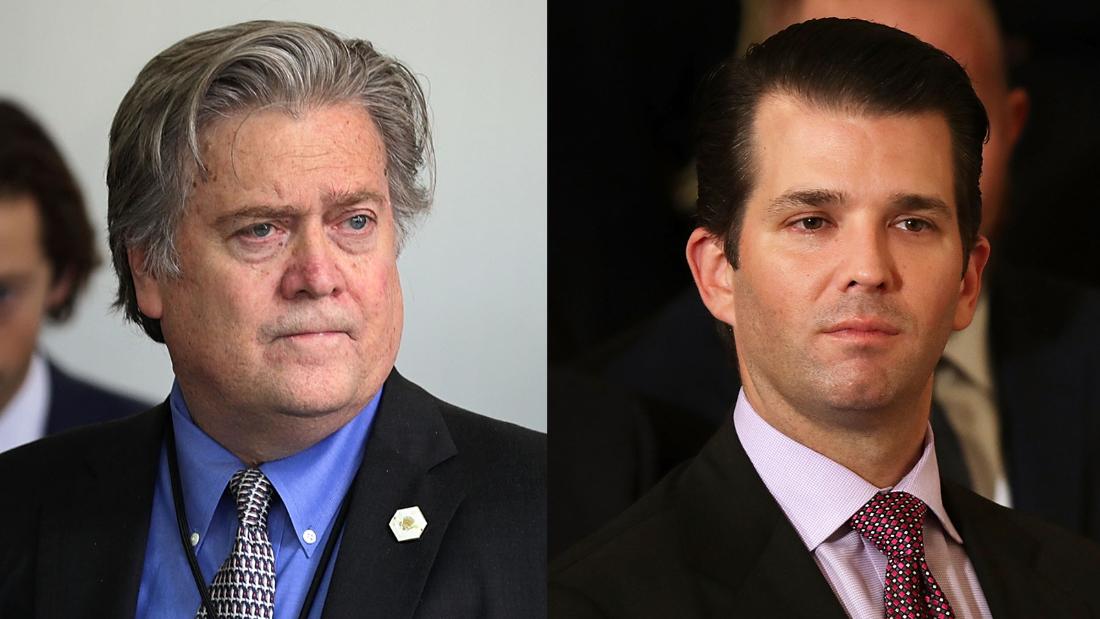 Toobin: Bannon had a real ‘axe to grind’

Bannon only joined Trump’s campaign in an official capacity in August 2016. But the Breitbart News chairman became one of the most influential forces inside Trump’s hectic campaign during the most critical periods of Trump’s battle with Hillary Clinton for the presidency. He and Trump bonded over their shared instinct for bare-knuckle politics and similar outlook on the core issues of Trump’s campaign, such as trade and immigration.
In his six months inside the White House, Bannon was one of the President’s most influential advisers, leading the charge for Trump to keep some of the most far-reaching and radical campaign promises and reminding Trump of the expectations of his political base.
He was pushed out of the White House amid retired Gen. John Kelly’s house-cleaning upon taking over as chief of staff in the summer. But he retained an influential position as one of the coterie of informal advisers the President regularly speaks with by phone, often to the dismay of some of the President’s top advisers who have clashed with Bannon.
White House press secretary Sarah Sanders confirmed Wednesday that Trump and Bannon spoke as recently as last month — even as she backed up Trump’s claim that Bannon “lost his mind” after he exited the White House in August. 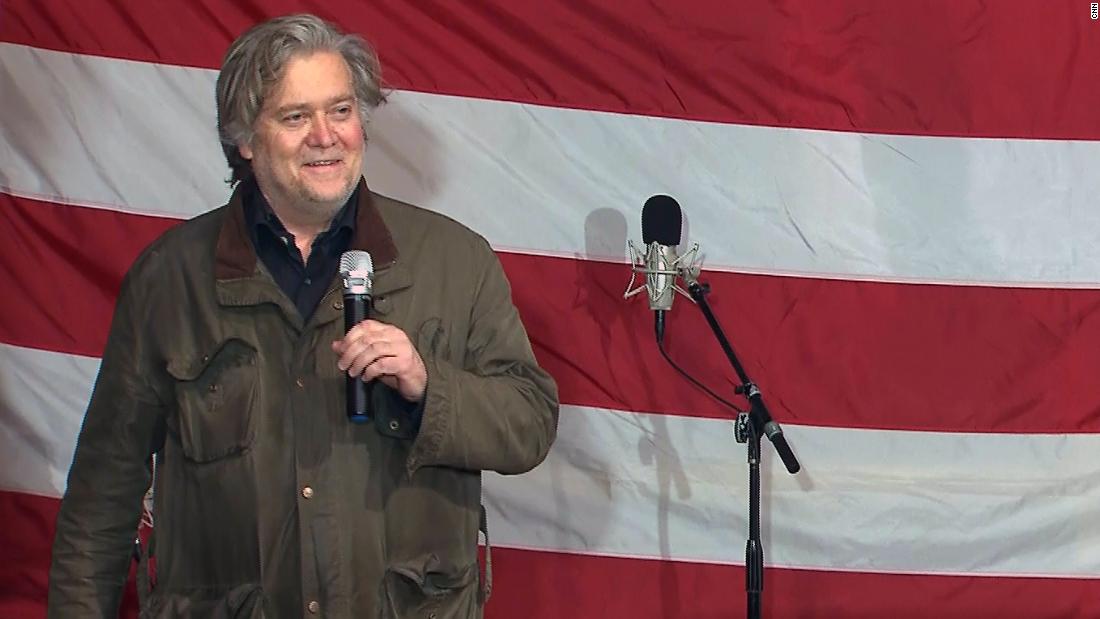 Bannon maintained that he could be even more powerful outside the White House and by some measures he has become a more influential figure. He has returned to helm the right-wing website, Breitbart, and is working to create an influential political network to back candidates who fit the nationalist-populist vision of conservative politics that Bannon and Trump have championed.
But as the 2018 midterms approach, Bannon’s access, influence and power are now all in question after his comments to journalist Michael Wolff in the forthcoming book “Fire and Fury: Inside the Trump White House” hit perhaps too close to home for the President. 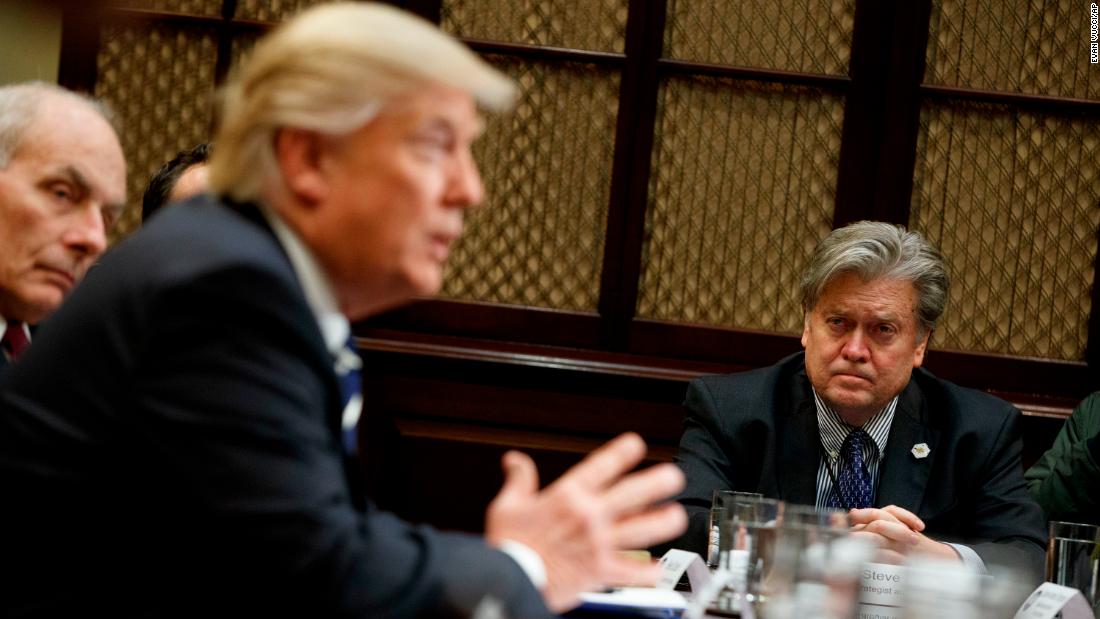 In excerpts published Wednesday by The Guardian, Bannon is quoted criticizing Kushner, Manafort and Donald Trump Jr.’s decision to take a meeting with a Russian lawyer the President’s son believed would bring him incriminating information on Clinton from the Russian government.
“The three senior guys in the campaign thought it was a good idea to meet with a foreign government inside Trump Tower in the conference room on the 25th floor — with no lawyers. They didn’t have any lawyers,” Bannon told Wolff. “Even if you thought that this was not treasonous, or unpatriotic, or bad shit, and I happen to think it’s all of that, you should have called the FBI immediately.”
Sanders said Wednesday during the daily briefing that Trump was “furious” and “disgusted” by Bannon’s comments and called accusations that Trump Jr.’s conduct was treasonous “a ridiculous accusation.”
“Going after the President’s son and in an absolutely outrageous and unprecedented way is probably not the best way to curry favor with anybody,” she said. 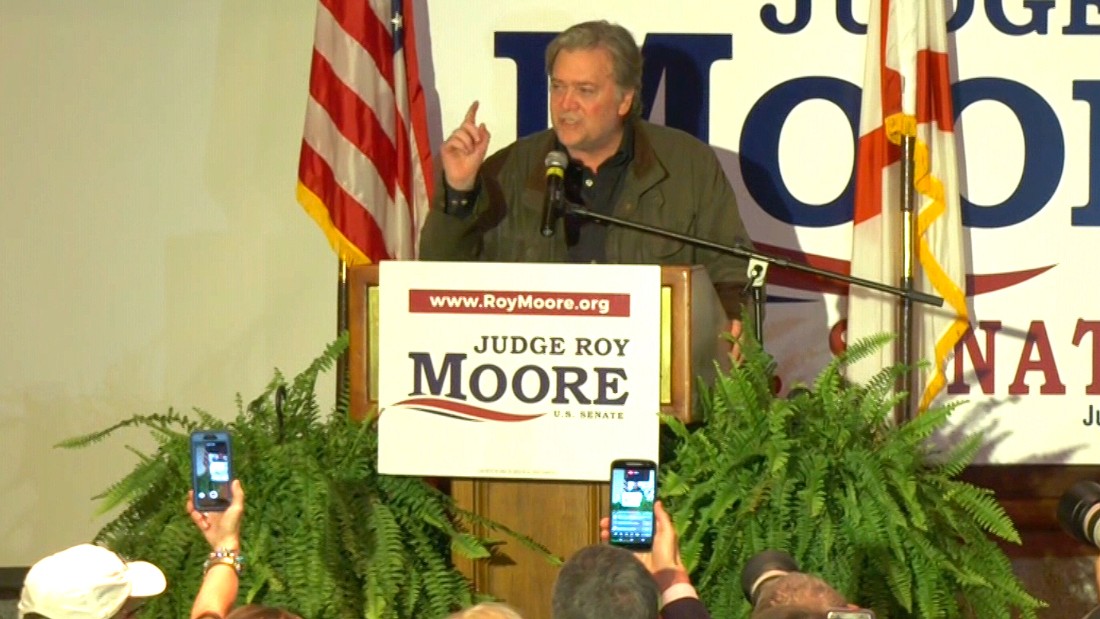 Trump in his statement also needled Bannon over his failed gamble in the Alabama Senate race, saying that while Bannon had “very little to do with our historic victory … Steve had everything to do with the loss of a Senate seat in Alabama held for more than 30 years by Republicans.”
Bannon backed the eventual Republican Senate nominee Roy Moore in the GOP primary — while Trump initially backed the incumbent Sen. Luther Strange — and continued to campaign for Moore after the nominee was accused by multiple women of sexual assault and sexual misconduct with teenage girls. 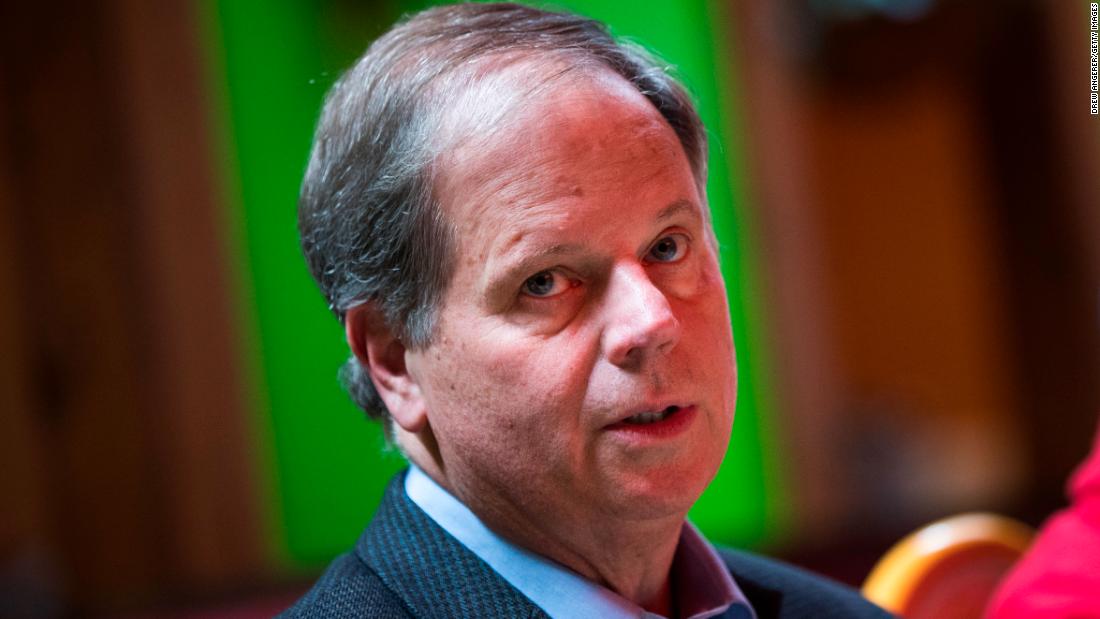 While Bannon failed to get Trump on board with Moore during the primary, he did ultimately help convince Trump to back Moore during the general election contest — in spite of the allegations and the wave of Republicans rescinding their support for Moore.
« Ellen Page And Girlfriend Emma Portner Are Married » No place for ‘snowflakes’: Conservative Christian college poised to open in 2018